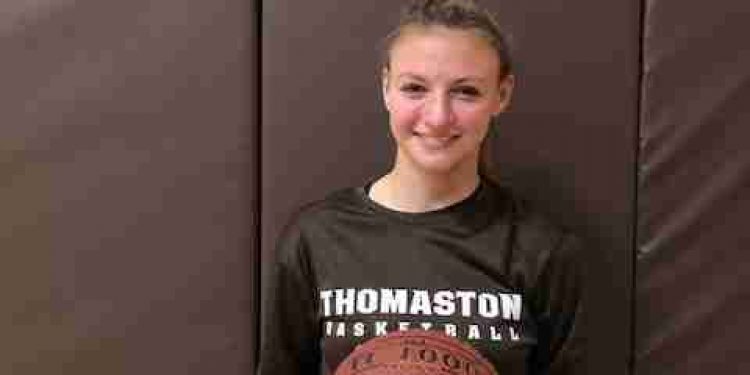 Fate in the form of Covid-19 robbed Emma Kahn of where she could play. But it could never touch how she played. And Kahn, robbed of the chance to do her thing at the promised land of Connecticut high school basketball, Mohegan Sun, where they play state championship games and produce memories for a lifetime, has played the heck out of the game.

The sleek 5-foot-10 All-State guard ended her eye-opening career in March with a 22-point, seven rebound gem to lead Thomaston to a 57-42 victory over Nonnewaug and the Berkshire League Tournament title.  One final time the focal point of the first undefeated season (15-0) in the proud history of Thomaston High girls’ basketball.

It was all on display here – the shot (four 3-pointers including a doozie of a bankshot at the end of the first half), the deft passing touch with a couple of needle threading passes for scores and the defense (holding All-Star guard Amy Henessey to just 10 points).

It was the way good ones go out, one final `remember me’ performance to file under`save’ if you ever need to be reminded. That shouldn’t ever be the case, but time naturally dims the memory in some cases and Kahn never saw the big stage which keeps images timeless.

Thank-you Covid-19. The Bears were headed for a quarterfinal matchup in 2020 against a good Putnam team before the season was called in the middle of the tournament. This season it was preordained there would be no state tournament, no out of conference games.

Kahn’s game deserved better. So many players want the big stage, her game demanded the big stage. Fans, opponents outside the Berkshire League area deserved to see her big game.  Kahn so wanted the stage. She grew up watching Thomaston live at Mohegan Sun (2013-2017). She had gotten a steady powerful whiff of the atmosphere.

She had performed on the Mohegan court as a `Trotter’, part of the Thomaston recreation program. She saw parades in and out of Thomaston escorting the mighty Bears. She saw a town fall in love with a program and a program fall in love with a town.  How she wanted her opportunity to be in the parade, to be on the bus, the photo shoots, the championship, to get her turn.

“We were robbed from the experience,” said Kahn. “I always wanted to go to Mohegan. It is so cool. I knew we had a chance my junior and senior year. But I was not completely able to show my game as a player.”

“Not having the chance to go to Mohegan hurt for all the players,” said coach Bob McMahon. “Emma in particular is a two-time All-State and All-BL player that never got to show everybody what she has become. “

And what she has become is simply one of the best.  She didn’t score a thousand points or play for state titles. Many didn’t get to see her play, this season reduced to crowds of 20-50 due to Covid restrictions. But opponents, opposing coaches and her teammates and coaches will tell you how good.

“We have been blessed to have many talented players and when we have discussions about our best, she has to be in it now,” said McMahon. “There is nothing she can’t do. “

In a program that has earned state-wide respect in the last 15 years with a pair of state titles, five straight Class S finals in a row (2013-2017), and eight BL titles and BL Tournament crowns along with a bevy of All-Staters, Kahn now walks in the most special wing of Bears’ basketball where only the special are admitted.

Legendary Northwestern Regional coach Fred Williams knows how good Kahn is after being victimized by an 18-point six rebound game in a 54-29 loss that decided the BL title.

“Emma Kahn is the best player in the league,” he said. ‘She can play defense, run the offense and is a very good shooter. There is no one that does all the things that she does and does well.”

“She is a different player,” said Brutting. “I don’t remember a guard that long. (Thomaston) has had a lot of great guards but not with her size and strength. It would be fun if we had a time machine, wouldn’t it?”

Kahn was no sure thing in her early days. She showed promise in middle school but was one of many. But while many in her class dropped by the wayside, she persevered, and the bloom was on come sophomore year.

“I always wanted to be good but in 7th and 8th grade I was shorter and an average guard,” said Kahn. “In 10th grade I started to get more knowledge and see the floor. I could drive and finish layups. I was shooting better. It all clicked, offense and defense. “

Both Kahn and McMahon saw the possibility of taking it to another level that sophomore year – Kahn on the performance level, McMahon on the leadership level.

“We were playing against Lewis Mills and I scored 18 points and was able to shut down Sammi Chadwick, their best player,” remembers Kahn.

“We were a team looking for answers her sophomore year and were going to play Trinity Catholic (eventual state champion) in the state tournament,” said McMahon. “We knew we were overmatched; they had a really good player in 6-foot-4  Iyanna Lops. I came up from halftime and heard talking and heard Emma Kahn telling everybody what to do. She took over at halftime and never looked back.”

Kahn led the Bears to a 16-8 mark in the 2019-2020 season before Covid took over. All the time becoming a hard-to-guard matchup problem for opponents. Rangy with a deft three-point touch, she also had learned with her speed and size that she could get to the hoop.

This season nobody had any answers as she led the Bears to double digit wins in every game.  The tangible legacy will share time with the intangible. The numbers and title speak volumes but maybe what she has meant to her teammates tells a louder story.

“Emma is such a great role model. It was an honor to be her teammate,” All-Star teammate Sydney Eggleton told the Waterbury Republican after the BL Tournament win. “It has been an honor to be her teammate. She has done so much for the program. She brings so much energy and passion to the game. Her greatest gift is her unselfishness. She is always there to lift up our spirits.”

Kahn now moves on, but she will remain a Golden Bear, taking her game to Western New England University with the same nickname (different colors – blue and gold) where she will hook up with another member of the Thomaston pantheon, Julia Quinn.

“I’m excited to further my career and having Julia there is amazing. I’ve always looked up to her,” said Kahn.

“I don’t think we know how good Emma is,” says McMahon. “She’ll go to college and take her game to another level.”

Emma Kahn feels a little bit cheated but here’s another thought. The ones who got cheated were those who missed what she offered up on the court. In the meantime, she made the utmost of her stage.

And now she gets to walk in some mighty fine company at the Bears’ finest basketball table where only the special dine.