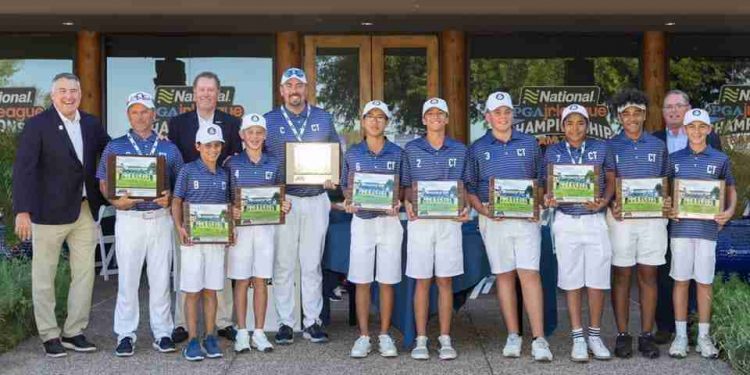 A memorable weekend for Sparks, Bunel and Team Connecticut

Who was happier than Bobby Sparks and Jim Bunel Sunday afternoon (Oct. 10)? Don’t pop a blood vessel trying to figure it out. Simple answer, probably nobody in this area. I mean who else was watching a bunch of unflappable, not old enough to drive, shave or walk a high school corridor contingent play for a national championship on national television (ESPN 2)?

Pretty cool stuff you might say. Team Utah took the title with a 7.5-4.5 win but if you were looking for tears try the crippled New York Giants camp or check in with those who have to play against Phil Mickelson on the Senior PGA Tour (another win for Lefty). Nothing to be found here.

Connecticut has its share of golf talent both young and old but the old Nutmeg State and Northeast in general isn’t exactly a year-around golfer’s paradise unless you have a basket of orange balls and snowshoes. These titles are usually played for and won by the bigger warm-weather states. Can you say California and Georgia and the likes where the clubs stay busy year around.?

But here were Captain Sparks and Coach Bunel’s young studs, already one of the best, looking to be the best. There was a fair share of fingernail gnawing and sweating going on. Oh, not from the players, from the coaches.

“I was pacing. The parents and us were more nervous than the kids,” admitted Sparks. “The kids had no fear at all. They were doing their thing.’

And Connecticut played the heck out of the game.  They beat No. 1 seed Florida, 7.5-4.5 in the semifinals. They took the opening match against Utah before the winners unveiled some hot putters and drained a couple of long ones.  All unexpected? Careful on that one.

“Maybe it was somewhat of a surprise but going into this time I thought we could turn some heads and we did that,” said Sparks. “We’ve been there twice before and there was some we’re just happy to be there. Not this time. They changed the format this time and it was two 18-hole qualifiers instead of match play and that set us up good. We were eight-players strong. “

All done with a five-week prep that included one practice and one match a week and the aid of Torrington C.C. which allowed Sparks to have the program.

Sparks was back at the office Wednesday, still trying to figure out the jet lag and still lost in the glow of a memorable weekend with a group of memorable young golfers.

As for Bunel, He was still dancing to the joy of experience, the kind of two-step an extended birdie binge couldn’t even produce.

Naturally we wanted to win the final match. We did not. However, to say these kids fell short would be an insult to them. They played their guts out for not only their teammates but also their families and entire state of Connecticut. So very proud of them and what they accomplished this year.”

Those kids? Authors of a big-time accomplishment and long-time memory. Those stars of the show – North Chery of Monroe, Rob Rosati of Stratford, Luke Hoglund of Fairfield, Ken Fernandes of New York, Will Lord of Suffield, Jack Chung of Greenwich, Rocco Capalbo of Westerly and Brennan Meyers of Kensington.

The kids of Connecticut and a pair of proud coaches took possession of an October Sunday afternoon and made it their own. Pretty cool stuff.