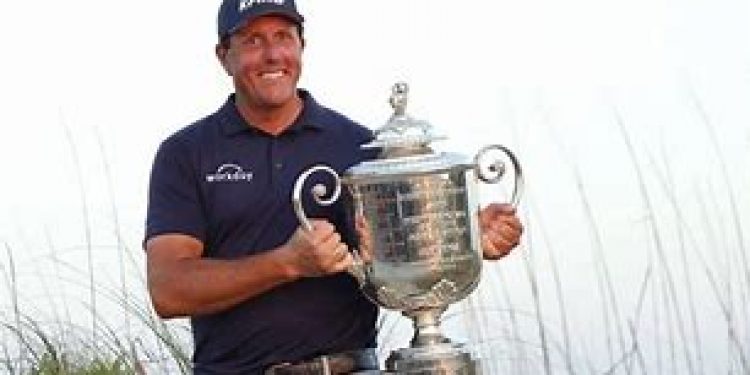 A weekend with Phil and ‘One More Time’

All we want is one more time from the teams and individuals that seized our passions so long ago and never let go.  One more trip to the mountain top, one more title, one more delicious moment. We don’t want it to end, nor do those who create it all. Jimmy Connors gave us one in 1991 at the U.S. Tennis Open, with an unexpected journey to the semifinals at the age of 39, the five-time champion once again lighting up New York with the brilliance of Broadway.  But most of the time there is no one more time. The time at the top has to end sometime and more often than not it passes us by without us noticing. Lost in our loyalty we know it will happen again and when it doesn’t and that realization sets in the passion almost demands a desperate pleading.

Phil Mickelson gave us one more time with his victory in PGA at the age of 50 years and 11 months. Out of nowhere he lit up a Sunday afternoon and the golf world in May like Connors did to New York 30 years ago.  He was `Phil the Thrill’ one more time taking all on ride we thought was five exits passed the possible turnoff. Even the seagulls at the pristine Kiawah Island course in South Carolina took notice with appreciative screeches.

It was glorious. The jubilant mob of fans that followed Mickelson up the 18th and eventually engulfed their conquering hero gave testament to and immortalized the magic of the moment.  Let time stand still for a moment. The oldest to ever win a golfing major. One for the ages.

There was no hint here.  Mickelson had more cuts this season (six) than top-25s (2). He hadn’t won in two years and the last major was back in 2013 at Muirfield in the British Open (also out of nowhere because links golf never suited his game).  There was an occasional flash of yesterday, the always brilliant short game, but mostly tournaments had become lost fairways, missed putts and the inability to put together four good rounds. One good, round, maybe two then the 74 or 78. He could still play but contending had become a memory.

I thought maybe it was time Phil thought about joining the Senior Tour. Wider fairways, venues more set up for his game.He dabbled there last year and won the first two tournaments he played in. At almost 51 maybe it was time.

I am as big a fan of Mickelson as anybody. He has been brilliant in victory and career, equally spectacular in defeat. He can stuff it close to the pin from behind three trees, in the middle of a bush or off a club house patio (check that one out on You Tube).  For 30 plus years he has mesmerized.  It has made for a passel of joyful Sundays. Then there has been the other side. Phil tortured us and him often at the buzzer and went down in burning flames. He lost with pizazz and style. He hit tents and trees. So many times I would turn on the TV and he was in the swamp, that patio again or in the next town. Six runner-ups at the U.S. Open, the only major he hasn’t won. Most courtesy of his own hand. Painful, his meltdowns have been movie-worthy epic (those are on You Tube too).

That’s been the attraction. He has made it look so easy while at the same time become a master of the golf macabre.  He was every man.  Sunshine and dark cloud. He never had Tiger’s efficiency, he was Phil the roller coaster and the two extremes have kept us glued and sitting there with sweaty palms, bitten finger nails, Peptol Bismol and permanent anxiety twitches.

But Phil has made the rock group Journey proud – he never stopped believing.  He has gotten himself into young shape. He has worked to add club speed and pounded it distances that put him up there with the big boys. The short game has never withered. He has dieted and looks slim and trim with an admirable diet regimen. And his done it with a smile and a flair with more than a next generation Arnold Palmer essence to him.  Barstool loves him, more than one generation has stayed glue to the guy with the aviator sunglasses who can hole out from 150 yards or hit a passing car.

So maybe we weren’t seeing it because the scorecard wasn’t seeing it. For all the effort to stay golf relevant, you can’t outrun father time, right? Maybe we can be forgiven. He had his `one more time’ eight years ago.

Then came the 2021 PGA. Phil was 200-1 by Vegas odds. He needed a special invitation to get to the U.S. Open. Nothing happening here. I was hoping he would just stay in the game for the first round. Don’t fall 10 shots back. And Phil shoots 70. Ok, but I still expected the blow-up score at blustery Kiawah in round two.  Just make the cut, will you.

Phil continues to confound and goes out to fire a 69 and he’s tied for the top spot halfway home. I have no illusions at this point but now it’s going to be a Phil weekend and that’s enough for me. He hasn’t been part of my weekend for a while, he’s usually home. My wife knows she’s lost me for Saturday and if the improbable happens the entire weekend, which may or may not be a good thing. I’m getting calls from my son, Jon, who knows I bleed Phil. “Dad, he just might do it,” he says. I’m still waiting for the inevitable disappointment.

I don’t think I moved from the couch for all five hours or so Saturday afternoon except to visit the bathroom. My wife might have talked to me or left the house and flew to the Bahamas, I didn’t notice. I cringed, got irritated, uttered more than a few, “here we go agains,” as Phil had a five shot lead at one point and then saw it go down to a shot by the end of the round.  The letdown beckoned but even with a couple of bogeys he kept it together.  Going into the final round of a major up by a shot at the age of 50. I was kind of crazy. We went out to eat after and I was a solid conversationalist. I called three people Phil and ordered a PGA title with cheese and onions.

Sunday morning I donned my greem Phil the Thrill tee-shirt with the the trademark thumbs up logo and we made the trek to my sister’s house for dinner in Glastonbury. The stomach was doing flip-flops. There were about 10 of us and I was the good guest because we got there early.  I exchanged pleasantries and then got lost into the other room. Phil’s tee time was 2:30 and it was fill up my plate and don’t bother me as I moved to the couch. My brother Gary and I took it all in.

I’m still expecting Brooks Koepka to shoot like 68and Phil to shoot 70-something and trying to prepare myself to the idea that at least he gave it a go. He loses the lead on the first hole and here we go. Back and forth.  No meltdowns but hiccups. Up a couple, tied, up five early on the back. A couple of bogeys and suddenly it was two. Let the sweat pour.

We left my sister’s after the 11th hole. The drive home my wife was giving my play-by-play from the back of the car as I made Route 84 my own Daytona speedway. We got home to Thomaston for the 15th hole. My son Jon came in. We watched Phil birdie and launch a 366-yard bomb on 17. When he kept the ball in play on 18 and then planted a nine-iron 15 feet from the cup on 18, it was over. The iconic scene on 18 was a coronation for the comeback kid. My son claims he saw a tear in my eye. I won’t deny it.

But I’m sure I wasn’t the only one. Phil gave us the ultimate gift – one more time at a time when we thought that was gone.  I went to bed with a smile. A week later I’m still smiling. Got one more, Phil? Only kidding. At almost 51 I won’t push it. We will always have this. One more time. Enough said.