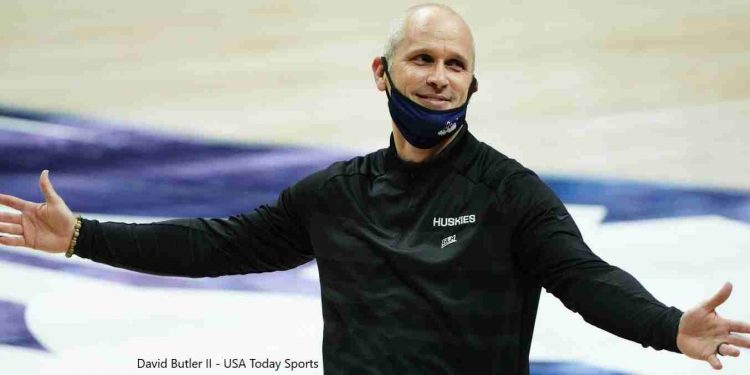 After a strong season, bigger things are on the horizon for UConn

In the day since UConn’s 2020-21 season came to an end in the first round of the NCAA Tournament against Maryland, I’ve been thinking about what the main highlight of this year was.

You have James Bouknight’s electric 40-point game against Creighton, Tyler Polley’s three-point clinic at Marquette, the destruction of DePaul in the Big East Tournament and few others as well. But as I thought more about it, all I could think of was last night. And it’s all I could think of right now.

Yes, it was ugly. Yes, it was a game that will drive Dan Hurley nuts every time he thinks about over the next few months. But the fact there was a last night is the Number 1 moment to me.

After seven years in the AAC, the brutal ending to Kevin Ollie’s tenure along with the legal issues it’s brought, numerous injuries, and the pandemic halting the postseason last year, it’s been a rough half-decade in Storrs. Whatever could go wrong, seemingly did.

Last night, those previous issues did not exist. The fan base was on edge, screaming at everything on Twitter, living and (mostly) dying on each shot. When the game was over, you could feel their devastation, lamenting what could’ve and maybe, should’ve, been. The game, on the sport’s biggest stage, was all that mattered.

One year from now, though, there are no more moral victories. UConn is officially back. Back in the Big East, where it belongs, and back in the national conversation, where is spent three decades prior to the end of Ollie’s stint as head coach.

A loss like last night’s, simply, won’t be tolerated in the future and Hurley would be the first to admit that. Losing Bouknight to the NBA is tough (he’s not coming back as some suggested he do after struggling last night), but Hurley has shown he’s a top-notch recruiter and next year’s class is amongst the best in the nation. The talent will continue to come in.

Now, it’s time to succeed on a higher level with it. In press conference after the Maryland loss, Hurley pointed how they were “scared to death of that matchup” with Terrapin guard Eric Ayala. Going forward, they should not be the ones scared of matchups, it should be the other way around, especially if they’re the higher seed as they were last night.

On multiple occasions, Hurley called this the “irregular season” due to everything surrounding COVID-19, with games getting postponed and cancelled, practice times scattered, and general uncertainty. This group of coaches and players deserve immense credit for how they’ve handled everything since being forced on a plane to come home early after the AAC Tournament in Texas was suddenly called off last March. It wasn’t easy and you could see, at times, the toll it caused, from Hurley on down.

Presumably, fans will be back for good at Gampel Pavilion and the XL Center in the fall. The atmosphere for the Big East Conference games, in particular, will be wild and no one will accept any moral victories – as they shouldn’t.

This season, notably last night’s ending, has set the tone for that. There’s no other way to look at this campaign as a success. Now, it’s on to even bigger things.