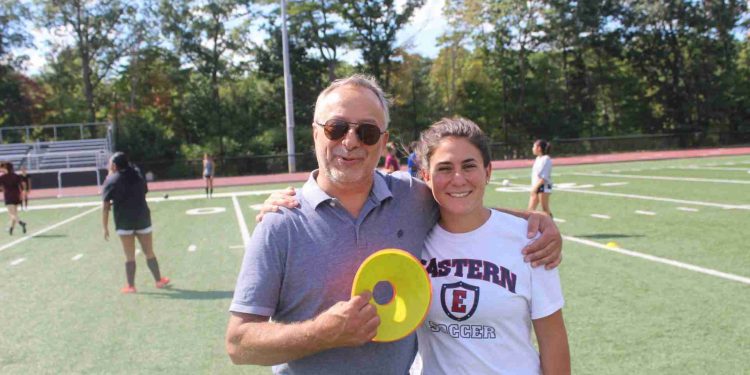 Alot to like despite final score in THS girls’ soccer opener.

Torrington: The final score may not have told all the story Friday night as the Torrington girls soccer team dropped a 4-1 decision to visiting Ansonia in their season opener.

Take away a pair of bad bounce balls that found the Raiders net in the first half as the Chargers ran out to a 3-1 lead after 40-minutes and this became an evenly matched contest between a pair of talented teams.

It also marked the much-anticipated debut of Raiders assistant coach Alexis Tyrrell who joins head coach Mario Longobucco this year, her first since a spectacular career in soccer and softball at Eastern Connecticut.

Her energy and enthusiasm were on display from the opening whistle and will be an invaluable tool in the development of this team in 2022.

In lots of ways.

All Tyrell did at Eastern was step into the nets when all three goalies got hurt and played so well, she never left.

With two goalies playing tonight, junior Delilah Depietro and freshman Ashley Pasqual-Aqino, Tyrrell will have plenty to say about technique on the pitch, something she figured out pretty well during her time in the net.

Like talking with forward Vanderee Fritch during the game about positioning ahead of an incoming pass that could lead to a run down the sidelines and on goal.

Fritch would connect for the Raiders lone goal moments after the Chargers went up 3-0 late in the first half off an assist from fellow junior, Kaitlin Allen.

The second 40-minutes was a much better half for the home team as the Raiders started to find their rhythm.

This is a team with a core group of seniors (Molly Jones, Rachel Brewer-Karimi, Brianna Murelli and Jadyn Morales) along with a dozen juniors.

Seven of those juniors start and have played a great deal of soccer together.

The entrance of Pasqual-Aqino in the second half clearly sparked the Raiders as the first-year goalkeeper came up with several key saves in the half.

The Chargers would break through one more time with just over six to play but lessons had been learned by then.

Sometimes teams take a minute to find their footing in a new year.

There is plenty about this Torrington team to like and it appears that better days are ahead.

Torrington heads south on Monday to take on Derby.