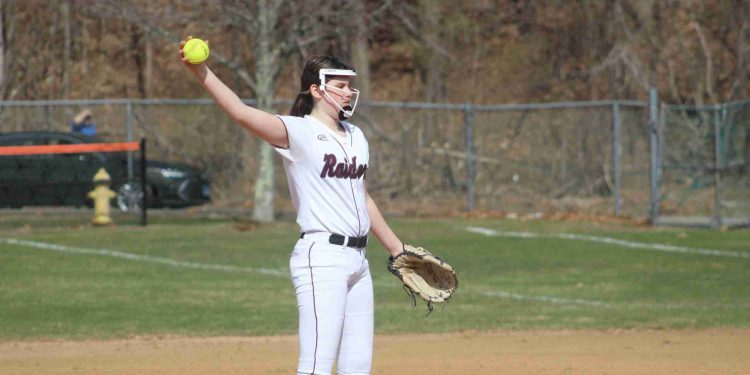 TORRINGTON: Sometimes, it’s not how the table gets set, it’s how you clear it.

With the Torrington girls’ softball team up 3-1 over visiting Holy Cross in their home opener of a much-delayed 2022 campaign, junior Amelia Boulli had one of those table situations that needed attention.

In the top of the fourth, the Crusader had a run in after three consecutive singles up the middle, left runners on second and third with no outs.

This after the home team had plated three over the previous three innings, their first three of the season after being blanked 5-0 by Woodland the only other time they were able to get on the field.

The odds of getting out of a jam like that were not good. A sacrifice fly, a bunt, a wild pitch. Too many things were on the menu, and all pointed to a tie game if not worse.

The junior hurler though, had a different idea,

Boulli cleared said table by striking out the side, the last one looking and the threat, and the chances of a visitors win went by the wayside in an eventual 8-1 win for the Raiders who di an awful lot of things right.

Their rough start that saw them garner just two hits against Woodland in a game their head coach, Sarah Arburr was caused by being out of sync.

“Against Woodland,” Arburr said, “They were nine individual players, not working together towards a common goal. Today, we were a team, working as one.”

Faces the defending Class M champions in the Hawks was not ideal but it may have woken the Raiders to the fact that the level they saw against Woodland was one they needed to ascend to.

“We had three goals coming in,” Arburr said. “One was to come out with that swag that we didn’t have against Woodland. We also wanted to punch a run across in the first four batters.”

That second goal was made right on schedule, produced by taking advantage of a Crusaders mistake early.

Leadoff batter Rachel Brewer-Karimi reached on an error, caused somewhat by her speed as the Holy Cross first baseman failed to secure the throw.

Senior catcher Marissa Burger did her job by bunting her teammate over into scoring position before freshman Lila Boulli launched a booing double into the gap for the 1-0 lead.

Lila Boulli also showed off a strong arm in center, nearly gunning down the only Cross run in that critical top of the fourth.

Keeping the visitors at bay, led to a five-run bottom of the fourth, helped out by another Cross errors (three for the game) and a clutch single by Brianna Murelli and a sacrifice fly by Brewer-Karimi.

Meanwhile, Boulli was finding her grove on the mound, finishing the afternoon with 15 strikeouts, striking out the sides in the second, third and fourth innings.

After the three hits in the fourth the hard throwing junior would allow just one more.

If she continues performing like this, the Raiders will be a tough out, game after game.

The Raiders head to Derby on Wednesday before facing Berkshire League foe Thomaston on the road Friday at 4.