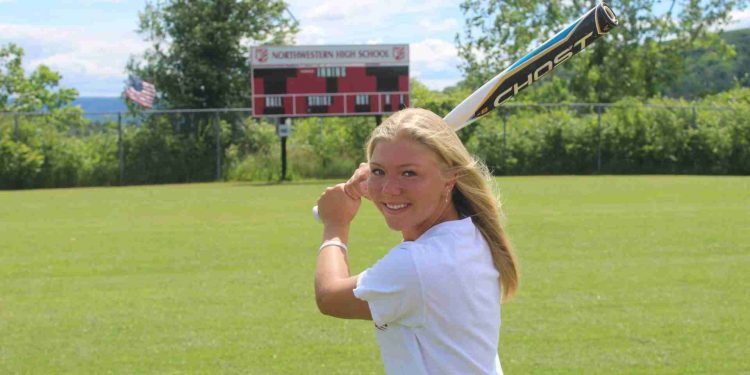 Ava Hampton off to play DI softball at Coastal Carolina

Zematis will also tell you that you need to go a little deeper than that when it comes to Hampton. She is more than just a top talent between the lines. Hampton is a student of the game, and she coaches the game.

“She came in with all the skills on the field and now I use her as a coach,” said Zematis. “She will run drills and work with less-skilled players. She has a way with her, she’s confident, not cocky. She worked with two younger players recently and they said it was the best practice ever and that they learned more in a half hour than ever.

“Ava told the team one day that they needed to go home and watch a college game and see the strategy used.  She always says positive things. She wants to be a role model, she wants the players to look up to her.”

Offering instruction and advice on a peer level can be a dicey proposition.  There is a credibility factor necessary for the relationship to work. Hampton’s acceptance by her teammates as a voice to be listened to and respected is fueled by her exploits on the field, knowledge of the game and an appreciated style.

“I like to share my knowledge with the girls and when I give them advice they trust me,” said Hampton. “I try to be nice about it. It is a situation of mutual respect. They’ve seen what I’ve done in past seasons and not one girl doesn’t want to learn. My travel coach has already told me that he hopes I come back and work with him.”

Hampton’s desire to take the game beyond the playing level was instilled at a young age through her AAU team, Rhode Island Thunder Lotti. Call it a tough love experience with great impact.

“I started playing with the Thunder at 17 and these girls had been everywhere and that was all they talked about,” said Hampton. “They treated us younger players like they treated one another. We were 14 and they were 18 and they were hard on us. Every drill they had something to say to us and they weren’t nice about it.

“At 14 I thought they were mean and harsh. But as the season went along I learned they wanted us to grow a backbone. After a while we became stronger and assertive. I thought they were wrong in the beginning, but they weren’t. I remember the coach saying that these girls will help you and  I really ended up wanting to be like them. I began taking notes in a notebook and that’s where I started becoming a second coach. “

Hampton has learned her lessons well. All those notes have been more than just words on paper. She has practiced what she preaches her to her teammates. Her success is more than just a result of physical talent.

The game starts long before the first pitch for Hampton.

“I am not sitting on the  bench talking to my friends,” she said. “My travel team has scouting reports and we watch the pitcher’s release and what her strong pitch is. We watch the infield and outfield arms. (With Northwestern) I do the same. I try to assess the other team’s players and look for things like the way they catch the ball and if you can run on them. I try to share the information with the team.”

All which has made Hampton somewhat of terror for opposing teams to deal with since she first stepped on a high school field. As a freshman at St. Paul in Bristol, she belted the ball at a .569 clip. Hampton, who lives in New Hartford, transferred to Northwestern her sophomore year, only to see the season cancelled due to Covid-19.

But she was back at it again junior season with a .471 average that included nine home runs and 20 RBI while earning All-State and All-Berkshire League honors for the BL champion Highlanders. This past season was even better hitting .522 with 13 home runs and 33 RBI while scoring 51 runs.The bat continued to pound the ball much to the dismay of opposing pitchers. All of which was a prime ingredient in another BL title.

The ball has a tendency to explode off Hampton’s bat with a penchant to find open spaces and go long distances. The numbers don’t suggest hitting prowess, they affirm the real deal. Ask Zematis who sees it on a regular basis or Coastal Carolina University (Conway, South Carolina) who recruited her.

“Ava is one of the best we ever had,” says Zematis. “She hits a long ball that goes very deep. She is the first person to hit the ball out in right center field at our field.”

A couple of things here. First, Northwestern has produced multiple top- notch hitters over the years.  Secondly, among those are Jana Sanden who is currently in the midst of a solid career with UConn. Sanden, who also earned All-State honors for the Highlanders (2019) and saw her senior season cancelled due to Covid-19, (2020), slugs the ball with the best of them.  Call it the highest of praise for Hampton.

“Ava is an explosive hitter with good movements that will translate well to the next level,” said Green upon Hampton signing her letter of intent to become a Chanticleer.

For Hampton the success with the bat is all about the mind.

“It’s a mindset. You can’t go up there timid,” she said. “Whatever the pitcher is throwing you have to say nothing is better than me. If you see it – it’s yes, yes, yes or no, no no. If you think too much you get jittery.”

Green. “The bigger the game, the better she is.”

“Playing under pressure is a priority for me.” said Hampton. “It is a weakness that has become a strength. “

Hampton will bring a versatile glove to Coastal Carolina that mixes nicely with the bat. Between Northwestern and her summer team she has played both outfield and infield. She played shortstop for the Highlanders this season.

“If my hitting stays strong, I hope (playing time) won’t be an issue,” she said.

Hampton has made her mark on the high school level with St. Paul’s and been a focal point of two Northwestern BL titles. What makes it all really cool is that the best may be yet to come.

“She knows she has big things ahead,” said Zematis.

For Hampton you get the idea that the hits will keep on coming.