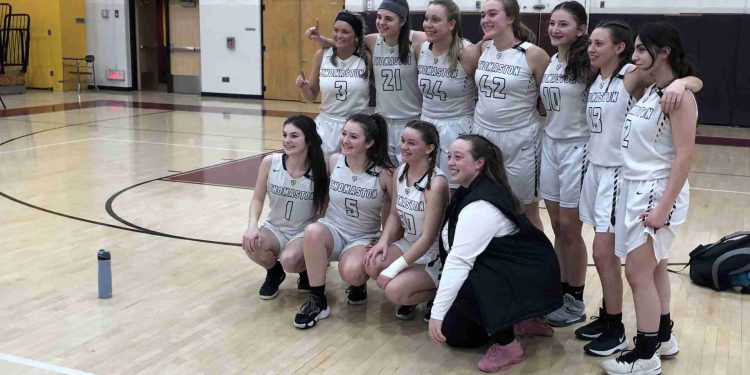 Bears off To Mohegan Sun again

NEW BRITAIN – It is the grandest destination in the Connecticut high school basketball world, the promised land for anyone who has ever dribbled, the arena of dreams – Mohegan Sun. And once again it is where the Thomaston High girls will end their season.

The top-ranked Golden Bears used a rugged effort and a superb performance from sophomore Nicole Decker to hold off a game Bolton team in the fourth quarter for a 48-42 win in a rocking and rolling and nearly packed New Britain High gymnasium Monday night.

The victory sets up the championship tilt against No. 3 Coventry, a 39-36 winner over Immaculate in the opening game of the evening, either Saturday or Sunday. It will be Thomaston’s first appearance in the finals since 2017 and sixth appearance in 10 years after a brilliant run of five consecutive appearances from 2013 to 2017.

“We loved the five straight years but it’s a new challenge every year,” said Thomaston coach Bob McMahon. “We believe in our hearts that we would be at Mohegan Sun the last few years. This team treated every game like it was a championship game”.

Decker had a lot to say about this being the Bears’ turn. The savvy point guard poured in 18 points including eight to highlight a decisive third quarter run and put the Bears up, 42-29. Bolton didn’t go away and would make a determined run at the Bears in the fourth quarter but never fully recovered.

Decker’s full game was on display during this stretch in she drained a pair of three pointers, got into the lane for a hoop and pinpointed a pass to Sanson for a basket and three-point play. Thomaston which led 31-26 at the half took a 44-35 lead into the fourth quarter.

Bolton (18-6) refused to go away in the fourth quarter and any sense of Golden Bear comfort quickly dissipated in the throes of a four-point quarter. The Bears only basket came two minutes into the quarter on a layup from Eva Harkness.

The Bulldogs slowly closed the gap and cut the deficit to 46-42 when Isabel Kenney willed home a very rim-friendly three-pointer with just under four minutes left. Thomaston then responded to the challenge with its best weapon all season – it’s defense.

The Bears (21-4) turned up the suffocation level and did not give up a point the rest of the way. Meanwhile two clutch foul shots, one from Harkness and one from Kiera Fainer with 30 seconds to go helped dry the sweaty palms.

Sanson came up with one of the biggest plays of the game when she rebounded the miss of Fainer’s second shot and the Bears were able to take valuable time off the clock.

The fourth quarter had the Bears on edge but they are also a confident bunch.

“ We were definitely nervous when they started coming back but we stayed together, we were calm and collected,”said Aurelia Barker.

“We got it where we wanted to in the fourth quarter, we just didn’t finish”, said McMahon. “Give credit to Bolton they made some shots.”

The Bears got a good omen early when Barker drained two of her three-pointers in the first quarter and added a free throw, scoring seven of her 10 points, as Thomaston built up an 18-12 lead.

“Kelly (assistant coach Finley) told me not to think about it, just feel it’” said Barker.

A 15-2 burst highlighted by four steals, another Barker long range bomb and an old fashion three-point  from Harkness  after another eye-catching pass from Decker put the Bears up 30-17 midway through the second quarter.

In the end, however, the Bears found their way to the Sun. Again!