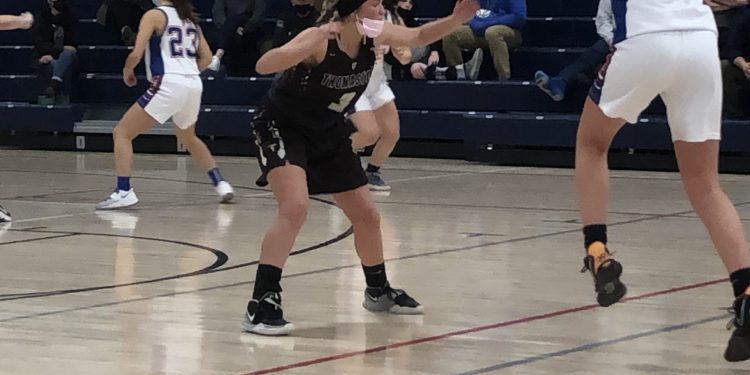 WOODBURY – Maybe you already thought that the road to the Berkshire League girls’ basketball title was going to have to go through Thomaston.

Fair enough because, well, there is the defending champion status and that is what Thomaston does – win titles.

But just in case you were wondering and had some doubts. Stop wondering and erase the doubts. There is still half a season to play but if you want to get to the mountain top the Bears are going to be standing in your way.

That was made eminently clear Wednesday afternoon.

In stunning, overpowering fashion, the Bears dismantled Nonnewaug on the road to the tune of a 49-20 score to take a two-game lead in the BL as the second half beckons. Nonnewaug dropped to 9-2 (6-2 BL) while Thomaston is 8-3 (7-0 BL).

“We have expectations,” said senior Emma Sanson who chipped in with eight points. “Some of us are seniors and we know how it feels to win.”

The Bears parlayed a voracious defensive effort with some pinpoint shooting from long range shooting (seven three-pointers) to reel of their 23rd straight BL win.

But off the court events also played a part.

A long-time, well-known area sports fans: he was also an avid follower of his son’s program, who endeared himself to the team.

“It felt like we had six guys out there today,” said McMahon. “That’s how hard we played.”

It all was an overwhelming combination.

Thomaston reeled off the first 13 points of the game, highlighted by a pair three-pointers from Barker who finished with three treys for the game and one from Payton Mozelak who had a gem of a night off the bench with four three-pointers.

It got no better for the Chiefs.

Thomaston led, 16-2 at the end of the quarter and 31-7 at the half. Thomaston’s trapping, suffocating defense ramped up the pace of the game to an uncomfortable, irritating level and Nonnewaug was never able to adjust.

“(Thomaston) gets up and really, really gets into you,” said Nonnewaug coach Toby Denman who was sitting in the big chair due to head coach Adam Brutting’s illness. “They rotate well and get into the passing lanes. It does make it difficult to get into offensive sets. The kids competed. We weren’t a no-show. We just didn’t adjust. They hit us early and we never recovered.”

Thomaston ripped off the first 11 points of the third quarter to up the lead to 42-7 leaving the only question to the final margin. Barker, playing one of her best games of the season, tossed in 15 points with Mozelak added 12.

With the second half ready to roll, we get to do it all again. But whoever is left standing a month from now it is clear they will have to go through the Bears.