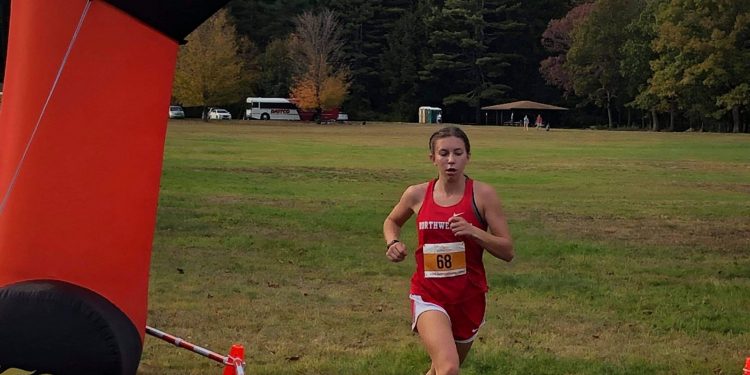 THOMASTON– On the wall at one end of the Northwestern Regional gymnasium an impressive testament to athletic excellence proudly presents itself Bannered by a bold Berkshire League Championships heading sit 16 record boards  that document every Highlander title. You can’t miss it. You shouldn’t miss it.

You want golf, it’s there. How about swimming? Try 13 times. Basketball and boys track have ruled the BL 11 times each. The list goes on. Sixteen different sports 100 titles. Now that’s actually what you see on the boards. The real number is actually 105 titles, softball, boys track and baseball from last school year and boys and girls cross country crowns won Thursday (Oct. 21) not having caught up with the record boards yet.

But before the Highlanders’ fleet feet added two more titles Thursday, there was a sense of something missing from the wall of champions and the Highlanders’ girls cross country knew it. Their program wasn’t there. No mistake. It was simple, no title, no record board. Hard to believe because of the Northwestern pedigree. But not hard to believe considering the pedigree of a league that has been a state power throughout the years with dominant teams like Litchfield, Thomaston and Nonnewaug and runners the caliber of Nonnewaug’s Jackie Nicholas, Litchfield’s Kara Kerr, Thomaston’s Maegan Desmaris and Sabrina Olsen and the Highlanders own Annemarie Tuxbury.

So it was time to do something about it and this time around coach Allison Beauchene’s squad knew it had the feet to do it.

“The whole experience is incredible,” said team captain senior Lydia Beers. “We (the team) went into the gym a couple of days ago and it was like where is our sport. Where is our spot going to be. We were the only program without a spot.”

Rest easy girls, Athletic Director Fred Williams says not a problem You are most likely going to become permanent neighbors to the girls track team. You are in the club and earned your spot. Nothing is missing anymore.

What did it take to finally get on the board. Some pack depth and a few years. Freshman Katherine Beauchene came through with an impressive second place finish on the 3.1-mile course at Black Rock State Park. She was followed by teammates Carly Budge (7th), Madelyn Topa (8th), Madeline Adams (13th) and Lauren Cravenzola (14th), places according to scoring status. All resulting in a 43-58 win over second place Shepaug.

“These girls have worked so hard the last couple of years, not just from the beginning of this season,” said coach Beauchene. “And it was hard to get good. We finished third in the BL scrimmage. Our teams don’t do a lot of summer running so we had to progress. “I’m so proud of them.”

It didn’t hurt to have a determined freshman who gets a lot of push and inspiration from the blood lines. Brother Alex Beauchene a champion swimmer and last year’s BL boys champion and mom-coach are never far away.

“Mom has been pushing me for a long time and my brother has inspired me to live up to what he’s been doing. I live as a swimmer and a runner, “ said Katherine Beauchene.

If the Highlanders’ girls team made it their day, they were glad to share it with the boys team. It wasn’t the first for the boys. In fact this was the second in a row,fifth in six years and No. 6 on the record board. Call them old hands at the title thing.

“We felt this pressure this year, last year we had so many stellar runners,” said Murphy. “It’s incredible to be even with them (as champions),”

It was a mighty happy Highlander contingent late in the afternoon. A lot of pictures, a lot of tears, multiple smiles and a euphoric sense of pride dominating a warm, late October afternoon. The boys stayed on top of the BL and added another title to the board while the girls team finally completed the record board and created their spot.

It was all a little bit of Highlander heaven. Or maybe a lot. It was their day.