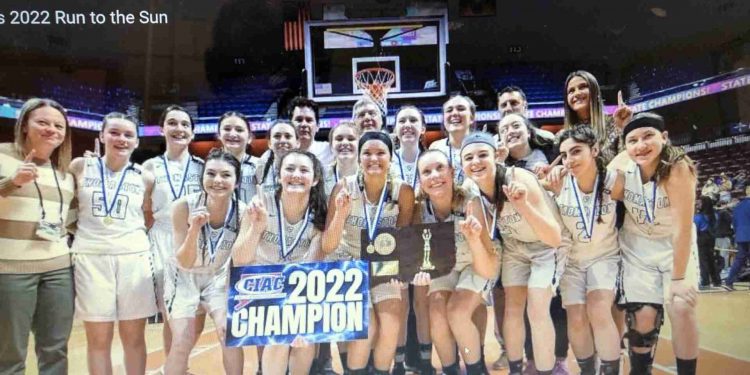 Bobby Mac – A career on the mountain top

THOMASTON – You knew it was coming and it was going to be sooner than later. You just didn’t know when. You were hoping maybe one last basket, one last title, one last season could be squeezed out of a tenure of brilliance.

You wanted one more time. Don’t we always? When things are as good as the Thomaston High girls basketball program has been for the last 15 years, you want time to stand still, time in a bottle. It never works that way as Bob McMahon reminded us this past week.

McMahon called it a day, announcing his resignation as the Golden Bears’ coach after 19 seasons of unbelievable. It was not really a surprise. There was quiet small town talk this past season that this was going to be it. And if it wasn’t, there was only more year in the game plan.

The reason was understandable – family. The 51-year-old McMahon wants to spend more time with his children and watch them play ball. Mike plays for Bristol Central and will be a junior this coming year. Sean is entering his freshman year at St. Paul and Molly will be a freshman at Bristol Central. McMahon left one family, at least physically, for his most important family.

It all makes sense, for so many coaches this time comes when it is time to go home and experience the joy and pride of watching their own kids go after their dreams on the courts and fields after watching so many other young athletes create their own set of experiences.

It is all good. Yet, let’s be honest there is a pang here, a sense of loss. The longevity is responsible for part of that. Almost two decades cements you as THE Coach. There is nobody else. And if McMahon’s predecessor wasn’t Bill Ryan, who is also one of his assistant coaches and former long-time athletic director, most wouldn’t remember another face at the helm.

The tie has always been further tightened because McMahon is pure Thomaston. He is one of their own. Born and bred in the Clocktown, a Thomaston High grad and former player, former head baseball coach, a fifth grade teacher at Thomaston Center School. His biggest fan and former first selectman was his late dad, Gene “Sleeper’ McMahon.  Brown and Gold is part of and always will be part of his DNA. As Hearst Sports Media columnist Jeff Jacobs noted after the Bears Class S state title victory over Coventry in March, “The McMahon family is as Thomaston as Thomaston gets.”

Familiarity by virtue of time and blood is a powerful attraction. Yet, McMahon’s departure is overwhelmed by the creation. What he has done with the Golden Bears isn’t supposed to happen with Class S public schools of 230 or so students, about half of them girls, let alone anywhere.  Cyclical is the norm. You get the star(s) have a couple of good years, maybe really special years if you are lucky, then you fall back.  There is no recruitment. Kids come, they play, they go. Next crop comes in you start over.

McMahon ignored the norm. Dismissed it like a piece of junk mail. And put up numbers that are unfathomable. Three state titles and six state championship game appearances over just the last 10 years. Five straight at one point. Who does that? Thomaston does. Mohegan Sun has become a second home.  The bus knows the way without the driver.  The dreams of other schools and players became and are the Bears’ reality. Weekends in March at the Sun became almost an expectation.

The Bears also might have been there in 2020 when Covid called off the season with the quarterfinals due up and the Bears set to do battle with Putnam. Then again in 2021 when the season was reduced to just Berkshire League games and the Bears went undefeated.

Think about those numbers for a minute. The Bears didn’t go on a run, they bypassed that and built a dynasty.  So many high school players would love to win just one league title. They hunger for a moment in the sun at the Sun. They wonder what it is like to play on the last possible day of the season in the big arena, take a town along for the ride and make a lifetime memory.

In the last 10 seasons no team, boys or girls has made more appearances in the state finals than Thomaston. Stop, pause, reflect and appreciate the magnitude of it all that belongs to the program that resides on Branch Road in the small town nestled between Torrington and Waterbury.

The seasons ended at Mohegan including just four months ago with another state title. The numbers don’t. During McMahon’s tenure there have been nine BL titles and eight BL Tournament titles and career record of 307-121 (.717). After two losing seasons to start his career, the Bears have gone 285-79. Throw in eight 20-win seasons and several appearances in the state-wide top-10 girls basketball poll.

Yeah, that’s not supposed to happen. The unlikeliness of it all has you struggling to wrap you head around it.

McMahon with help of a bevy of stars and quality assistants built a basketball behemoth known state-wide. Four-time Connecticut Sportswriter of the Year Mike DiMauro of the New London Day once told me he wanted to know what McMahon’s magic was. He also knew that McMahon had posted a 143-73 mark as the Bears baseball coach with a state title in 2008, two state title appearances and a pair of BL titles in 10 seasons.  McMahon posted a career 450-194 record in baseball and basketball (70 percent).

Around the state they talk about this program because girls want to play for this program and made them want to take notice.  McMahon always wanted his kids to have fun. But he ingrained in them that a lot that fun comes from winning titles and a lot of enjoyment comes from parades, photo shoots, headlines, banquets, ring nights and the relentless love of a town that has swelled with immeasurable pride.

“We always knew that coach would fight for us and that is why we fought for him every single game,” 2010 grad and the BL’s best player at the time Sciarra Brandt told me after McMahon won his 300th game.

Brandt has been gone 12 years but her thoughts have been relevant for the duration.  They play for this guy and he fights for them.

McMahon, 51, built his feeder program through the Thomaston Trotters, molded many of his players in his fifth grade classroom and produced a toughness on the court that resounds around the BL. “The Thomaston kids are so tough, I wish my kids were as tough,” one coach told me during this past season.”

Former players come back to practice which pleases McMahon beyond belief. Once a Bear always a Bear. McMahon reached out to other BL players to help prepare for the state finals this season with Northwestern Regional’s Maddie Topa and Housatonic’s Sydney Segalla, both looking strange yet comfortable on the Golden Bears’ floor.

It all has been two decades of special and let’s be reminded it is still going. The Bears will take the floor in a little more than four months as the defending Class S state champions and two-time defending Berkshire League champions. Three starters return. The cupboard is hardly bare.

But you get the idea that a major piece of the magic to date is gone.  It’s okay that have that pang, to be a little wistful. The future can never be predicted. But the last two decades are in the book. McMahon brought Thomaston to heights unimagined.  It’s been that good.

McMahon leaves a legacy of brilliance and now moves on to basketball nights where Mike, Molly and Sean get his time and love. It’s been quite a ride that has touched a town. Some get to touch the top of the mountain. Few get to stay there. Bob McMahon and his Bears built a home there.

It’s okay to have that pang, to feel the loss. Two decades of special. At times you couldn’t believe it, you could have never predicted it. But you knew you always loved it. Now change has arrived. It hits you. Lean back, relax and savor it. An era of excellence.