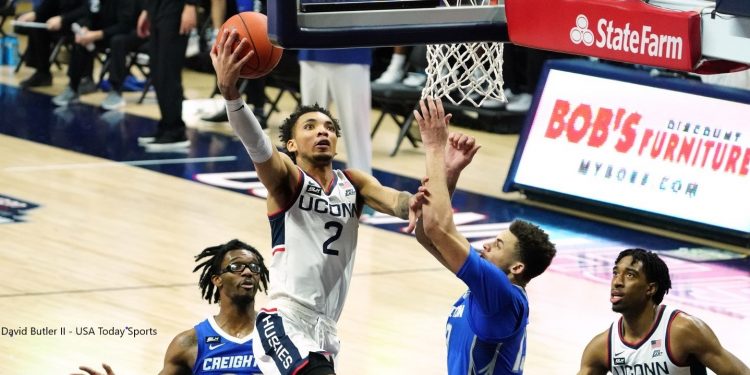 STORRS – It took 2,834 days to happen with some last-minute delays mixed in, but UConn’s long-anticipated return to the Big East finally took place at Gampel Pavilion.

Was it perfect? Hardly. No fans were in attendance, the coronavirus still was lurking (UConn’s Tyler Polley missed the game as he is wrapping up protocol), and, on the court, the Huskies missed a big opportunity.

Big picture wise, though, the UConn fanbase has no reason not to be ecstatic. Despite losing to No. 9 Creighton, 76-74, in overtime, UConn has to love the position its in. Instead of sleepy conference games against the likes of East Carolina and Tulane, the Huskies were at the forefront of college basketball on Sunday, playing on national television and nearly pulled off their first win against a Top 10 team since they beat Florida in the 2014 Final Four.

James Bouknight thrilled the nationwide audience and social media world, scoring a career-high 40 points, often in spectacular fashion, on his way to the most points ever by a Husky in Gampel Pavilion. It was also bittersweet from the standpoint that this game, and notably Bouknight’s performance, deserved a crowd. Back on March 5th, the Huskies wrapped up their 2019-20 season with a thrilling win over Houston before a wild, amped up gathering. You have to imagine this game would’ve supplied an even crazier scene in the building.

UConn, after a 17-day layoff due to covid-induced delays, now stands at 3-1 with its next game scheduled against DePaul at home in 10 days. During that break, coach Dan Hurley will certainly be spending time trying to figure out how to get Bouknight more help on the offensive end.

The Huskies only had one other scorer in double figures in R.J. Cole, who had 12 points, but shot 2-of-13 from the field, and missed two free throws with 11 seconds left in regulation that could’ve sealed the win for UConn. Those numbers aside, Cole did force Creighton point guard Marcus Zegarowski into 4-of-14 shooting, which helped keep the Huskies in the game. The trio of Tyrese Martin, Brendan Adams, and Jalen Gaffney also ran into issues offensively, combining to shoot 3-of-19.

“We didn’t get enough secondary scoring,” Hurley said. “We couldn’t find scoring anywhere else. We pretty much left (Bouknight) out there all alone.”

Bouknight scored in every way possible, converting four three-point plays on lay-ups. He also hit five three-pointers and made 13-of-24 shots. Down 12 in the first half, he furiously led the Huskies back, scoring 23 of UConn’s next 27 points to regain the lead early in the second. Continuously, he drove to the basket and got knocked around, but still found creative and spectacular ways to finish. Not just that he scored 40 points, but how he did, shows why he may be on the NBA Lottery radar.

“Coach has been telling me since the CCSU game to play a full 40 minutes,” said Bouknight, who finished a plus-40 in 40:35 of playing time. “I just kept going. When I missed a shot, I didn’t hesitate to shoot the next one. I just kept playing and stayed focused.”

Bouknight drew 11 fouls and is now averaging 24 points per contest through four games.

“It was a big step for his confidence and a big step in terms of giving a full game attacking,” Hurley said. “He needs to shoot. Obviously, teams are going to take the film of this and really gimmick and do things. We are going to have to find creative ways to continue to get him the ball in key spots. I don’t know if we’re going to get 40 from him all the time, but he is the type of guy that has a lot of days like this (ahead). We have to get him 20 shots a game. And we’ve got to find a secondary scorer.”

After Cole missed those late free throws, UConn had a chance to secure the win defensively, but Damien Jefferson hit a 10-foot leaner over Gaffney with two-tenths of a second left to force overtime.

“UConn had us there late until they missed those free throws,” said Creighton coach Greg McDermott, whose team was led by Christian Bishop’s 19 points. “You have to get lucky every once in a while and we got lucky.”

In the extra session, Creighton outlasted a tired and worn-down Huskies squad. The final was a little closer than it seemed as Bouknight hit two three-pointers in the final 11 seconds with the game no longer in doubt.

“Not playing a game for 17 days, that’s tough for any team,” Bouknight said. “To play with the toughness we did, I was proud of our performance today. We just have to knock down more shots.”

“Those guys and Villanova are the class of the conference,” noted Hurley. “We had them in regulation after not playing in 17 days. We have a chance to have a really, really good team. We just need to get some consistent practices, get on a consistent game schedule, and be ready to play a season without stopping and starting.

“It was a devastating loss, but we showed a lot of character and a lot of toughness with the way that we dragged ourselves back into that game. We should’ve won at the end of regulation.”

The Huskies were back where they belonged on Sunday. And they proved they belong. Despite the final numbers on the scoreboard, it was worth the wait.