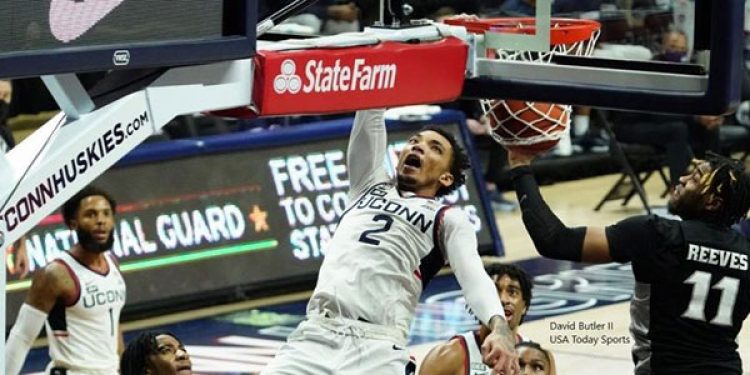 STORRS – If you were wondering how many minutes it would take for James Bouknight to shake off any rust after missing five weeks and eight games, he had an immediate answer for you Tuesday night: zero.

Coming off the bench against Providence in his return, Bouknight, recovered from left elbow surgery, quickly showed he was ready, throwing down a one-handed putback dunk that you will be seeing for years to come on Husky highlight films. He added an alley-oop pass to Tyrese Martin, two old school three-point plays, plus a reverse lay-up. That was just in the first half.

In all, he finished with 18 points, four rebounds and two steals. Most importantly, he led UConn to a 73-61 win over the Friars at Gampel Pavilion, a much-needed victory as they push toward an NCAA Tournament berth.

As usual, Bouknight was not only the star for his team, but he put on a show as well, with that aforementioned dunk creating a stir on social media, much like his 40-point game against Creighton did earlier in the season. He is pushing the “sky is the limit” cliché to another level.

“James is a baller,” UConn coach Dan Hurley said. “He’s handled everything really beautifully since he established himself last year with how he played late in the year, and how that did not affect him as a person, and how he interacted with his teammates and coaches. He’s obviously going to lead this team as far as he can take it through the rest of the year and then he’s going to be the next guy who goes into the NBA to continue that tradition.

“It sucks that college basketball and our fans had to miss him for the (41) days he was out. I’m just happy that, knock on wood, he’ll be healthy to finish the season. The UConn fans here deserve to see him end his career and he deserves to get to wear this uniform because he’s really elevated us at a time when this program was in brutal shape three years ago to what he’s been able to do for us the last two years. We owe him a lot.”

The time away, understandably, felt like it took forever for Bouknight, but, clearly, he’s ready for an end of season charge.

The only cause for concern was when he banged knees with a Providence player late in the second half. He did not return, although he could have if the game was closer.

In addition to Bouknight, Tyrese Martin and R.J. Cole continued their hot play, scoring 18 and 13 points, respectively. Josh Carlton put in a lively 10 minutes off the bench with seven points and seven rebounds.

It’s been a long time since the Huskies (10-5, 6-5 in the Big East) were at full strength and they showed their potential, especially defensively, where they held Providence’s starting guards, David Duke and Alyn Breed, to 8-of-27 shooting. With five games left in the regular season, plus the Big East Tournament on the horizon, they are in decent shape to make a run to the NCAA Tournament, a place the program has not been to in five years.

“When you’re at the point, in Year 3, coming from where we’ve come from a couple of years ago and you lose somebody of James’ caliber, and you lose a talent of Andre (Jackson’s) caliber, it gets a little ugly out there,” Hurley said. “This group did a really good job of holding on and winning enough so our season did not blow up and now we’re almost fully loaded here with five games to go and to see what we could do.”

If the Huskies are to, first, make the NCAA Tournament, and then make a run in it, the obvious statement of the day is they need Bouknight, and the whole team, at full strength. This game was a good indication of what may be ahead.