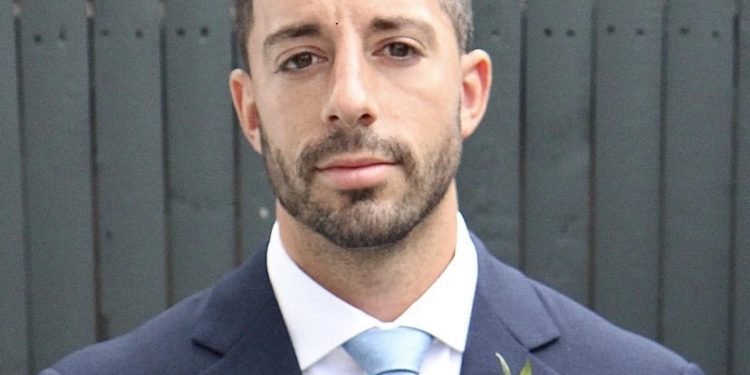 Brett Longobucco. Making a difference in the Big Apple

“It goes back all the way to my playing days,” said the 29-year-old who now lives in Cortland Manor, New York. “The push to challenge yourself to step out of your comfort zone with the intent to improve and take steps towards a goal has always been a very humbling and rewarding experience.”

Being able to launch a professional career in the field has only magnified these feelings for Longobucco. “It is amazing to have the privilege to help some of the brightest minds of tomorrow, learn more about themselves and their holistic wellness, and help them succeed and become stronger during a four-year period that is arguable the most enjoyable and unique time of their lives.”

His love and commitment to learning and then implementing the grand and fine points of sports training has paid off handsomely. He was recently hired as New York University’s Head Strength and Conditioning Coach. He joins the NYU staff after serving as the Director of Strength and Conditioning at the University of Mary Washington in Fredericksburg, Virginia, where he was responsible for all facets of the program for the Eagles’ 23 varsity sports teams.

“I am honored and extremely excited to join NYU’s prestigious athletic department,” Longobucco said of his hiring. “NYU is an elite university that places a strong emphasis on providing student athletes with the most valuable experience possible, giving them the tools and resources to help them grow academically, physically and personally, and allowing them to go on to become some of the brightest minds of the next generation.”

Longobucco also directed the Strength and Conditioning programs for various youth soccer clubs and was the Head Men’s U18 Soccer Coach for the Summit Futbol Club in Rutland, Vermont from 2017 to 2018.

A 2014 graduate of Endicott College with a Bachelor of Science degree in Exercise Science, Longobucco was a four-year soccer team member for the Gulls. He also earned a Master’s in Exercise Physiology-Strength and Conditioning, Fitness Entrepreneurship from the University of Miami in 2016.

“Brett’s mix of experience at both the Division I and III levels has perfectly positioned him for a successful career at NYU,” said Nikki Webb, Assistant Athletic Director for Student-Athlete Health and Wellbeing. “Throughout the interview process, it was clear that Brett has a firm understanding of what it takes to compete in the UAA and on the national stage.

On his upbringing, Longobucco said, “Family is the most important thing to me,” said Longobucco, who graduated Torrington High School in    2010. “My mother and my dad have been great role models for me growing up, as well as my sister and her husband Andrew and their little one-year-old Liam. They are the support system that is my rock no matter what life puts me through or throws my way. And I feel truly fortunate to have that structure in my life and to be able to be even closer to them logistically now that I am in New York.”

Longobucco played “pretty much every sport growing up to some capacity”. He began focusing on soccer around age 13 with hopes to play at the next level. “I was fortunate enough to be on a great THS team, which will always hold some of my fondest memories.” He was able to have a solid career at Endicott College, captaining the men’s soccer team his senior season and then playing a season of professional developmental league at Seacoast United of New Hampshire. “Now, I just try to play as much as I can. It’s easy always being around sports because someone in the department always knows where pick up or leagues can be found.”

Longobucco’s fondest memories of his years in Torrington playing sports are the people he met who are still his close friends. “All of my years playing THS soccer are so special to me and memories I will cherish forever. In particularly my senior year, where nearly our entire team was made up of the same individuals that played U10 soccer together. What makes Torrington special to me is the people in the town. Regardless if they are there now or not. They truly are family and friends who have been there with me since day one and have helped me grow far more than they realize.”

Torrington will always be in his soul but Longobucco revels being in New York City. “I love it, always have since the first time my parents took me here way back in the day. I think the energy is different here than anywhere else in the world. It is a place that will force you out of your comfort zone in every way imaginable and force you to grow. Plus, there is always something to do or an adventure to be had.”

Longobucco said the most enjoyable aspect of his career is getting to work with “so many amazing people”, and developing connections and friendships. “From coaches, to administration, athletic trainers and student-athletes, I genuinely try to connect and learn from every person that crosses my path. Combine that with the growth you witness in these kids in all facets of their lives over four years. I feel this is a really valuable platform to instill in them some lifelong habits and takeaways they can carry with them long after their athletic career concludes.”

One of Longobucco’s immediate challenges is navigating the logistics at NYU. “The academic and athletic practice facilities are located all over the city, which puts a bit of a strain in terms of time crunch in the student-athlete’s schedules. NYU is a very demanding academic school as well, so the stressors that are placed on students from that standpoint need to be accounted for in my realm. On top of that, just getting to learn a whole new department with both my co-workers and 700-plus student-athletes is always going to be a challenge.”

In his years observing and educating himself in the sports training field, Longobucco has seen positive changes. “More and more schools are beginning to recognize the importance in keeping their student-athletes both physically and mentally healthy. More schools are opening programs for education, such as exercise science departments. I think the field of sports performance and sports science is still in its infancy stages, although it has been around for quite some time, I do feel it is going to continue to grow in a positive trajectory, even more so as great science and studies come out regarding various topics of human performance, nutrition, recovery, etc. “

Everything Longobucco programs for student athletes or anyone he works with for that matter is scientifically based and backed, with sound reason or purpose for the adaptation he’s booking to achieve. “With athletes in particular, you really have to weigh the risk versus reward because if they tweak or injure themselves in training, then that takes away from what they are doing in their sport and goes against the number one goal of strength and conditioning; which is to minimize risk of injury. The best ability is availability, so it is my job to help them build up strength to be resilient enough to withstand the demands of their seasons.”

Programming, he explained, to ensure proper muscular balance, efficient force output and energy transfer, as well as the ability to absorb and stabilize external stress, all play major factors in keeping athletes healthy over their careers; approaches may differ from sport to sport. But the concepts remain similar, “in that if you get someone really proficient at the fundamentals, they will be in a pretty good place in terms of resiliency.”

Longobucco explained, “There is a time and place for different techniques and modalities in your programming. One of the easiest ways to approach programming is to address the common injuries in that sport, address the previous injuries or issue in the individual you’re working with, and place them under enough load to build proportional muscle balance that will help keep them healthy and also to perform their sport. Things like training age, time of year in their season or off-season, previous injury, as well as spacing and equipment at your disposal will have a large impact on how the program looks at any time during the year.”

Longobucco quipped, “No one cares how much you know until they know how much you care. At a place like NYU, I try to provide the highest quality of service possible; striving to be as `high end’ in my service as I can be. Both in my programming but also in setting up or breaking down the room, the tools and technology used to present programming or data, and most importantly the relationships I build and conversations I have getting to know them as human beings outside of their athletic endeavors and their passions and goals. Once that level of trust is built, it has the ability to really raise the level of your program or department. Without developing that trust and relationship, no one is going to buy into what you are trying to have them do.”

It’s obvious Brett Longobucco has been a great student of his craft and the student-athletes at NYU are being well served by his presence.