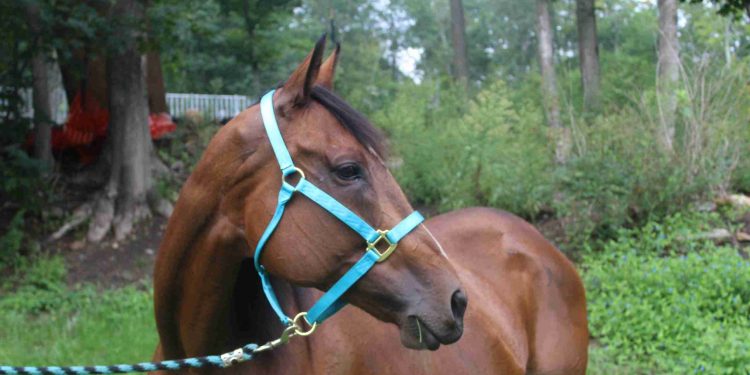 Celebrating “Princess of Pearl” and all the rescues at SBF Rescue

There she stands in her stall at Stoney Brook Farm (SBF) Animal Rescue in Harwinton, looking calm, well cared for and enjoying life after racing.

Jupiter, AKA Princess of Pearl as she was known on the racetrack, has noble lineage. Very noble actually. She is the great granddaughter of the legendary Secretariat, winner of the Triple Crown and considered to be perhaps the greatest racehorse of all time.

Princess of Pearl did all right for herself on the track, running in turf races for a number of years, posting three wins, five seconds and a third while amassing $92,500 in career earnings. But even her link to the greatest horse of all time and productive  career couldn’t save her from what seemed to be her fate; heading for what are known as “kill pens”, places where so many thousands of horses each year go to meet their miserable ends.

“She no longer had use as a racehorse and was going to be gotten rid of,” explained Brianna Crowley, one of the full-time volunteers at the animal rescue facility owned by Rosa Buonomo. “They even removed her identification from her gums when they sent her off.”

But, fortunately for Jupiter, Buonomo was notified of a shipment of horses bound for the pens and intervened, bringing the horse to live at Stoney Brook Farm with some 30 other horses, including several other former racehorses.

Stoney Brook Farm Animal Rescue is a non-profit family-run 26-acre farm off Swimming Hole Road. It rescues animals in need, and provides horse riding lessons, and classes for groups. The farm is funded solely by private donations and relies on volunteers to feed and care for the horses and other animals it takes in, hopefully to eventually find new homes.

“Rosa started this and is the driving force behind the operation,” said Crowley. Offered the farm owner, “It’s a lot of work but very rewarding to know that you have saved animals and brought them back to health. We have had horses come in here that were in very bad shape and worked to save them. But it isn’t easy. It takes a lot of money. We have bills to pay and we go through 150 bales of hay a week.”

Walking around Stoney Brook Farm is something akin to being on Noah’s Ark without the ark. Besides the horses, there are cows, chickens, pigs, peacocks, dogs, rabbits, guinea pigs and other four-legged and two-legged creatures. “The motto is big or small, we save them all,” said Crowley with a smile.

The main show is the horses, many of whom spend their days in a large fenced-in area. They are friendly, these equines, all of them saved from inglorious ends. There are even several wild horses that the rescue farm, which formally began operations in 2016, took in several years ago.

The back story to the wild horses: A pregnant horse and 16 other mustangs were on a truck headed to Mexico to be killed for their meat, but when the horse gave birth on the side of the road the truck was forced to turn around.

Buonomo was notified heard of the truck and stepped in to take the horses, later finding homes for a number of the animals. The horse that was born on the side of the road is named Kody and she has become a mascot and an ambassador or sorts for the farm. Kody’s mother, in such terrible condition that it was a minor miracle she was able to even birth to the foal, did not make it through her ordeal. But on this summer day, her daughter was looking fit and fine as she mingled with other horses and visitors to the farm. Other members of the pack stopped by to visit and several nuzzled against the visitors or bumped into them, as they are wont to do, said Crowley.

Night Hawk Flying, a Native American who also is a fixture at the farm, explained the process by which unwanted horses are “disposed” of in this country.

“Horsemeat is considered a delicacy in some countries such as Japan, the Netherlands and Poland and the meat is used in cat and dog food. The United States stopped the killing of horses for meat some years back, but they are now taken in trailers to Mexico and Canada where it is not illegal to kill them and use their meat. Some of this meat finds its way back into our food chain, which is deplorable and unhealthy.”

Stoney Brook Farm holds fundraisers and programs to educate the public on what’s going on with the mustangs on public land in the U.S. and what the Federal Bureau of Land Management is doing, said Night Hawk Flying. Wild mustangs sometimes end up at auction, he said, then get shipped to the slaughter houses in Canada or Mexico.

When horses in general are viewed to be no longer of any use to some owners, including large farms, they go to “auction”, where a few may be lucky enough to be bought and have a suitable place to live out their days. The less fortunate ones may be purchased by individuals with the sole intent of selling them for their meat.

“The horses that come from the kill pens are mistreated and wind up in terrible condition,” said Night Hawk Flying. “They are packed into large trailers and not fed or given enough water. Some have to travel on the second level of a trailer, which horses cannot handle and many fall and are injured. The trailers are supposed to be inspected in the U.S. to insure that this does not happen but many aren’t.” By Night Hawk Flying’s estimate, tens of thousands of horses find their way to the killing factories in Mexico and Canada each year. There has been some push in recent years to allow the renewed slaughter of horses in the U.S., even at one plant in Plainfield, Connecticut that was closed

And mistreatment of horses isn’t confined to those who hang over railings in the kill pens looking for horses to sell for their meat. Crowley pointed out a horse in the large fenced-in area that was a race horse. “He was difficult in the starting gate and they would hit him in the mouth to stop him from moving, eventually knocking out several of his teeth.”

Then there is Old Man Joe that has his own stall and a small outside area where he wanders a bit. “He is basically blind because he has a condition where light has deteriorated his eyes,” explained Night Hawk Flying. “This could have been prevented if his owners spent 50 bucks on coverings to protect his eyes.”

The sad stories are too numerous to tell and they are about the lucky horses that made it this farm and similar sanctuaries. Most others aren’t so fortunate.

“These horses and others are part of our country’s heritage,” said Night Hawk Flying. “They gave us transportation, helped us farm the fields, took Native Americans to follow the buffalo hunts, and were our companions. They should be respected and honored not treated in such a horrible manner.”

Buonomo and others who do such valuable work at Stoney Brook Farm hope others will pitch in and help out however they can. “We have a lot of expenses,” said Crowley. “We need hay and other feed, have vet bills to pay and we need to pay ferriers $50 a horse every eight to 10 weeks to shoe the horses. It adds up.”

Crowley, who often takes several of the horses to compete at shows, said the farm is “fortunate to have volunteers and veterinarians, such as Dr. Edmond and Dr. Weber, who have assisted caring for the animals at the farm” for minimal compensation.

But more is needed. Those wishing to volunteer their time or support the farm’s efforts with a monetary contribution or supplies and food may do so by visiting the farm’s page on Facebook or emailing sbfanimalrescue@gmail.com.