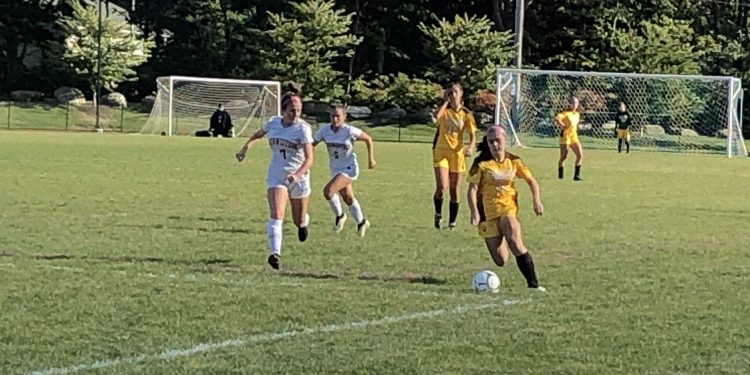 Claire Saunders was at it again Wednesday afternoon. One from the foot, one from the head. One in each half. Two goals in a 2-0 win over Northwestern Regional at Thomaston’s Nystrom’s Park.

An impressive performance. Even more impressive is the bigger picture. This was no one-hit wonder. This is the norm for Thomaston High’s precocious sophomore. Saunders has scored in all six of the  games this season (16 goals) while the Golden Bears have built up a 3-2-1 record.

After a long, difficult growing process, Thomaston made its first state tournament appearance two seasons ago and has moved up the Berkshire League pecking order as a team to be reckoned with. The centerpiece is clearly Saunders.

Jen Ewart is on her second go-around as the Thomaston coach and admits she hasn’t had a more talented player than Saunders.

“She is not only skillful, but she is a technical player too,” said Ewart. “She knows the game. She studies the opponents. She knows where to go and when to go there. She has excellent placement and identifies how to play the ball.”

Long-time former Holy Cross and Sacred Heart girls’ soccer coach Mike Mentone, who assists with the team, has seen more than a few mighty talented players in the Naugatuck Valley League and ranks Saunders right up there.

“She has exceptional ball skills, and her vision of the field is outstanding,” says Mentone. “

Saunders is a year-around soccer player with CFC United in Bethlehem, heavily immersed in the sport. But she is not a one-sport athlete. She makes Thomaston track coach Mark Olsen a very happy guy in the spring where she runs the 100-meter dash and owns the school record.

Equally adept with either foot, she is right-footed but sends lasers at the net with her left foot, and blessed with a wealth of speed, the package is pretty complete.

“With her skills and knowledge of knowing how to beat an opponent along with here speed, she is hard to beat,” said assistant coach Ernie LeClair.

“The speed really, really helps me and I definitely have high expectations for myself,” she said after the Northwestern game. “I am surprised at how many goals I have.”

What Saunders is not surprised at is all the attention she is getting on the field. After a 13-goal freshman season she didn’t enter the campaign unknown but the penchant for putting the ball in the goal this season has changed some defenses. She has steady company wherever she is on the field and actually likes the increased challenge.

“It’s more fun. I’m pushing myself harder and it helps me, she smiled.

Ewart smiled after Saunders’ effort against Northwestern. But if you want a really big grin, mention that she is only a sophomore. That would make any coach smile. This has an opportunity to keep getting better and better.