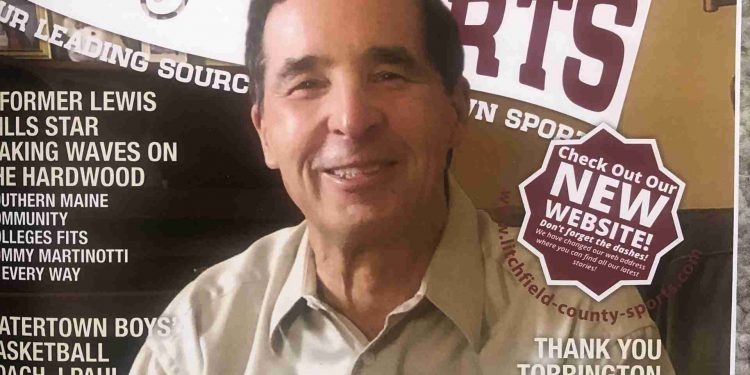 Tony Turina wasn’t looking for a second home when friend John Ponte asked him to take over managerial duties at his Bess Eaton donut shop in Thomaston in January of 1996. He was a Torrington guy through and through. Born and bred with celebrity status nurtured through an athletic career that started as a fine player for the Torrington High Raiders in the 1960s and included a long tour as one of the state’s top basketball officials and a 17-year stint as the Torrington high boys’ basketball coach.

The coaching tenure was highlighted by two trips to the Class L state finals and a much-coveted state championship in 2006, the school’s first crown since 1944. It was Turina who started the Torrington High Athletic Hall of Fame and always made sure the present knew about the past. No, Turina had / has his home in his beloved Torrington. It is his town, and he is part of Torrington’s pride.

But there is nothing wrong with a second home and Turina has found his 10 miles down the highway in the town famed clockmaker Seth Thomas started. What started out as a business move and doughnut drive became a place of deep passion for the youthful, soft-spoke n 71-year-old.

“I fell in love with Thomaston,” says Turina with an appreciation for his good fortune. “I see it as what Torrington was 70 or 80 years ago. It’s a town where people grew up and cared for one another. In 26 years, I don’t see that the town has changed. I always say it is a gem and has like a bubble over it. They do it the right way – the schools, the way the town is run. It’s all one family.”

Turina wasn’t looking for or expecting the developed emotional attachment. He had little connection to the town, the two crossing paths only rarely over time. He remembers driving through Thomaston to get home before there was a Route 8. There were distant relatives, the Catteys who lived in Campville, he met local attorney Kie Westby during their high school hoop days and Westby is a long-time friend and his lawyer. He officiated games in Thomaston. But, his arrival here was a business move, the next step after a long career as a marketing manager that required long hours and trips on the road.

“I was away too much,” explained Turina. “I bought the store from Jon (Ponte) and at that point I made the commitment that this was home as long as I can drive to Thomaston.”

Turina changed the name of his establishment to Tony’s Coffee Express and eventually moved across the street from where the current Cumberland Farms is located on South Main Street to the Black Rock Plaza.

He quickly outpaced the “just another coffee shop” rub. In a town that offers up two Dunkin Donuts, a number of convenience stores and breakfast nooks, there is a popular niche here. There are breakfast sandwiches and pastries but something else –small-town familiarity and ice coffees.

In a throw-back to earlier times there is an element to the soda shop era of the 1950s and 1960s. This is where the kids go, high school and college. At any time, you might find teen-agers from Watertown, Litchfield, Holy Cross, Terryville and of course Thomaston here. It’s a meeting place, a large part of the attraction, one another, and the ice coffees.

“When we had the booths (out now due to Covid-19), you could often see students from different schools in the booths and many know each other and sit together,” said Turina. “One table might be Terryville and one Thomaston. Sometimes we have 20 kids outside talking to one another. They don’t leave right away.”

The popularity of those ice coffees cannot be underestimated. They are made from beans not syrup and the flavors range from snicker doodle and cinnamon hazelnut to Bananas Foster, chocolate peanut butter cup and almond amaretto. The flavor is brewed with Omar Coffee. It is a draw from around the area.

But the success is only partly fueled by the coffees and food. There is Tony himself.

“He always seems to know what goes on in our lives,” says Jon Wilson, a senior at Eastern Connecticut State University who makes Tony’s his first stop every day when he is home. “He’ll take time to talk to you even when he is as really busy.”

It is all part of that family atmosphere that Turina finds with his customers and his customers find with him. He has found more than a business here.

“Not a day goes by that I don’t see people that have been coming here for 10, 15, 20 years,” said Turina. We know what 90 percent of the people drink. We know the Superintendent (of schools), the athletes, firemen and the policemen. You don’t see that in most stores. It’s all an extended family. I could never envision opening a business anywhere else but Thomaston. “

Part of that family is behind the counter. A passel of stars from Thomaston’s storied girls’ athletic teams have worked for Turina. Abby and Gabriel Hurlbert, Sciarra and Brittany Brandt, Morgan Sanson and Alexis Milius are just some of the gang who have served up the goodies.

“I can’t remember a single day when (Tony) wasn’t wearing a smile,” said Sciarra (Brandt) Groski who lives in Florida. “Everybody who came into the coffee shop knew and loved him. Sometimes we would have to pretend he wasn’t in his office otherwise he would talk to customers the entire day and get nothing accomplished.

He wanted his product to be up to standards and if it wasn’t he never hesitated to fix it When the line was out the door, he didn’t wait to jump in. Who doesn’t want to work for a happy boss that helps?

There are other elements in play here that go beyond the sweets, coffees, breakfast sandwiches and comfort bred by cozy familiarity. Turina is a giver, and you would be hard pressed to find a cause that he has not contributed to. Clubs, events, funerals, the needy – all have benefitted by his generosity. He is a guy that has an almost impossible time saying no.

Turina doesn’t’ see competition in his business much of the time. He sees camaraderie. Ask Patti Kelly, owner of Patti’s Place, owner of a gem of a small breakfast and lunch nook and beloved figure in Thomaston.

“Tony is amazing,” Kelly said. “The things he’s done for me. He doesn’t say no. I hold a fundraiser at the Plymouth Congregational Church and all the rolls and pastries are always given. If I had to send anybody for coffee, it would be to Tony’s.”

You might even find Kelly at Tony’s when she needs to get away at times.

There has been a pleasant outgrowth of Turina’s time in Thomaston. For much of his life notoriety has come from his prodigious basketball resume. Now that shares time with the `Tony’s Coffee Shop’ guy.

“There are people here who nothing about my basketball background,” said Turina. “What’s nice is that down here I’m Tony at the Coffee Shop. I was eating in Winsted a while back and a waitress kept staring at me and finally asked me if she knew me. I started telling her that I coached and then she asked me if I did anything in Thomaston. I said I own a coffee shop. She said, “That’s where I know you from, Tony’s Coffee Shop.”

Turina has spoken at Thomaston sports banquets; he has assisted both Thomaston High girls’ and boys’ basketball coaches Bob McMahon and A.J. Bunel at practices. When McMahon’s girls’ teams won back-to-back state titles in 2014 and 2015, he named ice coffees after them.

He has become part of the fabric of the town.

“Tony has been so successful in Thomaston because he there isn’t a person that doesn’t love him,” added Brandt-Groski. “He is genuine and truly a happy person. Happiness is contagious. And in little T-Town that goes a long way.”

Very few can say they leave home to come home. Tony Turina is one of the very few. A rich life that includes two homes.