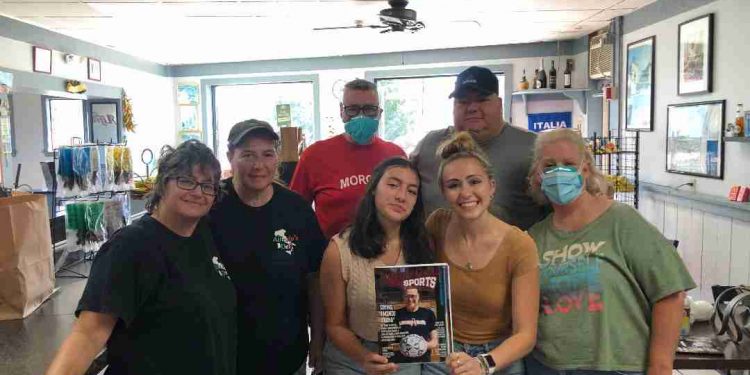 Wolcott Tech soccer coach Vincenzo Viscariello’s world was turned upside down when he got the bad news that was more difficult to ponder than figuring out how to beat an opponent his soccer team would face. He was told by doctors that tests showed he had stage 4 colon and liver cancer.

“Things are better now,” Viscariello said optimistically. “I have been reacting to the chemotherapy really well.” In late September he will have the right side of his liver and gallbladder removed, and after he recovers from that surgery doctors will be able to “take care of the colon cancer.”  He said, “I’m looking at December before I’m 90 percent or more better.”

After having some digestive issues, Viscariello sought advice from doctors earlier this year. Tests in April showed cancer. “It was a shock but I have been staying positive the whole way,” he said.

One endeavor he will miss while he fights cancer is being with his team this fall. It was a difficult decision to make to step away from coaching, but it was the prudent course to take in light of his condition, surgery and recovery.

“It took me a bit to make the decision as Ray Tanquay (athletic director) and OWTS have been great to me so I couldn’t go without giving them the news. But it was a very hard decision I had to make for sure.”

Tanquay agreed that it was indeed a tough decision for all concerned, but stepping away was the wise thing for Viscariello to do.

“Vinny is an awesome person and coach. He truly cares about the players, the team, and our school community. Our school and team will miss Vinnie greatly, but we are looking forward to his return next year. We are grateful that Norman LaMere, our PHC Teacher, was able to step in and comes to us with soccer and coaching experience.”

Tanquay said the decision to take a season off never comes lightly, but when it comes to health and family, those two items are always the number one priority at Wolcott Tech. “Vinnie will have time to heal and recover while the team is being directed by LaMere.”

Besides coaching, Viscariello, who lives in Torrington with his wife Deborah, helps out with Tech’s Class Act Program by volunteering with the Christmas Village Parade as well as open houses and school fundraisers. “Our thoughts go out to Vinny and his family for a speedy recovery and return to the soccer field where he is at home,” said Tanquay.

Getting back to coaching serves as an inspiration to Viscariello, who is 57 years old, “I’m definitely looking forward to return to coaching. I don’t know what to do with myself. Watching Serie A (Italy’s top soccer league) on TV helps, but there is nothing better than to be on the soccer field.”

Besides from Tanquay, Viscariello has received loads of encouragement from other quarters. “The players and their families have been really supportive, as have OWTS staff and administrators. I also have to give a huge shout out to Tony Turina who every Tuesday texts me to see how I’m doing and also has a `Vincenzo Strong’ sign hanging in his coffee shop. And, of course, my family and friends and coaching friends have been great.”

Viscariello plans to keep tabs on his team while he is on the sidelines. This season would have been the fifth he has coached the Wildcats. Viscariello’s teams made the state tournament three times, reaching the second round of the tourney in his third year as mentor. “Also in my third year we had my first All-State player in Marc Rich,” he observed.

Prior to coaching at Tech, Viscariello was an assistant head coach at Housatonic Valley Regional High School in Falls Village, and was a JV soccer coach at OWTS under the late Italo D’Franzo.

He started coaching at the age of 16 for the Torrington Youth Soccer program under the late Gennaro Zaffina. He started playing the game he loves so much when he was five years old, playing on travel teams as he progressed under the direction of former Torrington High School stars Kenny Pearson and Muddy Park. “I played two years at THS for Mike Fritch, Sr. but didn’t play my last two years as I was focusing on my schoolwork,” he explained.

His message to his players as a coach is to give every game 110 percent. “I expect my players to show discipline and leadership on and off the pitch.” As for a favorite team at Tech, he referenced his 2018 squad that started the season 7-2. “This is a hard one but it has to be the team we brought to the second round of states in 2018. Those players were on point and worked with each other very well. They also picked each other up after a missed shot, bad play, or a loss.”

As for his overriding philosophy, Viscariello said, “I love coaching and teaching players who are committed to playing better and then reaching a higher level.”

When asked what he was going to do as he recovers from his condition, Viscariello said quickly that he would follow his Tech team as much as he can. “I don’t know what to do with myself. Like I said,  watching SerieA on TV helps but there is nothing better than to be on the pitch. I’m hoping that I can make a game this year to support the boys.”

Vinnie Viscariello might be relegated to being a spectator this season but he still is part of the soccer program and the Wolcott Tech family. “It’s a great feeling when present and former players go out of their way to come see you. You know you did something right.”

The Wolcott Tech boys soccer team will certainly have their coach on its mind every time they take the field. Nothing will be better than to win one for “Coach Vinny.”