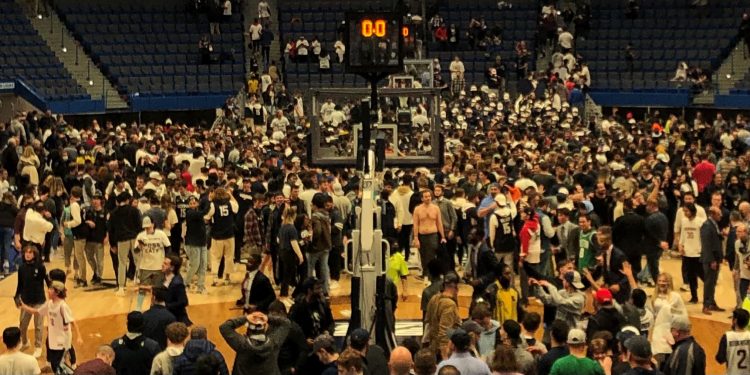 The teams are selected by a vote of the league’s head coaches, who cannot vote for their own players.

Cole and Sanogo led the Huskies to a 22-8 regular-season record, the most regular-season wins since 2013-14, and to a 13-6 BIG EAST mark, the most conference wins since 2008-09. The Huskies, the No. 3 seed at next week’s BIG EAST Tournament, will begin play in the quarterfinals, facing either Seton Hall or Georgetown, on Thursday at 9:30 p.m. at Madison Square Garden (FS1).

Sanogo, one of five finalists for the Kareem Abdul-Jabbar Center of the Year Award, was an inside force for the Huskies. He was second on the team to Cole in scoring (15.3), and led the Huskies in rebounding (8.6), offensive rebounds (3.5), and blocked shots (2.1). He led the team in scoring in 11 games, including 30 against Auburn, the team’s highest scoring game of the season. He topped the Huskies in rebounding in 10 games and had a team-high eight double-doubles.

Among all BIG EAST players, Sanogo led the league in rebounding (9.7) and field goal percentage (.509), was second in offensive rebounds (3.8), fourth in blocked shots (2.2) and seventh in scoring (15.1). He was named the BIG EAST Player of the Week twice and was on the Weekly Honor Roll three times.

Hawkins appeared in 27 games for UConn, starting four, and averaged 5.8 points and 2.0 rebounds. His 27 three-pointers ranked fourth on the team and his .821 free throw percentage ranked third.

Cole and Sanogo are UConn’s 23rd and 24th All-BIG EAST First Team selections since the league began in 1979-80. The Huskies also had four First Team picks while in the American Athletic Conference (2013-2020). Hawkins is UConn’s 29th BIG EAST All-Freshman Team selection (including Sanogo last year), and the Huskies had four All-Freshman Team picks while a member of the AAC.

The individual BIG EAST awards will be announced in the coming days.