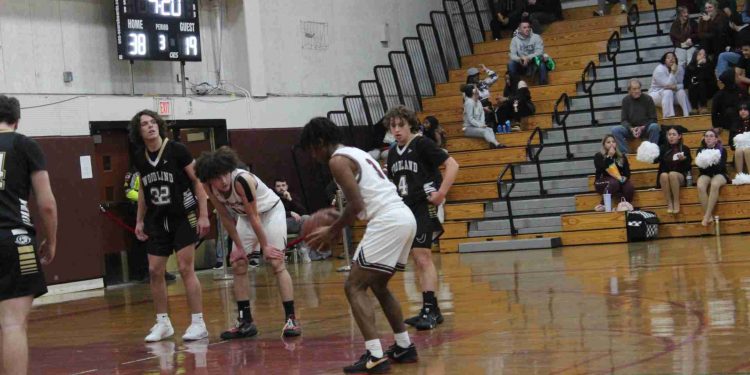 Depth a strength for THS boys’ basketball this season.

TORRINGTON: There is an awful lot to like about how the Torrington boys’ basketball team is playing right now.

Fresh off a dominant 62-32 win over visiting Woodland, the Raiders now sport a 3-4 record as they find their identity which revolves around a balanced and deep team that on Tuesday night, went 10 deep.

Start with the upperclassmen, seniors Jordan Harvey and Thaddeus Kimberely who led the way a year ago when the team posted a better than expected 9-11 mark and a state tournament berth.

Torrington, ranked No 22, traveled across the state to take on No 11 New London and battled hard in an eventual 45-41 loss.

This season, all four bring something unique to the hardwood.

Harvey is the floor general and along with Kimberley, the most vocal in support of each other and their teammates, whether on the court or on the sidelines.

Smith is a fast and dynamic number two guard who can take the point when needed while Duman brings instant energy mixed with composure when he gets on the floor.

DJ Williams, a junior, also ups the energy when he enters the game and on Tuesday against the Hawks, a 17-point second quarter when most of the second team was on the floor grew the lead at the half to 32-17.

This team’s sophomore class though, may be the best kept secret in the Naugatuck Valley League.

William Parkhouse, who all of us who follow some of the goings on in the youth leagues in Torrington, know that this young man is one you want to have on the free throw line at any point in the game.

They trophy case in the Parkhouse dwelling is filled with hardware, reminders of how good this young man is at the line.

Along the way though, he became a dynamic outside shooter and led the way Tuesday with 17 points, including a trio of three pointers.

A lefty, Parkhouse possesses the ability to shoot it from downtown or down low and when he develops his inside game even more, watch out.

Fellow tenth grader Adi Puskarevic gives head coach Eric Gamari a really nice one-two dose of height on the inside, something that will prove vital as the season goes along.

Logan Tucciarone comes off a great season on the pitch for the Raiders boys’ soccer team and is physical and athletic when he’s on the court.

The road ahead starts on Friday when THS travels to take on St Paul, followed by a visit up Route 8 to take on Berkshire League foe Gilbert before coming home on January 20 to battle Derby.

A tough out of conference matchup against Newtown on Saturday, January 21 will be a good test as to where this team stands as they start the second half of their campaign.

Any team that has the kind of upperclassmen and youth that Torrington has brings the potential to be dangerous and will certainly be fun to watch.