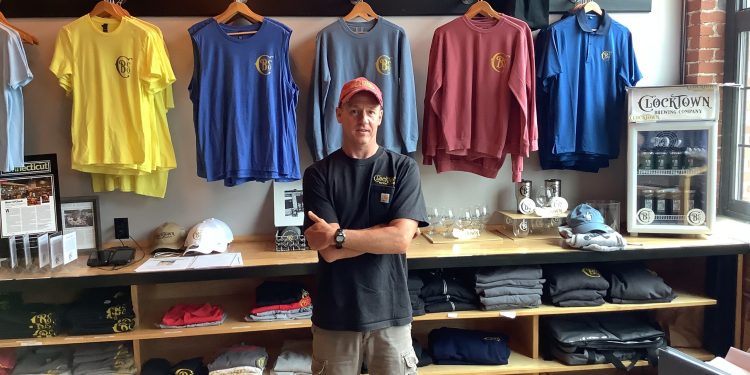 From night to day. From Gampej Pavilion and Rentschler Field to an iconic old clock factory. From writing deadlines to brewing deadlines. From basketball and football to barley and hops.  From happy readers to glowing customers (or customers with a glow).

Meet Ed Daigneault, a youthful 52-year-old in happy transition. For 22-years a top-notch sportswriter for the Waterbury Republican American and since Nov. 6 of 2020 one of two brewers and an owner of Clocktown Brewery in Thomaston.

Actually, this is hardly an introduction of Daigneault. If you are any kind of sports fan, you will recognize the name of a man whose name was attached for more than two decades to the Republican-American’s coverage of UConn men’s basketball and football and an assortment of high school sports. With a clear, crisp and creative style, his copy was respected by peers and readers around the state.

So how do we get from a plum beat that many would covet to the art of brewing? After all, covering four national titles and 11 Final-Fours in basketball, doing the bulk of your business in legendary venues like Madison Square Garden and Syracuse’s Carrier Dome and dealing with legendary coaching figures like Jim Calhoun and Jim Boeheim and players like Kemba Walker and Emeka Okafor would seem like a pretty good gig.

The national titles and all were special, but Daigneault particularly looked fondly on covering the Big East Tournament and the frenetic, pulsating atmosphere of New York City. And if you want a game that sticks out how about UConn’s six-overtime classic with Syracuse in the 2009 Big East Tournament at the Garden. By the way eventually won by Syracuse in case it slipped your mind.

How do you walk away from stuff like that? Not every night is like the Orangemen and the Huskies, but the potential is always there.  How about another dream and some stark reality.

“It was kind of my dream to brew and the opportunity presented itself,” said Daigneault. “Plus, the newspaper industry is kind of dying.”

Let’s throw in that the hours are prime time but not exactly prime. Oh, and money? Can you say Go Fund Me page? So, the opportunity presented itself in the form of friends George and Stacy LaCapra owners of the business and available space in the Thomaston landmark building that housed Seth Thomas Clocks for a century. LaCapra owns UniMetal Surface Finishing right next door to the Brewery.

Daigneault began experimenting with brewing beer a while back and the passion grew.

“I mentioned to my wife 15 years ago or so that I wanted to make beer at home. It was an off-hand remark,” said Daigneault. “That Christmas she bought me a home brewing kit. I brewed my first batch in 2007 and it didn’t kill anybody. But the house smelled terrible, and she told me I can’t do it in the kitchen, so I moved it to the garage. “

Daigneault became a steady brewer except for a one two-year hiatus, making 153 batches five gallons at a time.

The transition from the sports world to the beer world has been easy in general says Daigneault but demanded inevitable adjustments. His workday now starts at 8 a.m. a nice change from the long night hours of a sports reporter, particularly for a self-described morning person. However, he now has to go to work from his Watertown home as opposed to often working from home often where he did much of his writing when not on site for games.

The biggest difference has been the physical transition.

“I’m lifting 55-pound sacks of grain, big hoses that weight 10 to 50 pounds,” explained Daigneault. “I’m pouring gallons of liquid with potent chemicals that if you are not careful will kill you. I’m on my feet 99 percent of the time.”

There is also the time consuming and mind-numbing tax work that has to be done to satisfy the federal and state government.

The sheer volume of the brewing presents its own challenges. It has been a major adjustment to go from brewing 300 gallons from five-gallon batches at home.  You can’t just do proportions incrementally. You constantly have to find consistency.

“You have to have some basic knowledge about how beer is made,” said Daigneault. “Chris (fellow brewer Sheeler) and I write recipes for beers all the time. “

It is a varied menu from fertile minds. You have you Thomaston Lager, a German Pilsner and Clocktown’s largest seller. You want a stout. Try the Watch Tower. If IPA is your game there is Second Hand, Nightmare on Elm and Timepiece. There are more and its’s a pretty menu of palate pleasers.

If there is a connection with his former and present professions it is the creative part.  The story and beer both need to sparkle.

Daigneault’s average day is 6-8 hours with his ales and lagers. You might see him early in the evening although he is not a front and center guy by choice and by job. Brewing is his part of the business.  But the nights now belong to him again. There is no game to go to. No deadlines to meet; only brewing deadlines. Only home awaits.

Any change in profession brings with it some uncertainty and angst especially with family involved. Throw in and extra dose of Covid Pandemic and some early issues with local regulations for a liquor license.  Daigneault and wife Kristin have two daughters, Madeline and Paige.

Fear not. Reception has been phenomenal in the first seven months.

“I spent more time with them than family,” Daigneault said. “But I don’t regret the move one bit.”

Maybe some readers do. But a whole lot of people packing into Clocktown Brewery don’t. They like a good beer.