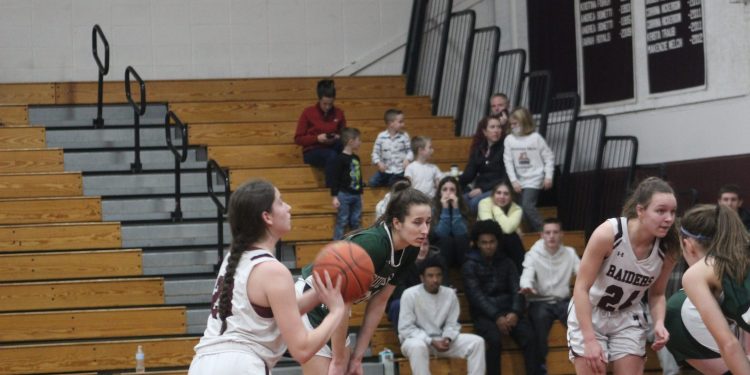 Fine season comes to an end for Raider girls in Class 2nd round game.

TORRINGTON: When the 2021-2022 Torrington girls basketball campaign began in December, nobody knew what to expect.

The Raiders had lost their leading scorer from the year before when Leah Pergola was lost to injury after leading the team in scoring as a sophomore.

What happened over the next two and a half months was a pleasant surprise for all who watched this team re-define themselves on their way to a 14-6 regular season and Class L First Round win earlier this week.

The campaign came to a close on Friday night though as the Guilford Grizzlies came away with a hard fought 42-37 win.

Haley Burger led the Raiders with 16 points and after starting slow, Torrington battled back from down 10 at 20-10 late in the second quarter to take a brief lead in the third at 28-27.

A 6-0 start to the final frame wrapped thing up for the visitors who are rewarded with a game against the top seed in Class L, Newington (20-1) next Tuesday.

It was a long season in many ways for Mike Fritch and his Raiders who battled major Covid disruptions over the first month that caused the team to be sidelined from December 23 to January 11.

Once they got back on the Harwood though, they started to jell behind the play of senior Marissa Burger and her sophomore sister, Haley who each took turns being the squads leading scorers.

Torrington ran off seven straight wins after returning to the court in the second week of January.

Even though it was a loss, the Raiders best effort of the season came against the top team in the Naugatuck Valley League and one of the top teams in the state, Holy Cross.

On February 16, the still unbeaten Crusaders came to the Connie Donahue Gymnasium and barely escaped in a 63-61 battle that went right down to the wire.

Many times during that game, the Raiders appeared knocked out but each time Cross built the lead up, Torrington battled back.

While much was gained from that game, it seemed to take a toll on the team down the stretch as tired legs and arms effected their shooting touch.

A lack of depth didn’t help either as the Raiders most games only went with six players.

All except for the talented senior point guard, Marissa Burger, return along with a healthy Pergola.

Haley Burger, Amelia Boulli, Rachel Brewer-Karimi and Brianna Murelli will be back along with Julianna Latina who was key off the bench for Fritch.