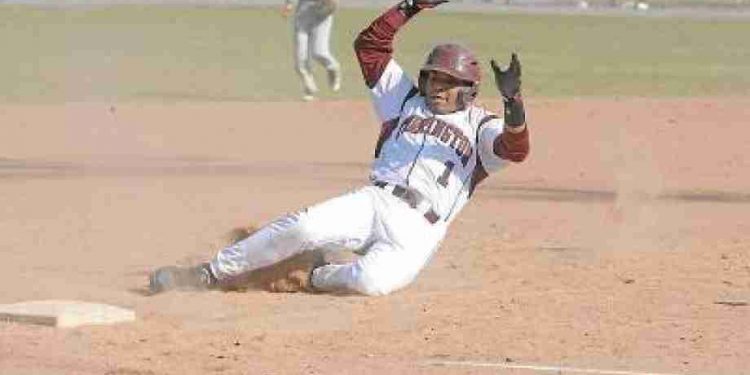 TORRINGTON: I guess the only way you could describe it is scary. Really scary.

The Torrington High School baseball team is pounding out runs like they grow on that preverbal tree. Like they don’t want to stop until their opposition cries uncle or develops a mercy rule.

Their latest victim, the Seymour Wildcats, came into Fuessenich Park with a 1-3 mark, left at 1-4, and will be happy not to see the big ballpark for another year.

Running down balls in the gap or looking over the fence for a lost ball off a Raider bat is something the first three visitors to enter the “Jewell of Litchfield County” have gotten far too familiar with.

21 hits and 19 runs on Wednesday, five of the hits and eight RBI’s off the bat of just one player, sophomore Dom Sabia.

Every starter had a t least one hit, four had multiple hit games, two with multiple RBI days.

Their 19-5 final held a boat load of good things in it. Did I just state the obvious?

But yes, after beating Holy Cross on Monday by a 12-8 final, the home standing Raiders did fix a problem.

Let’s go to where the problem started for the Wildcats on “Hump Day” first though.

Seymour actually held a 2-1 lead entering the bottom of the third before the wheels not only fell off the bus, nobody could find the remainder of the bus as well.

Nate Manchester (4-5, 4 runs, 4 RBI’s) started things off with the first of four consecutive doubles. Seemed the Raiders preferred starting at second this day, they banged out a total of eight on the day.

Two-baggers by Jason Vinisko, Sabia and Ben Bonvicini got the ball rolling, the ball was the size of a small mountain by the time it stopped rolling, nine runs later.

Manchester would score twice in the frame and drive in three with a bases loaded triple in his second time around the merry-go-round.

After blasting their way to a now 10-2 lead after three, Torrington gave three right back to the Wildcats and the lead was within reach at 10-5.

On Monday, the Crusaders scored six runs over the last three innings after the home team had what you would have thought was a big lead.

Their head coach gathered the team after the big inning and implored them to not let down and although they did give up the trio of runs in the fourth, the door was shut after that.

“They responded today,” Raider head coach Pat Richardson said, “Defensively especially I think once we had that talk, we had Dom laying out in left field with a defensive play, we had Nate real consistent at short after that play. We had guys step up and do what they had to do for their pitchers.”

It’s a pick your poison for teams that take the diamond against the Raiders at this point. There are no automatic outs.

“They’re not missing many pitches,” Richardson said, “And they’re making it count. They’re making adjustments at the plate and the thing I’m liking and seeing is that they’re hitting to all field too.”

As for Sabia, high expectations came with the sophomore who is devoting all his energy to the diamond and on Wednesday, you saw how it has paid off.

After two doubles and a single got the easy part of the cycle out of the way, Sabia launched a long triple that scored a pair of runs in the fifth and himself scored on an error on a bobbled relay from the left center field fence.

In the sixth with the bases loaded, Sabia completed that unique baseball puzzle with a towering grand slam of the left center field fence.

It’s clear this second year player is something else.

“He really is,” Richardson said, “He works at it. He just doesn’t show up in the spring and say ‘hey, let’s see what happens this year’, he’s working all winter and all fall on his game.”

It’s clear the offense is the story for the Raiders who started 2014 with a 0-3 mark and have quickly gotten themselves off to a fast start.

“They’re thinking the right way,” Richardson said. “They’re coming up big with people on base so I’ve got guys in the lineup that are setting the table for them too. Without those guys, there’s not that many runs up there. Right now, up and down the lineup, we’re really doing things to help ourselves.”

The Raiders head out on the road on Friday and Saturday to take on Kennedy and Derby, respectively before coming home to play Crosby on Monday. None of those teams have posted wins as of yet meaning Torrington could really race out to a great start if they take care of business.