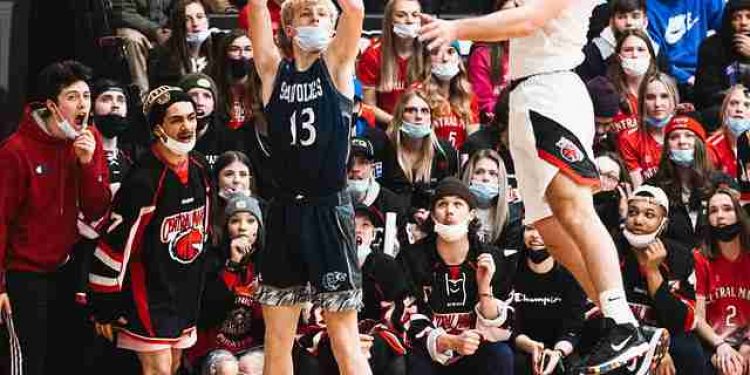 Tommy Martinotti was looking for a fresh start, a place where he could grow as a person, student and athlete. He found it in the Pine Tree State.

Martinotti, a 2020 graduate of Lewis Mills High School, is a member of the men’s basketball team at Southern Maine Community College and enjoying life on the court and the classroom.

“My dad (Robert) actually found SMCC and I took a look at the school online and noticed how nice the campus was,” said the younger Martinotti. “I got in touch with the basketball coach (Matt Richards) and went for a great visit and was able to see the basketball gym, weight room, the dorms I would be staying in and the dining hall which is located right on the water. It has the trade I want to go into for a career, and also a great opportunity to play basketball for a great program. It was a no brainer.”

Being at SMCC has already made Martinotti a better athlete, he believes. “Playing at the college level is so much different than high school. The spacing on offense and defense, certain rotations you have to make on defense, learning a new system and offense, and just going against more speed and better athletes than what you play in high school. Oh, and that classroom thing? “Basketball has pushed me to become a better student. Not being the best high school student, I got a fresh start at SMCC and wanted to have a strong start aiming for all A’s and B’s.”

Martinotti explained his immersion into the basketball scene at SMCC. “The coaches preach having a good culture, and how player-led teams are more successful than coach-led teams and I couldn’t agree more. The basketball team feels like a family. That can sound corny but it’s how it feels here. At times, we go at it in practice but it just makes everyone better.”

Martinotti said that family feeling extends beyond the basketball court. “Off the court, everyone gets along; the locker room is always full of energy before and after practices. You can go to the coaches and talk to them about anything. My head coach (Matt Richards) checks in on me regularly to ask me about my classes and what I think about basketball and school. I couldn’t be happier with the team overall, and coaching staff. They understand the importance of having strong relationships with their players.”

Richards offered some thoughts on his player. “Tommy has been a great addition to our program. He has been a very good student-athlete who has balanced the vigors academically within the HVAC (Heating, Ventilation and Air Conditioning) program and the demands placed on athletes. On the court, he is extremely versatile and that allows us to use him in a variety of ways. I feel that his best playing days in our program are still ahead of him.” SMCC plays in the Yankee Small College Conference.

Said his dad, Rob, “We’re so proud of Tommy and his `go get it’ attitude. He has learned the great life lesson of `keep working hard and the cream will rise to the top’ (one of his grandfather’s sayings to Tommy). The opportunities that he is experiencing now will make him an ever greater man, dad, brother, and son.”

Tommy Martinotti is working towards an Associate’s degree and plans on going into a HVAC career, “a hands-on job that has a shortage of workers, and the pay is great”. He added, “While basketball is fun and keeps me focused, my main reason for being here is for my future career not basketball. My grades through the first semester have been A’s and B’s.”

Martinotti is coming off the bench this season. His favorite game at SMCC thus far “had to be a game against our rival CMCC (Central Maine Community College) where we were down 7 at halftime. In the second half, the starters went on a 16-1 run late in the game giving us the win. While I wasn’t on the court in the second half, we still were making an impact on the game by having a lively bench. This school rivalry has gone back for years and every year when we play them the gym is packed with students.”

At Lewis Mills, Martinotti broke into the starting ineup his junior year. As a senior, he was voted co-captain by his coach and averaged 13 points, nine rebounds and seven assists a game and won the Spartan award for the team’s most valuable player.

In high school, Martinotti recalled, “Playing Bristol Eastern and Bristol Central were always the best games. They were our new rivals in the new conference our high school changed to my junior year called the Central Connecticut Conference. At all games, there would be student sections from both schools making the atmosphere amazing to play in.”

Martinotti has always been interested in sports. “I started watching and playing sports at a young age. Basketball, football, and baseball were all the sports I played as a young kid. My favorite sports teams have always been the New York Jets, New York Yankees, and the Boston Celtics.”Basketball is my first love, it has been my favorite sport since I was 12.”

He remembers being pretty good at the game as a youngster. “I played in Recreation Department games with my dad as the coach. We were always the Celtics or Heat and we would always have the best team. I did think I was good at basketball right away and I think that’s a big reason why I started to love it.”

What has helped Martinotti in the sport, especially in recent years, was shooting up in height quickly, from below six feet to his current 6-3. “There was an adjustment, but it just helped me become a better player. It allowed me to go to the rim easier against taller players and helped me get my shot off as we got older and going against better competition. Growing in height also made me become a better rebounder and defender at the high school and college level.”

To say the Martinottis are a family immersed in athletics would be a decided understatement.

Rob played three sports as a youth and his “most memorable” event was his Junior Pop Warner Football State Championship team coached by Mike Bakunis, and his Babe Ruth team, Local 1645 baseball team that went 17-0 in 1975.

Rob said of his father, Bob Martinotti, now 84, “I couldn’t have asked for a more supportive dad and more importantly a role model for me and my children. He was a three-sport athlete in high school and excelled in all, football. baseball and basketball.”

Said son, “Dad graduated high school in 1956 and had many great memories of playing in the Torrington Armory. All the games seemed to be sold out and at the time the games were broadcasted on Waterbury radio station WATR. He speaks of many double-digit scoring nights, most notable a game-winning jump shot to beat Naugatuck. He went on the play with a semi-pro team call Alfano’s.”

Rob said his faher has always been very supportive of his family’s sports and life endeavors and would never say he didn’t have time to have a catch or to shoot baskets. “Mom and Dad are amazing role models and supporters of all their grand kids and also of my sister Carol Martinotti Finn’s kids; Maggie, Kevin and Connor Finn. He was at every game and talked about work ethic, practice drills, and life lessons. As recently as last summer, Dad would come up to our house and work with our daughter Cassie on basketball drills and shooting drills.”

Tommy Martinotti’s siblings were or are involved heavily in sports. Olivia now 30, played youth basketball and baseball in Torrington Recreation Department programs up to about the 6th grade. At Torringtom Middle School, she got introduced to volleyball and that was the sport she played through high school.

After Olivia middle school graduation, the family moved to Harwinton. Har Bur Middle School did not have a volletball program but having had some middle school experiece from Torrington allowed Libby to stand out as a freshman at Lewis Mills. As a junior she cracked the varsity team and as a senior Libby was selected to the Bershire League All-Second Team. She continues to play competitive volleyball in Los Angeles.

Robert Martinotti (Bobby), now 27), was a three-sport sport athlete through middle school and was also a part of a Torrington Youth Football State title team in 2008. In high school, Bobby played baseball and football. He was a second baseman and he and Jake Wazerko were known as the best double play combo in the Berkshire League. Bobby also played American Legion ball and was selected to the American Legion All-Star team 2011.

As a senior football player in the 2011 season, he was selected as an All-Conference football player. In his first game of the season against Morgan High School he scored a half dozen touchdowns, although two got called back due to penalties. He went on to play football at Western New England University before transfering to Roger Williams College.

Cassie Martinotti, 16, is a junior at Lewis Mills, playing volleyball and basketball. She is the president of her class and is regional representive for the Relay for Life cancer fundraising campaign. Being the youngest of four children she has always had to scrap and fight with the oldest siblings. Like Bobby, things come pretty easily to her in both classroom and on the court. Cassie may have the best jump shot in the family, said her dad.

Tommy Martinotti talked about the relationships he has with his siblings.

“I’ve always been extremely competitive with my siblings. My older brother and I have played basketball in the driveway since a young age and trust me he would never let me win. He taught me little things in basketball; how to be an annoying defender, how to get into the other player’s head. It didn’t matter what we played I always wanted to win, it could be a family card game, or video games on holidays with my cousins.”

Martinotti said his younger sister is the “most stubborn” in the family, “so whenever we would play one-on-one, I made sure to let her know who the big brother is. My oldest sibling, Libby, is considerably older than me so I can barely remember going to her high school volleyball games. When we are all together, no matter what we play or do, it is always competitive.”

All that intra-family competition has no doubt served Tommy Martinotti well in is new life at Southern Maine Community College, both on the basketball court and in the classroom.