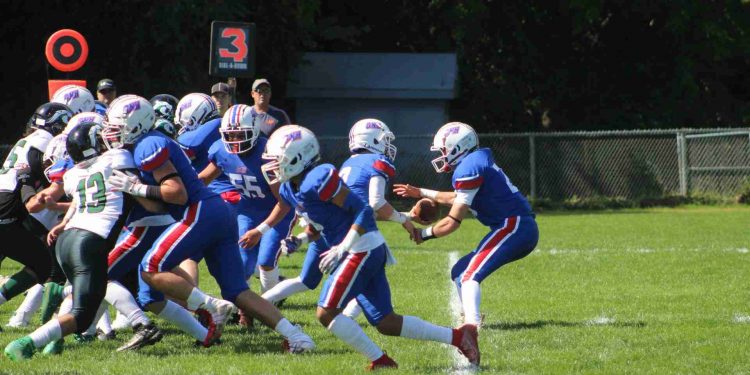 GNH proves itself in NVL football

When Tom Brockett talks football people listen. The winningest record in Connecticut high school football history (185-15), six state titles, a dozen state title game appearances and six undefeated seasons in just 17 seasons at the helm of the legendary Ansonia program kind of give you that sort of credibility.

So when Brockett tells you that Gilbert-Northwestern-Housatonic (GNH) is, “one heck of a football team and, “they will be in the Class SS semis this season, “understand that the Yellowjackets have been acknowledged and accorded a major level of respect just five games into their first year in the Naugatuck Valley League.

Brockett’s remarks to the Waterbury Republican came on the heels of a rugged 30-20 victory over G-N-H at the Chargers Nolan Field Sept.  30. The victory raised no eyebrows. Heck, Ansonia has won 108 of its last 109 NVL games dating back to 2010, only last year’s Thanksgiving Day loss to Naugatuck blemishing a 12-year run that included 103 wins in a row. You never look to see if Ansonia won, you look to see by how many.

So while winning is the norm for Ansonia, GNH forced some focus its way. Brocket said he expected a tough game. My guess is that while Brocket was right, his was probably a minority opinion. There is a still a mental adjustment going on from many quarters – from Pequot League to NVL, from the likes of Granby/ Canton, SMSA (no offense to those programs) to the Ansonia, Naugatuck, Holy Cross and Seymours of the world.  From the Northwest Corner Berkshire League world to the football proud Valley world.

Even the Yellowjackets themselves had to get a feel for their new surroundings.

“We were a little nervous (going into the season),” said GNH’s fleet-footed all-purpose guy senior Fred Camp. “It is a different environment with a different type of speed and bigger kids.”

Understandable. Yet halfway through the season after this week’s 41-7 steamrolling of Oxford, rest assured the Yellowjackets belong in the NVL. The only two losses have been to NVL behemoths Naugatuck (21-6) and Ansonia in highly competitive matchups.

GNH actually had Ansonia in the rarely seen position of trailing early in the fourth quarter when Camp and quarterback Nolan Risedorf hooked up for a 94-yard touchdown pass for a 20-14 lead. Ansonia answered the unheard of on their own home turf with a couple of touchdowns but the GNH point had been made.  It was further emphasized this week.

“We should have had them,” said Camp. “We showed that we could play in that league. Ansonia and Naugatuck are not just regular teams, they are state championship teams.  Athletically and skillwise we are there. We just need more discipline.”

The Yellowjackets have Crosby, Torrington, Derby, WCA and St. Paul left on the schedule, winnable games across the board.  You know the word has gotten around, beware the team that calls the end of Route 8 North its home.

And you know that Camp’s name is front and center when it comes to GNH. The shifty three-sport star with college aspirations had touchdown runs of 19, 3 and 72 yards along with a touchdown pass to torment Oxford. He has been an issue for every opponent to date. Throw Risedorf in there and running back Aiden Avenia and the weapons and experience are there.

If you are still not convinced yet, then listen to Tom Brockett. He is not a smoke-blower and he’s got a pretty good line on this high school football thing.  It didn’t take GNH long to feel comfortable in its new home.