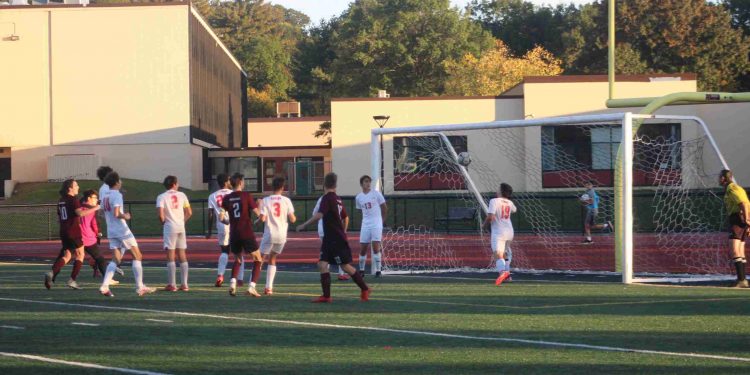 TORRINGTON: After suffering back-to-back tough losses (6-1 to Holy Cross and 7-0 to Woodland), the Torrington boys soccer team was in need of something good happening.

That good happened quickly on Tuesday night when the Raiders hosted the Wolcott Eagle via a goal just 1:30 into the game when junior Chase Gurtowsky got his head on a corner served in by senior Michael Valentine.

It was the first of three goals for the speedy eleventh grader who has the perfect first name because he is terrific at chasing down action all over the field.

His hat trick led the home team to an eventual 5-1 win and a return to their winning ways.

Twelve minutes later, the Raiders would extend their lead when junior Marco D’Addona connected and the confidence the team had shown in their 6-2 start was back.

Also back was a basic of soccer.

Passing the ball to feet as opposed to simply launching balls that had little chance of finding the correct destination.

The Eagles got on the board off a breakaway later in the first half, cutting the lead in half, where it remained until the break.

It’s a common soccer theme that the first ten minutes of any half can make all the difference in the games outcome and the Raiders struck early in the second half with Gurtowsky taking a terrific pass from senior Brayden Nietch.

It’s the determination of the soft-spoken junior that impresses his coach each time out.

Senior goalie Ryan Mercogliano was once again outstanding in goal.

The three second half goals by the home team provided some breathing room that will be short lived with the schedule Torrington is stairing at.

On Thursday, they travel to take on rival Naugatuck (6-2-1) before coming back hoime next Tuesday to take on Watertown (9-1).