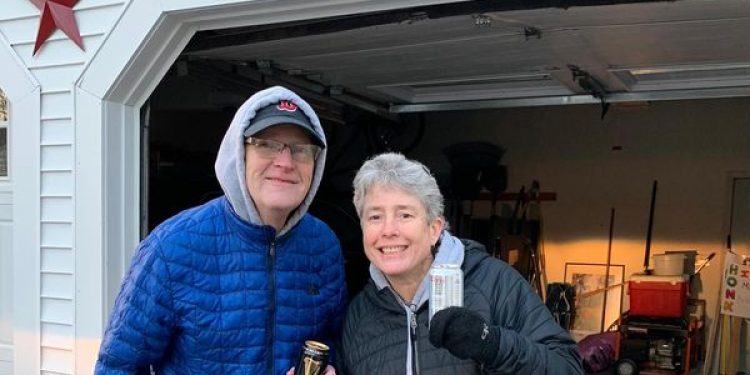 Hey Pablo, you won the race.

Maybe he’s rocking out with Garcia and the Dead. Maybe he’s sipping a cold one with the group Wilco. Or maybe he’s tossing a Frisbee and shooting some baskets in the Thomaston Middle School gym. Maybe he’s relaxing at the shore in Old Saybrook or maybe’s he’s luxuriating with a Guinness anywhere.  Then again, he might be chewing the fat about UConn or the Red Sox around the fire pit or hanging in one of his favorite haunts, Black Rock Tavern.

I don’t know what Paul McMahon is doing or where he is doing it right now. What I do know is that he’s doing it in a better place and he is doing it with his wife Mo. Theirs was a pretty cool love story the kind that reminds of you of the final scene in the movie ghost when Patrick Swayze, about to enter heaven, says to Demi Moore, “It’s amazing, the love inside, you take it with you.” She is here but she is there with him too. Now and always.

Pablo, as almost everyone knew him as, died Tuesday morning at the age of 63 after a long struggle with Alzheimer’s Disease. This is a column you never want to write. Mo lost part of her soul, the kids, Owen, Luke and Jack lost their dad, the family lost a proud, loving friend, friends lost an engaging presence and father, Gene lost one more part of his blood and you wonder how much one man should be forced to endure. There have been seven children, now there are two. Cancer, car crashes, disease, they have all tortured. Yet he still carries on at 92 finding specks of joy in a life that has battered him with sorrows.

There is an unfillable void now fueled by frustration, some anger and an overwhelming sense of unfairness. He was just 58 when this all started. It was a good run but hardly a long run. Only two-thirds of the race had been run. There were more miles to go. As much as was seen there was more to see. No matter how long the run is you want one more mile. It is never long enough, and it never will be long enough. We get it, but we are also stung with the idea that this road ended way to soon. We ache.

At the same time, we know while it is never a good time to experience permanent good-byes, this was the best time. Days filled with sleep and medication, eyes and legs barely fulfilling their purpose. Tthe road did continue but the destination changed. He went home.

So, we immerse ourselves, relish and cling to the good run. Pablo wasn’t exactly known for his speed, but in so many ways he won this race. Winners get cheered. Pablo’s victory can be found in the endless ache and the cascade of tears. The pain only comes from a heart that has been touched. It is a testament to his impact. He was a good guy. That’s a victory and we hurt because the physical good guy is gone. We hurt because he made us care. –

As your raise  that Guinness to Pablo (make it a tall one), let the images come forth.  I saw a guy pour in 40-plus points in rec-league game. The man could shoot. I saw a guy play a solid second base for our softball team, Red’s Coffee Shop. I joked with him about his penchant for tossing the Frisbee around because he was a stud with the disc. I can’t throw it.

Pablo coached rec teams, some with my wife and was an even-handed mentor for a load of youngsters under his guidance. There was a passion for the sports world which was such a big part of his world. It was about a game, some game, but mostly it was about people. That was his real game, and he was good at it.

My wife and I have spent a lot of time sitting around fire-pits, on our front porch, at the BRT and in other venues with Pablo and Mo. Pablo’s presence was complete with much wit, a big smile and an infectious humor. He fought the disease with all of it until the waning days.  I am reminded of an endearing response he offered when the disease began to make the days difficult – “Yeah, but I’m cute, right.” It made us all smile.

Mo, Pablo and my wife started an informal Thanksgiving Day road race a decade ago called the Tur-K which has raised thousands of dollars for Thomaston social services. It has grown to 100 people and cadre of dogs and many babies.  It is a quick (for some) 2.4-mile jog around Nystrom’s Pond and a neighborhood that starts and ends in the McMahon driveway.

It is a good run for a good purpose. There will be an empty spot this year and we can’t change that. But we will raise a glass to toast Pablo. His run wasn’t nearly long enough but it was a great run. Just look at the tears. And the smiles. They speak volumes. On Thanksgiving we say thanks. For letting us run the race with you. We are sadder now, but we are better always.

Hey Pablo, let the good times roll and thanks.