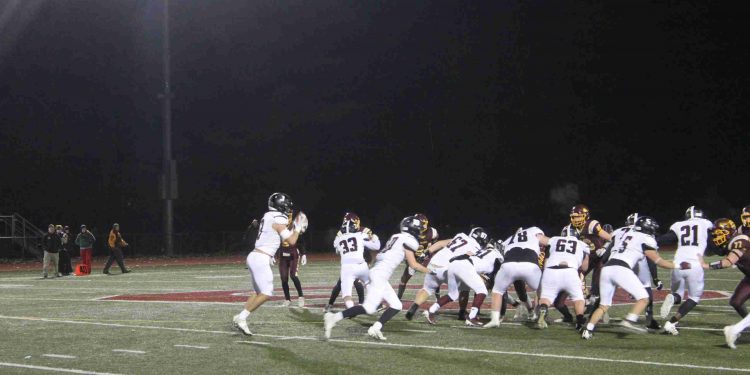 TORRINGTON: The Torrington Raiders football team wakes up this morning owning some history, which was accomplished in a most remarkable way.

The Raiders outlasted the co-op of Granby/Canton by a 37-29 final on Tuesday night in Granby despite numerous challenges, on and off the field.

On Saturday, after celebrating the teams 39-7 win over rival Watertown on Thanksgiving Day that propelled them into the post season in the number six seed, tough news spread around the practice.

A Covid-19 positive test would knock out key players on offense and defense, forcing the Raiders to bring just 24 players with them Tuesday night against the Bears.

Here’s where the magic that led to this historic win began.

All year long, this team has had the motto of being more than a team, they were a Brotherhood.

As the tea arrived at Torrington High School around 3:45 to catch the bus, there was no sense of dread, no sense of panic.

It was business as usual, starting with coach Gaitan Rodriguez and his coaching staff who set the tone for this group.

Players received their uniforms at four o’clock and got ready to catch the bus which was scheduled to leave at 4:30 for the 40-minute ride to Granby.

Game time was scheduled for 6:30 but as the time clicked by for those already at the field, the Raider bus had still not arrived.

As the Bears continued their warm-ups, sans an opponent, the Raider platers arrived and slowly made their way onto their sideline.

There was no time to hit the locker rooms, so the Raiders got themselves dressed on the sideline before taking the field for warm-ups around 5:50.

None of that bothered Rodriguez or his players.

“I’d rather just get the field, warm up a bit and get at it,” Rodriguez said. “The seniors on this team make sure their teammates are ready.”

So, with a much lighter sideline than normal, Torrington went to work, taking the opening kickoff and marching 79-yards in 10 plays, capped by an 8-yard scoring run by Clinkscales for the 7-0 lead.

Numbers? Hey, you can only play 11 at a time, most of the sidelines are window dressing for any team.

What followed was one really entertaining playoff game where you had a feeling the last team with the ball would win and after Stannard reeled in the Semonich bomb for the lead, there was still 57.8 seconds left.

Was that enough time for the Bears?

It nearly was before Stannard, who was called for pass interference on the previous play, reached in to knock away the attempt to make it a very eventful minute for the sophomore.

So, it’s on to the semi-finals in Class M, something no Raider team has been able to claim with a trip to Rockville on tap Sunday at 12:30.

NOTES: Torrington fans came out in a big way on Tuesday night, occupying nearly half the bleachers and were two deep on the fence behind the visitor’s bench.

The Raiders will be at full strength on Sunday.