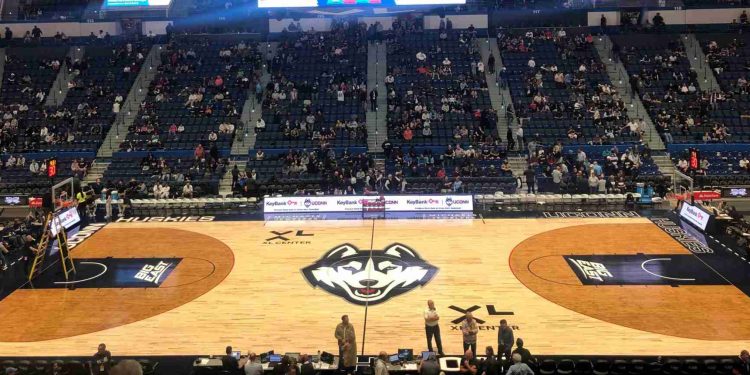 HARTFORD – It was week full of frustration, heartbreak, and illness. It ended, though, with hope.

After two ugly losses to St. John’s and Seton Hall, plus a COVID bout on the coaching staff, No. 15 UConn unleashed on an overmatched and overwhelmed Butler squad, rolling to a much-needed 86-56 win at the XL Center Sunday afternoon.

Head coach Dan Hurley and associate head coach Kimani Young each missed Wednesday’s loss due to the virus. Hurley returned to practice Saturday and saw a team reeling. The Bulldogs, with their leading scorer Manny Bates out with an injury, were just what the doctor ordered.

“You feel like you’re never going to win a game again,” Hurley said. “You could see it all over. When I got back into practice, they looked like dogs in an animal shelter. They were beat up. It was a little scary yesterday going in there and seeing what the collective group looked like.

“It was good to see us resemble the team that we’ve been for a much larger part of the season than we have been the last couple of weeks. The Wednesday game at Seton Hall (67-66 loss), I saw a team that fought much harder than it had been fighting. We lost a game because we couldn’t just grab a rebound on a poorly missed three-point shot. The heartbreak of that and the suffering that’s gone on the last couple of weeks hopefully will produce more of these type of games from us.”

Hurley and Young coached in masks, bringing back memories of the 2020-21 COVID season. Hurley notoriously struggled with masks during games, with them often hanging off his face at weird angles. He was the subject of memes on the Internet with images of his mask wedged between his eyes and nose.

“It was tough, it brought back some jarring memories,” Hurley said. “My glasses were getting foggy, I had a bunch of snot, I had to switch out masks a couple of times. Knowing where the team was at and putting that mask on today was a perfect storm.”

The experience of watching the loss to Seton Hall from his home was a less than stellar one.

“That is indescribable,” Hurley said. “When I was coaching in high school, I got thrown out of a state championship game one year, me and J.R. Smith, and I got suspended the first game (the next season). I was following that with people texting me. To sit there and have to watch that (Seton Hall) game and to not be there for the boys was…oof.”

“We needed that badly,” Hawkins said. “It’s been a tough stretch. We played our heart out today.”

The Huskies led by as many as 37 points in the second half and never trailed. After losing the Seton Hall game on a missed rebound, UConn crashed the boards with force, out-rebounding Butler 48-22.

Hurley could sense his team was feeling the pressure mount since it claimed the No. 2 ranking in the country last month, making this win, no matter how easy it was, crucial.

“There’s a certain pressure that comes with that and a mindset that you’ve got to continue to get better, even when you’re at that level,” Hurley said. “I failed these guys in terms of trying to do things to take the pressure off them. Now we’re in a more comfortable spot because our backs are against the wall. I feel we’re a little bit better when our backs are against the wall.”

Their backs will be against the wall on Wednesday when No. 8 Xavier visits Storrs. The Musketeers handed UConn its first loss of the season on Dec. 31, 83-73. Now that the losing streak is over, the Huskies’ heads are cleared. At least for now.

“We know we don’t suck,” Hurley said. “We know we’re really good and we know that over these next 10 games, we’ve got a bunch of people coming to Gampel and we have a chance of starting to stack some wins.”

A win over Xavier would go a long way toward erasing the pain and angst of the last three weeks. Sunday’s triumph was a good start.