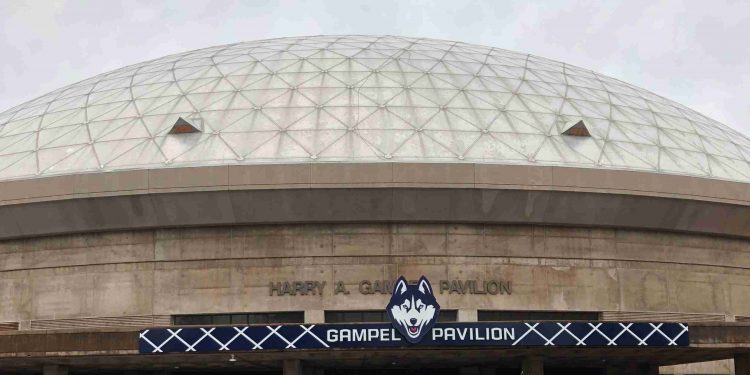 STORRS – The old cliché – “that’s why you play the games” – was on full display Tuesday night at Gampel Pavilion.

UConn, ranked second in the country and undefeated, had never trailed in the second half in winning each of its 12 games by double digits. The Huskies were 23-point favorites against a Georgetown team reeling at 5-7, having not won a Big East regular season contest since March of 2021, a span of 20 games.

Despite those glaring numbers, the teams still suited up. And for the first 30 minutes, none of those themes above played out. Led by Hartford native Primo Spears, the Hoyas shockingly led by six with 10 minutes left. At that point, the Huskies, led by their bench, had enough.

Joey Calcaterra had the game of his young UConn life, scoring all 14 of his points in the second half, awakening the Huskies from their malaise. Notably, in a 12-0 run that had Gampel shaking, the senior transfer from San Diego hit a three, another jumper, and also fed Donovan Clingan with a dazzling behind-the-back pass for a dunk that forced Georgetown coach Patrick Ewing to call his second timeout in less than two minutes.

UConn never looked back and prevailed by double digits yet again, winning 84-73. Calcaterra was recruited by Dan Hurley for moments such as this.

“I had to provide a spark,” Calcaterra said. “Things were going kind of slow overall for the team. I just wanted to get in there and provide any kind of energy I could. That’s what I was focused on.”

“I thought we did a good job of not giving them threes, but then we kind of exhaled,” noted Ewing. “Then we started giving up threes and it was like a dam just burst.”

Hassan Diarra scored five points and nailed a three-pointer which put the Huskies up for good with 8:52 left. Clingan’s stat line of two points and four rebounds doesn’t reflect the job he did defensively against Qudus Wahab, who had his way in the paint with 16 points before the freshman from Bristol was assigned exclusively to guard him.

While this was not the typical dominant start-to-finish performance the Huskies have grown accustomed to, it was a worthy test that Hurley hopes his team can grow from.

“We’ve set such a standard of where we’ve obliterated people that this allows me to get to the messaging (I need to deliver),” Hurley said. “If we slip, even a tick off of our identity, the defense, the rebounding, the domination on the backboard, things unravel. Things started to unravel today until we showed our character.”

It wasn’t perfect, but UConn ultimately did enough.

“We did not have the disruption on the defensive end,” Hurley said. “We allowed them to get way too comfortable and then the rebounding thing that rarely happens to us (UConn was outrebounded, 40-28). We got out of character on some things.

“We couldn’t have played worse on the backboard, we couldn’t have done a worse job on the defensive end of the court. We had to reach down deep with the second half deficit. We proved we are not front-runners and still ended up winning the game by double figures. You look at them and they are 5-7 coming into the game and that tells you how tough the league is and how tough college basketball is. Their starting five is a really talented group.”

Former Husky Akok Akok scored 10 points and finished with five rebounds and two blocks, looking a lot healthier than he did the past two seasons following a devasting Achilles injury. He embraced Hurley, the UConn coaching staff and his former teammates following the game.

“I love his intensity and the effort he brings,” Ewing said. “He gives 110 percent every time he’s on the court. I love everything he brings to the team.”

With the win, UConn should retain its No. 2 ranking when the next poll comes out on Monday. Hurley was relieved his team was able to dig out of this situation.

“You can’t afford to lose a home game like this and expect to win the regular season Big East championship,” Hurley said. “Losing a game like this at home comes back to get you in late February and March.”

Yes, UConn’s margin of victories could not be more impressive. But, most importantly, getting the win is ultimately most important, no matter who the opponent is. That’s why you play the game.