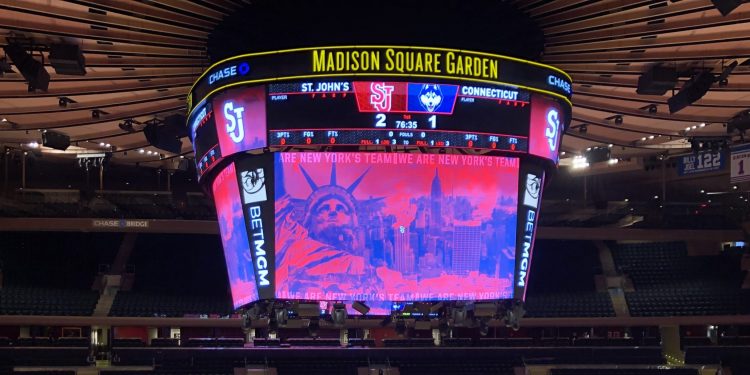 Following a frustrating loss at Xavier less than 48 hours earlier, the UConn senior was reliving the angst of that defeat in the first half against St. John’s. Martin, thanks to an ill-advised technical foul, found himself on the bench for nearly 12 minutes and the Huskies’ third-leading scorer went to the locker room with no points.

The second half was a completely different story. Martin started with a lay-up and then nailed three-consecutive three-pointers for an immediate 11 points. He finished with game-high 17 points, including a critical putback with 20 seconds left and UConn escaped Madison Square Garden with a 63-60 victory.

It wasn’t pretty by any means, but it was an important win for the No. 24 Huskies, who now stand at 17-7 and 8-5 in the Big East as we head into the final stretch of the regular season.

“Coach told me to make sure I come out aggressive (in the second half),” said Martin, who also grabbed eight rebounds. “He said to let the game come to me and then attack it. That’s what I did. I seen one go in, so I (felt confident) to go and shoot the next one.”

“That’s what your best players have to do if you want to have a great year and win a lot of games in the best league in the country,” UConn coach Dan Hurley said.

Trailing by seven with 7:46 left, time was of the essence for UConn. Martin scored five straight points, followed by Isaiah Whaley, whose putback plus a foul put the Huskies back on top at 57-55. Following the script of this game, the final three minutes was a physical war, with bodies flying everywhere after missed shots and loose balls.

Adama Sanogo, like Friday, was in foul trouble throughout, and made only four of 13 shots. But, in one of the biggest plays of the game, he recorded a block in the lane with 49 seconds remaining. Martin then tipped in R.J. Cole’s miss with 20 seconds left for a four-point lead.

St. John’s (13-11, 5-8), playing without its second-leading scorer in Posh Alexander, had one last chance, but Aaron Wheeler’s three-point attempt at the buzzer missed long and the Huskies had secured their fourth Big East road win of the season.

“We had a chance to have a great week and could have won all three, but beating Marquette, losing the close one to Xavier and winning today is still a good week, just not a great one,” Hurley said. “Winning two out of three in the Big East, we’ll take it.”

In addition to Martin, Whaley held his own in this slugfest with 11 points (5-of-6 shooting), seven rebounds, five blocks and tied for a team-high plus-9.

“We had to win that one ugly, especially with our offense and our shots not really going in,” Whaley said. “We had to gut it out. There are parts in the season when you have to fight for games. That was one of them. It feels amazing.”

“It’s an experience,” is how Hurley explained watching the sophomore play. “He’s a unique player and the sophomore version of Andre is going to have the incredibly spectacular moments. He is one of the most unique athletes out there. When he gets his full identity, he’s going to play in the NBA for a while.”

Led by Jackson, also a plus-9 on the court, UConn’s defense held the Red Storm to 34 percent shooting, and 5-of-21 from three. The Huskies also won the battle of the boards, 52-41, and had a critical seven-point edge in second chance points. Julian Champagnie, the Red Storm’s leading scorer, was held to 13 points.

“You play elite defense and you rebound the way we did in the second half, you will be hard to beat,” Hurley said.

Up next is revenge week for the Huskies. Seton Hall (Wednesday) and Xavier (Saturday) have already beaten UConn at home. Each come to Gampel Pavilion now.

Nothing was guaranteed for the Huskies on Sunday. They showed the resolve, though, needed to survive. With the regular season winding down and a return trip to MSG for the Big East Tournament looming, it’s vital to keep that composure. Nothing will be easy.