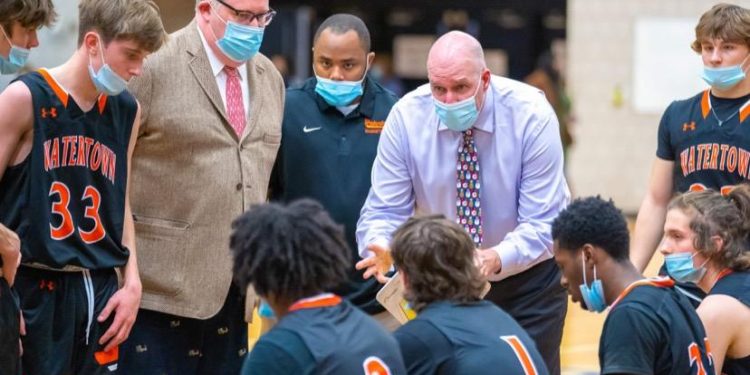 J Paul Vance Jr. His story from the LCS magazine

J. Paul Vance, Jr. got the coaching bug early. His first coaching job was when he was 13 at the Waterbury Boys’ Club when he led a team in the 8-U division.

“When I came back to Waterbury after law school in 1999, I served as an assistant for the Crosby High School girls basketball team under coach Matt Gwiazdoski, one of my high school teammates,” explained Vance, who has been the head coach for the Watertown High School boys basketball team for six seasons.  Prior to coming to Watertown, he was the head coach at Chase Collegiate (Waterbury) for five seasons. His career record is 96-129 overall, 20-75 at Watertown. His Watertown team was 2-11 during last year’s COVID pandemic-shortened season.

“I had been on the sidelines for a long time having watched my father (also J. Paul Vance, a retired Lieutenant in the Connecticut State Police) coach for 21 years at St. Peter and Paul’s School in Waterbury. He coached me for one season, my brother Patrick for two seasons and 18 more seasons of coaching other people’s kids.  His teams were known for their relentless full-court press.”

The younger Vance played basketball and football at Holy Cross High School in Waterbury and during his senior year he was part of a Crusader team that won the Naugatuck Valley League. He went on to be a walk-on with the football team at Villanova University. “I was a much better student than a football player,” he quipped.

“I have been a basketball junkie for as long as I can remember. I grew up loving the Boston Celtics and Big East Basketball. As a Villanova graduate, I am a huge fan of Jay Wright and the Wildcats.”

Vance talked about what he called his “circle of life”. “It is interesting for sure.  My father was born and raised in Torrington and he graduated from St. Francis School before heading off to Storm King, a prep school in New York. His grandfather, Moses Doyle, owned and operated Doyle’s Pharmacy.”

Vance has practiced law in Torrington for the last six years and is a partner at Logan, Vance, Sullivan & Kores on East Main Street. “I grew up in Waterbury but still ended up in my dad’s hometown. We focus our practice on personal injury, workers compensation and medical malpractice cases. It is a challenging job, but I am lucky to be able to help people in our community and across the state.”

He talked about last season. “Our biggest success was being able to have a season during the pandemic and giving the kids an opportunity to compete. Our record was not what we wanted it to be, but I am grateful that we had a season and were together. Our prior season was cut short in the CIAC Tournament and we had a solid group of kids who wanted to make a run.”

He continued, “Our kids remained resilient and we handled the obstacles. I refuse to complain. Gratitude is such an important concept. We preach to our kids about the notion of `attitude’, focusing on what we can control and not on what we cannot control. `Attitude’ is a concept that I borrowed from Coach Wright and the Villanova program and I think it is so important for our student athletes to embrace it. We will have obstacles and challenges in our lives, but the true test is how one responds to those challenges.”

He observed that families have been forced to deal with COVID in many ways—sickness and death, isolation from family and friends, online classes and so much uncertainty. “It was not fun wearing masks while coaching and playing, the social distancing was difficult and an abbreviated schedule was not ideal–but we were lucky to be together. I did not expect to have a season last year. Middle school teams cancelled and it was heartbreaking for many student athletes. We followed the CIAC directives and school policies. Masks, hand sanitizer and the like. We had at least one positive test and a few incidents where student-athletes were exposed to other students with COVID. It cost us at least one game and a lot of practice time.”

On the court, Vance admitted that Watertown struggled to defend the basketball. “I am hopeful that we can get back to playing solid team defense. It is up to the student-athletes to return some grit to our program.”

He talked optimistically about the 2021-22 season. “Cam Guerrera has the potential to have a very good senior year. He averaged 13 points per game last season. Peyton DeFeo is a scrappy guard who drew 11 charges in 12 games, I would expect him to take that next step this season. We also return seniors; Sam Weidemier, Ian Cronin and Eric Forte who will be strong leaders on and off the court.  Junior Toby Koval is as tough as nails, I look forward to watching him do the little things.”

On the competition, Vance said, “The NVL is always a solid league and I expect a lot of individual players to return with more polish to their games. Holy Cross, Kennedy and Naugatuck have been the buzz in the fall and I know St. Paul and Torrington have players that have really improved since last season.”

On his team’s chances, Vance said, “If your team can defend and protect the basketball, you can surprise some teams. My job is to have our team reach its potential and with that, perhaps some wins will follow.  Regardless, we will compete.”

Vance talked about juggling a busy career and coaching. “Organization and a very patient wife are important. My wife, Michele, does a great job making it all look easy. She works full time, runs our household and makes sure our two sons (Trey, 12 and Liam, 10) get to school and practice.”

He added, “My assistant coaches have been with me from the start and are keystones to the basketball program. Bill Unwin and Marquest Redding (and Mark Redding, who is taking a break while he starts a family) are good coaches and great men. We added Preston Soeprasetyo to the staff two seasons ago and he is a great fit for our culture.”

Vance’s dad, who was a State Trooper for the State of Connecticut for 42 years, a long stretch of those years in a very high profile position as the Department’s spokesperson. “My mother served the community as a nurse in the Emergency Department at St. Mary’s Hospital in Waterbury. My parents always emphasized education and community service.  I suppose that is how I ended up choosing a career as a lawyer and a high school coach.”

Vance said of his high profile dad, “We were proud when he was on TV, especially during some of the most tragic circumstances. But we were just as proud of him when he was a middle school coach, ran the school carnival or was in the bleachers at all of our games. If anyone wants to see him, you just need to go to any of their grandchildren’s games and my parents are probably in the stands. He just does not wear the trooper hat anymore.”

The son said the elder Vance was a tough coach who always demanded full effort. “I appreciate it more as an adult because I see how effort and attention to detail are important and can lead to wins and not just in sports. I always appreciated that both of my parents worked hard, long hours and were at all of our games and events. He knows I love coaching and being in the gym with the players. However, he does tell me that I yell too much.”