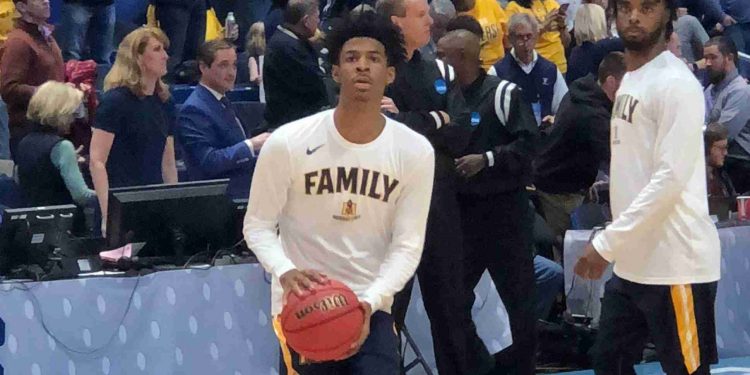 HARTFORD – I remember sitting in that particular study hall like it was yesterday.

It was my junior year in high school and we lucked in to having a sub, who agreed to put the 1998 NCAA Tournament on the classroom television. The Hartford Civic Center was a first and second round host and somehow lucked into getting North Carolina in its slate of games. The Tar Heels, who eventually beat UConn in the Elite Eight that season, were not only a great team, but a highly entertaining one featuring Vince Carter and Antawn Jamison.

If you remember, Carter, because of his absurd leaping ability and Carolina connection, was considered the heir apparent to Michael Jordan. Carter was a thrill to watch and it was a big deal for him to be playing in Hartford, even for those just watching on TV at school.

Twenty-one years later, the tournament finally returned to Hartford. And it brought a player with similar star power to Carter in Murray State’s Ja Morant, currently ranked eighth in the nation in scoring (24.6) and first in assists (10.0). The point guard is projected to be a Top 5 pick in the NBA Draft.

On Thursday, Morant notched a triple-double with 17 points, 16 assists and 11 rebounds, the first tournament triple-double since Draymond Green in 2012 (he turned out OK). Murray State, the 12th seed, obliterated No. 5 Marquette, 83-64. If you go by seeding, this was an upset. The eye test confirms the word upset is the furthest thing from being accurate.

Not only did Morant control the game, he entertained in every way possible.

There was his perfect crossover and step-back three-pointer with three seconds left in the first half. There was his vicious two-handed dunk over Joey Hauser. There was great pass after great pass leading to threes and lay-ups. There were several great passes that set up open shots but were ultimately missed.

The lively sold out crowd simply could not get enough. There was a buzz in the building every time he touched the ball with the crowd expecting something spectacular every time. After an impressive spin-move for a lay-up with one-minute left, he departed to a standing ovation. His work, for this day, was done.

As with many great players, however, Morant is tough on himself. He gave himself a grade of 3.5 out of 5 due to his turnover number of seven. There is also a strong layer of confidence. Coming from a smaller school such as Murray State, he was asked if he hoped his game opened eyes for new fans. He laughed and said, “if they don’t know me by now, I don’t know what to say.”

Racers coach Matt McMahon had a strong idea of what kind of player he had when Morant arrived at the school.

“I knew the first day he came on campus,” McMahon said. “He’s just got some special intangibles to him in addition to the athleticism, the explosiveness, and ridiculous court vision and feel for the game. He’s got an unselfishness and competitiveness about him that’s been contagious within our program.”

The hype going into this contest was how Morant would fare going against Markus Howard, also on the nation’s Top 10 scoring list at exactly 25 points per game. Howard, an NBA prospect as well, had some spectacular shots of his own in finishing with 26 points, but they were far and few in-between as he made only nine of 27 attempts. Morant won the game, the match-up, the crowd’s love, and caught the attention of the nation as he trended on Twitter with mentions from big basketball names such as Dwyane Wade.

“I really don’t pay too much attention to the hype,” Morant said. “I just go out and play the game every night.”

By the way, Villanova, the defending national champions, also played in Hartford on Thursday, beating Saint Mary’s, 61-57, to advance. That’s a gauge on the impact Morant had on the building, pushing Villanova, a school with local ties and championship pedigree, to the backseat.

On Saturday, second round play resumes in the XL Center. Hopefully after that, it won’t be another 21 years until the tournament comes back. If it does, you have a great chance of seeing the next Vince Carter or Ja Morant.