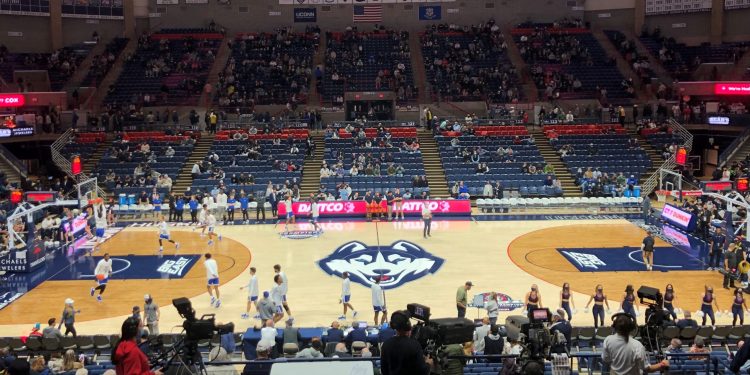 Jackson breaks out in spectacular fashion as Huskies rout LIU

STORRS – Andre Jackson put on a show Wednesday which had UConn coach Dan Hurley reminiscing about his coaching career. Hurley, in his 12th season in the college coaching ranks, came up with some pretty-high praise for him.

“He’s by far the best athlete I’ve ever coached, from speed, quickness to above the rim. I mean it’s a joke what he can do.”

Jackson’s performance in a 93-40 romp over LIU at Gampel Pavilion featured a little bit of everything and validated Hurley’s strong words.

There were dunks, the first a ferocious windmill in traffic in the first half that fired up the 8,481 on hand. His next one in the second half was even better as he threw down a two-hand slam in transition off a beautiful pass from Jordan Hawkins, who was making his collegiate debut. Jackson was also fouled on the play and made the free throw.

Blocks? You bet. In the first half, Long Island’s Eral Penn tried to dunk in transition, but Jackson had no part of it. Later, LIU attempted an alley-oop, which Jackson sent back in spectacular fashion.

The six-foot-six “guard” scored a career-high 14 points and added five rebounds, three blocks and two steals. He finished a plus-37 while on the floor and made five-of-seven shots, including two three-pointers. He was simply everywhere.

“He does freakish things all the time,” Hurley said. “A lot of things we can’t put on social media from practice because the guy he did it to would not recover.”

The 23rd-ranked Huskies, now 3-0 against a light schedule, will need Jackson to sustain this type of energy and athleticism when the games get tougher. After scoring only 12 points in his first two contests, this was by far the best college performance of his career. Jackson, listed as a guard, plays a lot bigger than the traditional player at the position does.

“His energy and his defense and getting out in transition has to be where his game begins,” Hurley said. “And then, obviously, the other elements will surface as he goes. When he is consistently that type of disruptive defender, almost like a shutdown corner in the NFL, it’s going to lead to a lot of good things on offense.”

After starting only two games last season, Jackson has started in each of the Huskies’ first three games, and he knows efforts like this will keep him in the rotation.

“That’s how I have to play every day,” said Jackson, who had never scored in double figures prior to Wednesday. “I have to learn to not have days that are lackadaisical or not playing aggressive on defense. Coach loved the energy that I played with so every day I am going to try to bring that. I think ultimately playing hard and wanting to shut down my opponent (is most important).”

UConn, which has won by an average of 46 points a game, was led by Tyler Polley’s 17 points, while Jalen Gaffney and Adama Sanogo scored 11 apiece. The Huskies swarmed the LIU offense, holding the Sharks to 27.5 percent shooting and blocking 10 shots. LIU kept it close for the first 10 minutes before UConn pulled away and never looked back.

The Huskies have taken advantage of their early soft schedule, which continues Saturday against Binghamton in Hartford. To their credit, they have not taken their opponents lightly and played hard throughout.

“This is an older and mature team that understands what’s at stake,” Hurley said. “They look around college basketball and see a lot of parity across the board, even when you look at the top teams, which is what they want to be.”

The experience on the UConn roster will be a major key heading into the harder part of its season. But their ultimate difference-maker may be one of their younger players in Jackson. He took a big step, actually his first step, toward that on Wednesday.