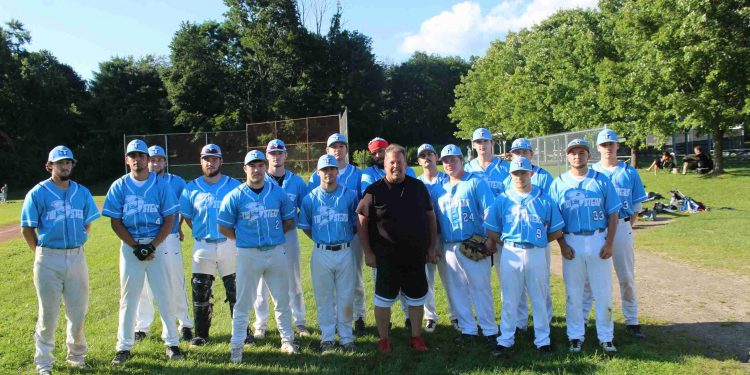 John Reynolds. Coaching is in his blood

John Reynolds has earned his stripes as a coach with various teams at several levels of competition. But he said coaching the Twisters of the Tri-state League this year was a total blast.

“Coaching the Twisters was the most fun I’ve had ever as a coach because we were not supposed to beat anyone,” said the 60-year-old Reynolds, who proudly proclaimed that he was born, raised and still lives in Torrington. “We were told that new teams that come into the Tri-State League take their lumps, especially in their first year. We put so much effort and practice into the season because everyone missed baseball due to COVID, and we proved a lot of people wrong. This is just the beginning.’

According to Reynolds, the season went better than expected for the upstart Twisters, made up of any players who had competed in Connie Mack baseball just a few years prior. “We added a lot of talent and grew close as a team. We developed a chemistry that I thought would take years to reach. We ended up one game under .500 and won a playoff series against a team that had been a top contender in the league for years.”

Reynolds indeed did a masterful job taking what was a very young team playing in a league of mostly older former high school and college players. The Twisters beat Blasius Chevrolet in the first round of the league playoffs before losing to a very good Tri-Town club in the second round. “They wanted to be good,” said Reynolds of his club. “We had 28 practices this summer and I doubt if most of the other Tri-State teams had more than five.”

Reynolds has enjoyed a long and distinguished coaching career. He coached in the Torrington Little League from 2004 to 2009, the AAU Torrington Thunder baseball team from 2006 to 2011, was a player/coach for the D Division World Champion United States Specialty Sports Association (USSSA) McDonald Flooring squad in 2000 and the Torrington Macony Connie Mack League team in 2019 and 2020.

Reynolds has played or been around sports his entire life. “I mainly played baseball, football and basketball. I did not go to college, but I played at the highest levels of slow pitch and fast pitch travel softball. I began playing travel softball when I was 18 up until I was 47.”

He “got noticed” for his slow pitch softball skills at a very young age and started playing at a highly competitive level with the Bob’s Folly travel team. “Throughout my time playing in slow pitch, my greatest accomplishment was in 2000. I was a player/coach of the USSSA D division World Champions. I had a bigger love for playing fast pitch softball because of the challenge it presented, but the opportunities around here were not like that of slow pitch.”

He said one of most memorable moments on the diamond came when he took the field against the famous King And His Court team and getting a hit off the late Eddie Feigner. “For many years, I spent almost all of my summer weekends traveling to various tournaments in different towns. During my last season at age 47, my team, Blasius Chevrolet out of Waterbury, won a state championship and we were the number one ranked team in New England. I was named Most Valuable Player, but I felt my body was no longer able to handle the seven or eight games on weekends so I retired.”

In addition to his coaching, well, really above his coaching duties, are his kids, DJ Reynolds (22) and Lexi Reynolds (20). DJ was all-conference first team his senior year at Oliver Wolcott Technical School and is the starting shortstop for the Twisters. Lexi was a late bloomer at Torrington High School, but got noticed as an outstanding shortstop her senior year. She is now playing fast pitch softball  at Post University.

“My kids are my life,” said Reynolds, “and I have worked with them to be the best they can be throughout their entire lives, and I wouldn’t want it any other way.”

In regards to his second love, coaching, Reynolds said, “I’ve always enjoyed coaching. I enjoy working with all types of kids. The competition of coaching and sports in general has always excited me.”

His said the most enjoyable aspect of coaching is teaching a team how to be a team, and “watching their hard work and dedication progressively pay off”. The most challenging? “Knowing when to be tough or soft towards your kids. It’s hard to know when a kid needs a hug or a push. There is a science to it, and I realized that a long time ago. I don’t coach any two kids the same.”

Reynolds, who works in the Connecticut Department of Developmental Services, mostly with men who are in transitional phases of their lives after getting out of incarceration, with most of the men in assisted living programs, had to learn how to balance his career and coaching. “As I got older, it became harder to balance working and coaching. I was also playing softball during the beginning years of my coaching, so I learned how to plan to make things work. I have gotten used to it now.”

A lifelong resident of the city, Reynolds believes Torrington is “a very underrated town”. He added, “I love the people and I can’t see myself ever moving from here.”

Keeping sports fun, accessible and affordable is what John Reynolds believes in. He’s spent his entire adult life making sure children and young men and women can enjoy the same privileges he did as a kid growing up and as a young adult in Torrington.