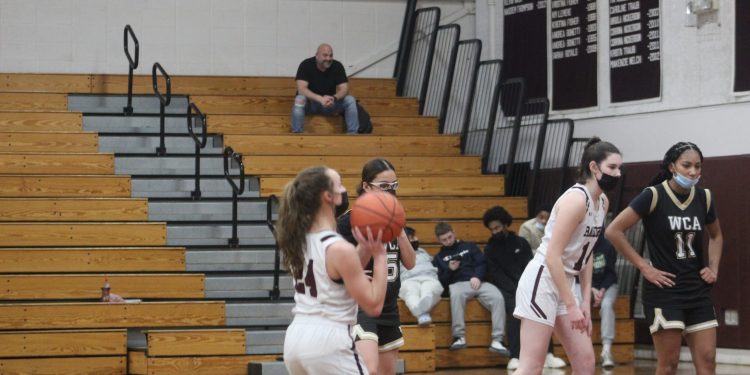 TORRINGTON: The next two weeks are important ones for the Torrington girls’ basketball team as they wrap up the regular season with six games over that stretch.

Torrington has been playing some really good basketball after starting the season 1-2.  the Raiders have won nine of their last eleven.

On Saturday, the Raiders used a balanced offensive effort to pull away from Waterbury Career Academy by a 46- 28 final to improve to 10-4 on the year

Haley Burger led that balanced offense with 11 points while the Raiders got 10 points from Julianna Latina and eight points from Amelia Boulli including a pair of key three pointers late in the fourth quarter.

The home team started slow as the Spartans jumped out to a 5-0 lead before Latina came in off the bench to give the home team their first bucket making the score 5-2.

WCA was led by Kiyarah Watson who scored twenty of her team’s 28 points but after the visitors went up 7 – 2 they did not score the remainder of the first quarter.

That allowed the Raiders to get their offense in gear with Haley Burger scoring five points and Rachel Brewer- Karimi adding three points for a 10 – 7 lead after one.

When the Raiders are playing at their best, they are a team, led by senior Marissa Burger, who like to move the ball quickly, looking for a cutting teammate for an easy basket.

Brewer-Karimi is the team’s defensive specialist and is adept at both handing out thread the needle passes as she is accepting them.

Her first trey with her team up 35-27, dim the lights; her next three two possessions later extinguished the illumination for the visitors.

Haley Burger has shown the ability to play inside while not shying away from the long ball and has been her teams leading scorer most of the year.

Latina has been key all year off the bench for head coach Mike Fritch who had high praise for her after the game.

“it’s so important to have a key player come off the bench,” Fritch said. “Julianna has filled that spot for us all year.”

Another key for the Raiders Saturday and in most of their wins was their ability to rebound.

On Saturday, their best rebounder all year Brianna Murelli pull down another 14 boards eight of them on the offensive glass.

Her ability to be in the right place at the right time has been a key for the Raiders.

The Highlanders come in with a 9-5 record.

The game of the week will be Thursday night as the unbeaten Holy Cross Crusaders (15-0) come to Torrington.

On Friday night Wolcott wraps up a busy home week with their second matchup with the Raiders this year. Torrington won the first meeting 43-32 on the road.

Get ready Raider fans, it’s about to get busy!