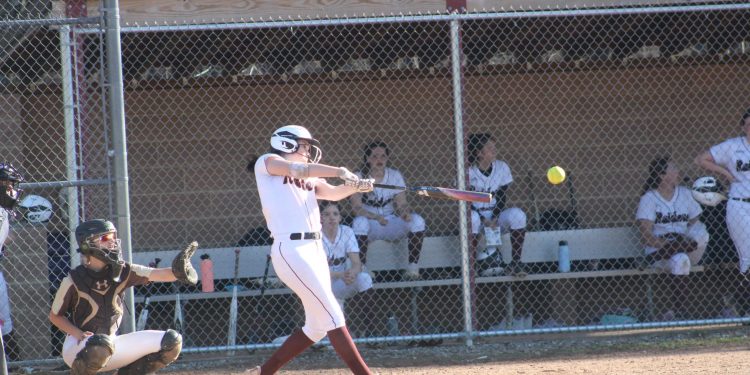 TORRINGTON: The spring sports season is one defined by stretches where teams have opportunities to make a statement, to potentially separate themselves from the pack; one way or another.

Either up or down.

Over the next seven days, the Torrington softball team will be faced with just that opportunity as they face the heart of the Naugatuck Valley League in three of their next four games.

Today, the Raiders host St Paul (1-3) after disposing of Berkshire League foe, Thomaston, 12-0 in five innings in a game most thought would be closer on Friday in Thomaston.

Monday, the stretch begins as they travel to take on rival Naugatuck (4-2) on Monday in a 4 o’clock contest.

The Greyhounds are 4-0 in the NVL so far, their two losses were in out of conference games against Berlin (10-8) and Maloney (3-2).

An 11 o’clock start awaits Torrington against Watertown (5-1) on Wednesday.

The Warriors, like everyone else so far this spring, got beat by league leader Woodland 10-0 in their only defeat and will be a tough out.

The Wolverines also got handled by the Hawks by an 11-0 final.

Torrington has been the team who played Woodland the toughest to date, losing 5-0 in the season opener for both teams.

There is a lot to like about this 2022 team, starting with their junior ace, Amelia Boulli who seems to be getting stronger each time she takes the mound.

Her 14-strikeout effort against Holy Cross was a highlight moment so far but the hard throwing right hander has learned to pitch to contact as well, relying on her defense to back her up.

At the plate, coach Sara Arburr has to like the options she has, throughout her lineup.

Junior Rachel Brewer-Karimi has been a force at the plate and a stabilizing influence in the field.

Her booming triple to lead off the game against Thomaston, led to a 6-run opening inning, which essentially put the game away.

Brewer-Karimi would score a pair of runs while driving in one in the Raiders 5-run third inning.

Torrington would send 11 batters to the plate in the first and 10 in the third.

Haley Burger gives Arburr another consistent bat in the top four and the sophomore outfielder scored a pair and had an RBI Friday.

Senior captain, Marissa Burger is the clear leader of this group, both from behind the plate and in the batter’s box.

In the lopsided win on Friday, Burger would score three times, add a pair of hits and race home in the fifth inning with a steal of home when the Bears failed to check on her between batters.

Hustle is always a big part of this senior’s game.

The middle of the Raiders order brings opposing pitchers into a potential nightmare with the second consecutive sister act in place.

Lila Boulli, just a freshman, bats fourth and wields a big bat that has proven to be explosive so far this spring.

Amelia Boulli is next and brings a big lefty bat to the plate with her.

Junior Brianna Murelli is next in the sixth spot and continues the tough out stretch opponents face against this lineup.

One of the reasons this groups plays so well together is the length of time they have been playing together as they grew up in Little League and travel ball.

Amelia Russell is playing a solid first base and chipped in with an RBI and run scored on Friday.

Olivia Rinaldi got into the act against the Bears with a run scored and keeps the pressure on opposing teams.

Aubrie Jones gives the Raiders a big bat at the bottom of the order and makes it close to impossible to relax against this lineup.

A very nice problem to have.

The last time Torrington had a team that grew up together and made their mark even before high school was the 2017 team that made a run all the way to the state finals.

This team may not be at that level yet, but the signs are there.

Much will be determined over the next week.