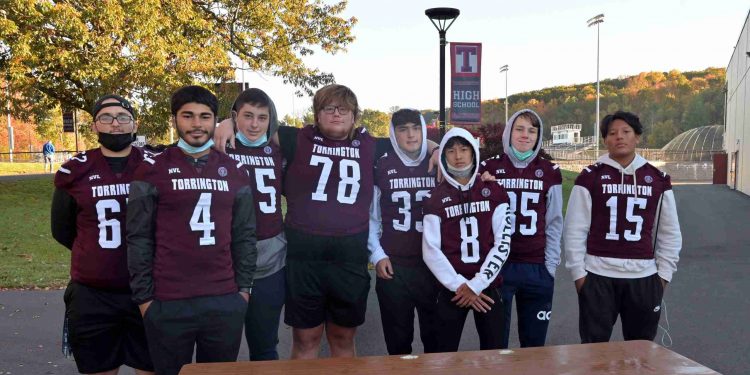 Last week of the football regular season could be a wild one.

TORRINGTON: This should be fun.

On Thursday, Thanksgiving Day, the Torrington football team will take on rival Watertown with so. So much on the line for both teams.

After not having a season in 2020 because of Covid-19, neither team, nor other local teams, could ask for a more exciting way to end the regular season

Playoffs are with reach for both squads, with the quarterfinals set for Tuesday, November 30.

The Raiders are in full control of their own destiny. Win and they are in.

Even before we get to Thursday morning at the Robert H Frost Complex, situations in a very crowded Class M field.

All three could be impacted by what the others do.

What happens on Tuesday and Wednesday, will also help shape what might happen come around one o’clock on

So, let’s start at the top.

Killingly is currently the leader in Class M with a perfect 8-0 mark and faces Woodstock Academy (7-2, #13 in Class L) at home. Killingly will only play nine, having had a game against East Haven postponed in early October.

Many teams have faced a similar problem of missing opportunities to play games for a variety of reasons this fall with Covid one of the main culprits.

Each team behind them has at least two losses.

The co-op of Granby/Canton currently sit in the two spot with a 7-2 mark and travel to Winsted to face the Yellowjackets on Thanksgiving at 10:30 at Van Why Field.

GNH has not played since they beat Ellington 14-0 on October 30. Games against SMSA and Derby could not be played and there were no teams available to fill the spots.

GNH had to pick up a game versus Amistad earlier in October to get to eight games played and start the week with a 6-2 mark.

Rockville is in the third spot with a 7-2 mark, as is their opponent, Ellington who occupy the fourth spot with an identical 7-2 mark.

Something has to give here, and teams will know when action starts on Thursday with that game being played at Rockville Wednesday night at 6:30.

The sixth spot is occupied by Avon as the week start with the Falcons hosting Lewis Mills on Tuesday night.

Next comes the Raiders who know what they have to do in order to not have to worry about what anyone else does. Win and in.

Watertown’s path is also within reach if they take care of business themselves on Thursday on the road at Torrington.

Buckle up those chin straps gridiron fans, it’s going to be a tremendous week.