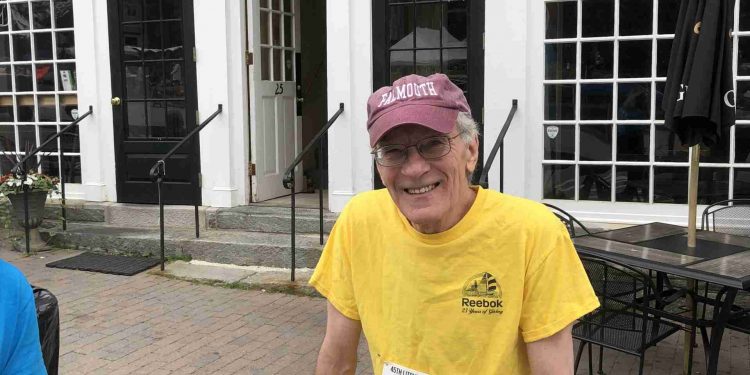 LHRR: A great day for the Boys (and girls) of the Second Sunday in June

They are to the Litchfield Hills Road Race what the `Boys of Summer’ were to the Brooklyn Dodgers. Call them the Boys (and girls) of the Second Sunday of June.  Jack, Bill and Rick Neller, Dave Driscoll, Jon Clock, Rick Evangelisti, Brent Hawkins, Beth Murphy. Collectively they are founders, nurturers, promoters of the late spring passion play that for 45 years has provided a special pleasure and demanded attention for runners near and far.

The LHRR is an elite event, its fame carrying well beyond local and state borders. The immense success  of the LHRR in the running world on an elite and recreational level  and on a social level is a product of hundreds of hands, feet, and heads, (many now gone), over the years for sure. From the barricade brigade to those who have housed the elite runners to those who man the water stations and beyond.

The Nellers, Driscoll, Clock, `Hawk’, Murphy, Evangelisti and Driscoll will be the first to tell you how many have contributed and how the race wouldn’t have ever prospered and continues to shine without a community. But they have been mainstays, steady faces of the many races through 45 years. Right from the beginning back when high socks were in vogue (check out Driscoll in early photos), the field was 234 runners and Friday and Saturday night were more torturous than Gallows Lane, they have been there.

So for them Sunday was extra special, the cherry on the top. There may have been many Sundays they couldn’t run the race (although Bill Neller and Evangelisti have been in all of them and remember most of them) but never were there Sundays the race wasn’t run. Until the Pandemic. See, Covid-19 messed with their precious baby and rendered them helpless to do anything about it.

Outside forces had changed the way of things and it wasn’t appreciated and demoralizing.

“Two years ago I went out at 4 a.m. in the morning and did the course,” remembers Bill Neller. “I did nothing that Saturday night and was just rolling around in bed.  I came back and got coffee at Murphy’s (pharmacy) and sat on Ali’s bench (his late wife and a major part of the road race.) I went to bed at 5 p.m. I missed all my friends that usually came for the race. Last year I ran the race with Jim Cardella.”

Murphy also sat with friends in front of Murphy’s two years ago and was happy to have a race last year but calls it a “non-race race.”

“I was desperate,” said the legendary voice of the race, Hawkins. “Last year I went golfing.”

“The first year was a void and last year I worked a water station, “said Clock. “Change is usually a positive for me and this was not a positive. “

Rick Neller, who drives the pace car, and his wife Kristen cruised the course in a cart the first year and cheered on the runners who showed up to run even with no race. Last year he was back in the car. “I finally came in first and beat Jon Holmes who drives the police cruiser. “

Evangelisti ran with all those guys who have never missed a race the first year with a little pomp and circumstance when John Scanlon brought at cannon and gave them a booming start.  Last year – “We were happy to have something but it was nothing special. People ran through the finish line and went home.”

Jack Neller, who runs the kids races, missed his kids’ races. “I have no idea what I did the first year but last year was weird. It didn’t feel right. No kids and everybody went home.”

Everything was out of synch. So you get the idea that this year was extra special. There was the Hawk in his usual only a mother-could-love head gear announcing the name of every runner as they camedown the home stretch.  Murphy and Clock were tooling around in a golf cart like they actually had a place to go. And doing it with major league smiles.

“I have been here since 5:45 a.m. and I have not seen one person without a smile said Murphy who always has her own make-you-feel-good smile.

Rick Neller was looking downright cheery driving the pace car – “This year is kind of like Christmas.”

All the interaction, it’s nice to see people working on the race for the first time in a while,” said Clock. It’s wonderful.”

Hawkins was pleased to have his new headware on and Jack Neller had his kids back.  Bill Neller, looking very 1977ish in his morning appearance was looking to catch up with old friends. “I’ve lost over 100 people associated with the race in the last two years. Today is very important. “

Driscoll, looking resplendent in blood-clot red outfitting, was just glad for the runners. After 45 years, it’s here. People are enjoying it. That’s the best part. “

Evangelisti was emotional on the race’s return to normal – To get it back again, I’m almost in tears. With the pandemic you had to wonder if we would ever get back to racing normal. I’m thrilled for us. After two years it hasn’t lost its magic. “

The skies got cloudy in late afternoon Sunday but there was an eternal sun to be found.

Their baby was back. And once again all was right with the world.