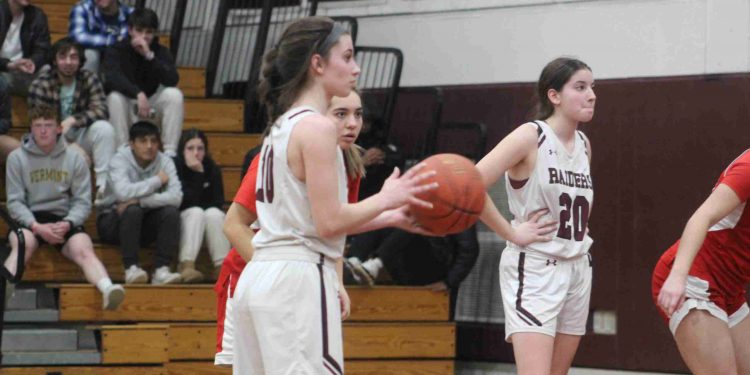 TORRINGTON: For the first three quarters of their Class L First Round contest, the No 8 ranked Torrington girls looked as if it would be a one and done as they trailed No 25 Stratford by a 33-26 score.

To say that shot were not falling would be a gross understatement.

Something strange though, happened on the way to a potential opening round loss.

The Raider found their confidence just in time.

Led by senior guard, Marissa Burger, the home team outscored the Red Devils by an 18-4 mark in the final eight minutes, escaping with a 44-37 win.

For their efforts, Torrington gets to stay home on Friday to take on No 9 Guilford, who got past NW Catholic by a 45-29 final at home Monday night.

Down 33-26 entering the fourth, thoughts of a second postseason game were not front and venter but when sophomore Haley Burger drove for a layup to cut the lead to 33-28, something sparked in the Raiders.

Brianna Murelli would convert on a free throw to make it a four-point contest at 33-29 before the senior Burger added a pair of freebies of her own to make it a two-point game at 33-31.

Junior Rachel Brewer-Karimi tied things at 33 with a pair of charity stripe conversions of her own.

What changed in the final quarter?

“We were not playing at our pace in the first half, “Marissa Burger said. “We were taking bad shots and rushing everything. We slowed down and made good decisions in the second half.”

Defensive pressure led to opportunities on offense and when Haley Burger converted on a layup with 4:15 left in the frame, the home team had their first lead at 35-33 and never gave it back to Stratford.

Marissa Burger made sure of it by scoring her team’s final nine points of the game.

The Raiders were clutch at the free throw line, converting 18 of 23 on the night.

Amelia Boulli added eight points in the win while Haley Burger finished with seven as the home team moved on to Friday and a matchup with Guilford.

More home cooking on tap for the Raiders.