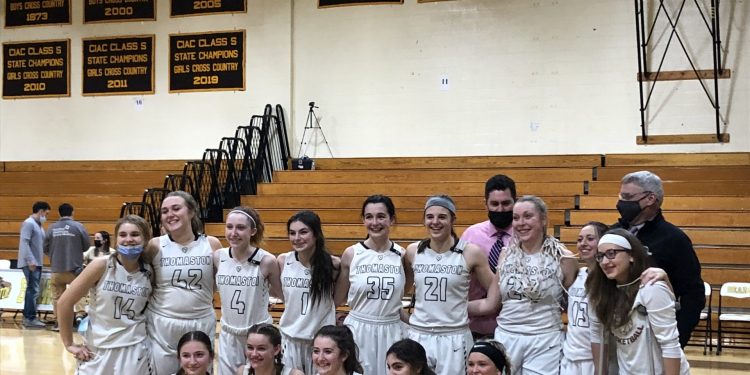 THOMASTON – “That’s a cultural win.” – On the surface it was an offhand comment from an area basketball fan about Thomaston’s overtime victory recently over Northwestern Regional in which the Bears had been outplayed for three quarters before rallying late to win.

But the remark goes far beyond a one-game assessment from someone who has never seen Thomaston play. It was a testament to what coach Bob McMahon has created over his 18-year tenure. The fan may have never seen a Thomaston girls game, but he knew the program and he knew what beats in the hearts of the Brown and Gold program.

McMahon racked up his 300th win Friday night with an easy victory over Terryville, a capper to what you might call a pretty good week that included the coveted victory mark established against Thomaston’s arch-rival at home and another Berkshire League title.

While proud of the accomplishments and certainly a guy that loves winning, McMahon doesn’t dwell on the win total.

“(The number 300) doesn’t mean much,” he offers. “There are other coaches that have more. The fun part of it all is after the National Anthem. That’s the part of the night I like, when the kids get to play. It is another night for them to play.”

But McMahon does know that within the gaudy numbers the Bear are writing a special story.

It hasn’t happened without the players and names of many of those who forever stirred a town flow off the tongue like a fine wine – Maggie Eberhardt, Abby Hurlbert, Morgan Sanson, Gabrielle Hurlbert, Casey Carangelo, Julia Quinn, Nic Schaefer, Emma Kahn, Sciarra and Brittany Brandt, Emma Sanson, Aurelia Barker and so many others. The brilliance has taken a village, the honor roll is incredibly long and acknowledged if impossible to list here.

There has been one constant through all of it. The players have made their magic and moved on. McMahon remains. Relentlessly tough and demanding while brutally honest with a tongue that can fire out flames yet also fiercely protective and loyal and really, really awesomely proud.

The players have been there, the style was instituted there, that culture has been created there. McMahon’s first three seasons (2004-2007) were a combined 22-41. Two were losing seasons. By the way note the loss total is roughly one third of his total loss total. There have been two losing seasons since then and a 278-79 mark.

The 2007-08 season saw the arrival of the Brandts, Morgan Doyle, Lizzie Eberhardt, Steph Keith and Co. and the Bears were off. The first title came when the group was seniors in 2009-10 and since then it has been nine titles in 13 years in the BL and a quality of accomplishment that has earned state-wide recognition.

The journey morphed  from a good run into a title-gobbling program, more than a subtle transformation from ‘a few good years’ to a consistent winner. It has been a montage of  fire and police escorts in and out of Thomaston, fervent school pep rallies, ice coffees named after the players at Tony Turina’s Coffee Express, rocking full houses at the THS gym, net cuttings, state-wide recognition, photo shoots, banquets and for the fans yep, some warm, warm nights at Black Rock Tavern, the local spigot on Main Street. And immeasurable town pride.

McMahon’s players and program occupy royalty status in the Clocktown. He has built something special enhanced not just by the numbers but by the status as third smallest public school in the state with girls’ numbers ranging from 105-130 over the years. The players don’t cross town lines, they live between them.

Undeniably Intertwined with the success is the culture that has been created, every bit as impressive as all glow of the numbers. Whether the winning produced the culture or the culture helped lead to the winning, and it is a combination of both,  it is a viable force. McMahon’s teams have shown plenty of game and with that there is plenty in the name.

Thomaston has become more than just a location. It is a force that has be dealt with. Northwestern Regional coach Fred Williams knows about culture. He is approaching 700 wins. His teams hold the BL win streak record, a mind-blowing 141 in a row and nine titles in a row. He knows what Thomaston is.

“Nobody wants to play Thomaston,” the veteran coach said. “I don’t know how they do it with their (school) size and they’ve been doing it for 15 years. I think this year might be Bob’s best coaching job.”

Comments like this show up on social media – “The town of champions. Those of us in Watertown are proud to be your neighbors.” – Bob Palmer.

People know who Thomaston is not just where it is. In some cases there is no clue to where Thomaston is. At the 2015 NCAA women’s Final Four in Tampa, Connecticut sportswriters brought up the Bears in conversation. Some couldn’t find Thomaston on the map, but all knew Thomaston girls basketball.

Several years ago two Thomaston stars were recognized by two inmates on a school field trip to Garner Correctional Institute. They had watched Thomaston over the several years in the state finals. Slightly unnerving? Yep. But familiarity breeds recognition.

Thomaston players are not interested in participation trophies. They know what the uniform means and losing is not a menu choice. Nobody is more golden to the program than Morgan Sanson (2016). She’ll tell you.

(Playing for Thomaston) is a lot of pride, toughness and competitive drive to win,” she said. “It is also some of my favorite memories. “

Trust me, Sanson has a lot of memories.

When Thomaston beat Gilbert to win this season’s title Sanson the Younger  (Emma) had this thought – “ I expected this. We grew up thinking this. We lost some players from last year and we gained some.” Call it a voice of culture.

Emma grew up at Mohegan Sun. She watched Morgan and cousin Gabrielle Hurlbert finish every season there. She watched cousin Abby Hurlbert hit three of the most memorable foul shots you’ll ever see to help Thomaston beat St. Paul in double in OT. Along with Barker and other teammates they watched and they learned and yearned for that kind of success.

Go back to 2007-10. The Brandt sisters do often. Mainstays of the first BL title bunch, the experience has stayed with them. Sciarra lives in Orlando now. Brittany moved back to Thomaston. But Thomaston basketball goes wherever they do.

“I’ll never forget the moments of lacing up my shoes, fist bumping my teammates and opening the locker room door ready to rumble. It is like no other feeling playing for Thomaston. We owe it to Bobby McMahon. He encouraged us and fought for us. And he taught us to work so hard for every practice and game, that there wasn’t any other way besides true hard work,” said Brittany Brandt.

“We knew that (coach McMahon) would fight for us and that is why we fought for him every single game. And all of us girls knew, without even saying a world, there was no question we would always give him our best. Because that’s what he did for us for four years.”, said Sciarra Brandt.

The Thomaston locker room is a testament to their culture It is their place, but it is something to behold a colorful, reflective den that speaks of titles and times and connects the past to the present.  You have to see it to believe it. Practices are spirited, the little Cubs want to be big Bears. A town revels in it all while shaking its smiling head.

Bob McMahon – 300 wins, a bunch of titles and a winning culture that engulfs a community. This is quite a ride.