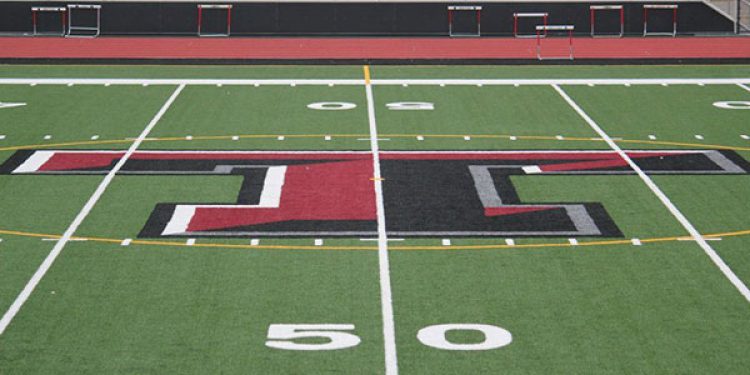 “People say I’m looking more like my father every day,” says McKenna with a smile. Fritch laughs, knowing that age will make many of us begin to look like our parents eventually. But for McKenna, looking like the legendary late James “Doc” McKenna is something to be proud of. The elder McKenna was team physician at THS for over 50 years, caring for athletes with cuts and bruises and more serious injuries with a dedication and loving approach that made everyone who came into contact with the good doctor feel better by his very presence. A general practitioner, he also kept young and old alike healthy during a long career in the medical field.

“I learned so much from my father,” said Mike McKenna. “Just the way he approached people and dealt with them, whether they were kids or his patients in his office. During games he would keep a sharp eye out during plays so he would know exactly how a player got hurt and quickly ascertain what the injury was and how severe it might be. I miss him every day.”

The two McKennas actually were in business together for some 18 years, operating a physical therapy center in Torrington called SportsMed. The elder McKenna passed away in 2012, followed by his wife, Jean, a year later.

“Mom was the glue that held the family together,” McKenna reflected. “Dad was working a lot, of course, and she would cook for us, get us to games and practices and was the enforcer around the house. We were a big family, five boys (Mike, Jim, Casey, Chris and Pete) and three girls (Mary, Kate and Laurie), were very close, and remain so.”

McKenna can recall being around sports his entire life, often with his father on the sidelines of one sport or the other while dad was working. In fact, former THS football coach Bruce Kasenetz gave McKenna a photo of him with his dad at Fuessenich Park when the son must have been around five years old.

“I remember a funny story when dad and I were at a soccer game. A player from the other team hit the ground and was twisting around all over the place like some soccer payers do when they are hit. I said that we should go and check on him. He said, `Mike, when you are hurt are you rolling all over the place or just lying there in pain until someone gets to you?’ Sure enough, the kid got up and continued playing. Dad was that sharp of a guy.”

The younger McKenna was an athlete while at THS, most notably for the football team. He was a lineman until a case of mononucleosis before his senior season caused him to drop from a solid 185 pounds to 150.”I tried giving lineman a shot in practice but I was getting my butt kicked all over the place and I dropped to number four on the depth chart. Bob Frost was a big believer in the kicking game and I did some kicking in junior varsity games and I kicked extra points as a junior. My senior year I made five field goals in addition to extra points. I always had a strong leg. I went to Mattatuck Community College where I kicked but I didn’t stay there all that long.”

McKenna moved on to Central Connecticut and Northwestern Community College where he played baseball for John Ferguson. From there he entered Wilmington College in Ohio, emerging with a degree that allowed him to become an athletic trainer.

A strong leg would get McKenna his “15 minutes of fame” in 1977. A friend saw an advertisement in the New York Post that said the Pittsburgh Steelers of the National Football League were holding a kicking contest at Yonkers Raceway in New York that would culminate in a contest between two kickers in the infield of the track at night. His brother, Pete, said he would go with McKenna to the event if he would give it a shot.

“I went down and there was a bunch of us kicking in the morning from various distances. I didn’t kick all that well from the shorter distances but I nailed a 50-yarder and that got me into the afternoon sessions where I really kicked well. I kicked against another guy in the night session and the crowd was there and into it. It made for a very intense competition. We started at the 20-yard line and moved back. I made everything and then made a 50-yarder and the other competitor missed.”

That victory at Yonkers earned McKenna a trip to the Steelers’ rookie camp where he again kicked well, which got him to the team’s formal training camp prior to the start of the 1977 season.

“I kicked well at the camp but the Steelers had Roy Gerela, who was a Super Bowl hero and the team was in the middle of their great run in the 1970’s,” said McKenna. “I mean, who were they going to keep as their kicker, me or Gerela? I gave it my best and I had no regrets. Things could have gone differently here or there but it was a great experience. I got to meet Art Rooney junior and senior and I was treated very nicely. I had Art Rooney, Jr. come up to me the in the locker room and I was told that I had influential friends back in Torrington. I didn’t know it at the time, but the Rooneys and Francis Oneglia (of O&G) had worked on some projects together and were good friends.”

After McKenna’s brush with fame he settled into the task of finishing college and worked several jobs before he joined up with his father in the physical therapy business. A gym teacher at Torrington High since 2000, AD was about the only role McKenna had yet to fill at the school. He coached football, baseball and swimming and served a number of years as the athletic trainer. When the job of athletic director opened up in 2012, he applied and got the position.

That McKenna, a member of the THS Hall of Fame who was also trainer for the Torrington Twisters for a number of years and coached football at the Forman School for a year, was watching a volleyball game was no rare occurrence for the AD. “I’ve always loved being around sports and if I wasn’t athletic director I still would be going to games to watch the kids play. Someone asked me once why I’m at so many games when I could send someone else. But I really enjoy being at the games and getting to know the kids. It’s important that they see me around and it gives me a better understanding of what they are doing. I can mention to them the next day about a great play they made or a goal they scored. It makes it more personal.”

McKenna said kids are little different now than when he was a student, except for the immense social pressures they face. “The Internet and social media has changed everything. It puts a lot of pressure on them and opens up for online bullying and kids doing or saying inappropriate things that can get reported to me by someone else. I can’t ignore these things and have to deal with them. I want the kids who do get into a bit of trouble to take ownership and realize how it affects their friends and teammates. If a kid gets suspended for a few games it affects his coach and the team, not just the kid being disciplined. It’s important that they understand that. We always want to walk kids away from mistakes they make and hold them accountable so that it won’t happen again.”

The COVID-19 pandemic and resulting regulations and guidelines have been a challenge for schools, McKenna said, with sports certainly no exception. “We have had games cancelled because a player on one team or the other has tested positive or been around somebody that tested positive. Scheduling and trying to fit all the games into a short window is always a tough job, but this year it’s been compounded by COVID-19 concerns. But it is what it is and we have been doing OK with it thus far.”

McKenna has three children, son Ben, and daughters Claire and Grace. Claire was a fencer for a club team out of Danbury, Grace played volleyball at THS, and Ben was a superb hockey player, as well as a golfer. He went on to play at Post University and is in the initial stages of a hockey officiating career. Grace is a fourth grade teacher in South Windsor, and Claire is married (husband is Jonathan), lives in Austin, Texas and works in the information security field.

“A gentleman asked Ben if he was interested in becoming an official when he saw him skate. That’s one thing you have to be really good at to be an official. He started out doing some club hockey games, moved to Division III, and recently got his first Division I college assignment. He really enjoys it.”

McKenna downplays his role as the man who heads up the athletic department at THS, saying that he is merely “giving back” to all the coaches and others who helped him during his career.

“I’m just passing the flame,” he said, as a player scored a point in the game taking place nearby. “There’s a lot of us doing the same thing. I feel lucky to be doing what I’m doing.”

“Doc” McKenna would certainly be proud of his son’s attitude, because giving back

to the school and community was his mantra for so many years.