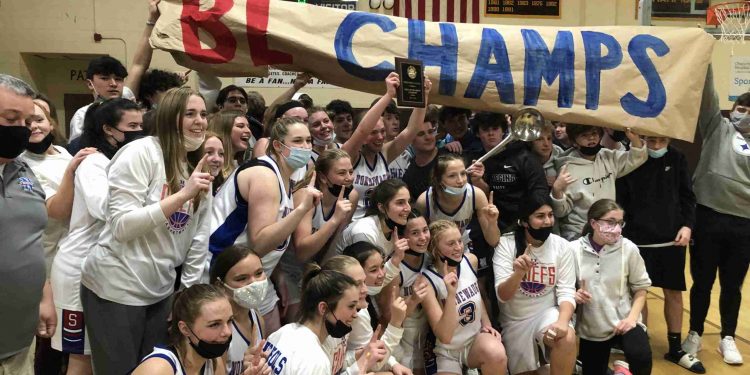 THOMASTON – Adam Brutting had stood there before. In a different time and era, in a different century. He had smiled the smile of champions as only a 17-year old can do when you sit on the top of your basketball world.  And indeed his Thomaston High Golden Bears (1989-1991) had ruled supreme winning two BL titles, two Class S state titles and posting a 50-2 record over two seasons.

He didn’t think about that Thursday night. Maybe it’s just those of us who witnessed it the first time around do. But his smile was equally bright as he stood on his old Thomaston High floor.  At 49, He is far from the defensive-minded kid of his youth, this was a coaching smile about the present.

Now the long-time coach of Nonnewaug, he had watched his team grind out a 49-37 victory over a determined Gilbert squad and its mercurial freshman Emily Arel who were looking to complete their own scintillating run through the tournament. Just two days earlier the Yellowjackets had posted a stunning 37-33 win over league champion Thomaston ending the Bears two-year, 31- game league win streak.

“I’m not thinking about (the past) at all,” said the mighty proud coach. “My kids didn’t even know about it. A week ago we were here and Toby (Denman, assistant coach) had said to the kids, “he won here.” They didn’t know. He pointed to the banner on the wall and the years. “

As Brutting stood there watching his giddy team which had lost twice to Gilbert during the season cut down the nets and laugh and smile and celebrate winning the Berkshire League Tournament title he basked in the contentment of achievement. Not his but his team’s. If three decades prior had been a lot about him this was about them.

“Through all the ups and downs of a season they bring it every night, “he lauded.

The Chiefs had fallen behind early, 8-0, and 13-3. They trailed 13-8 after the first period. But a funny thing happened on the way to runnersupville. That `bring it every night’ attitude,’ senior Skyla Starziski and Erin Classey.

Guarding Arel is kind of like trying to follow a moving laser point. The diminutive guard is in permanent shot of a cannon mode, goes to the hoop like a runaway train and has a lightning release from the outside to go with tremendous range.  She can torture you and has this season.

Starziski was having none of it. She hounded, harassed and irritated Arel into a maybe next time night. Arel finished with 11 points and never found a dose of rhythm.

“I just said to myself that (Arel) was not going to get more than 14 points,” said Starziski. “She’s very good and I just pushed through. I just kept looking at her eyes and kept my feet moving.”

“Skyla said to me in the pregame that, “I’m going to give you everything I have tonight.” said Brutting “With 50 seconds left in the game I told her to finish it and she had that look in her eyes and said let’s go.”

Then there was Classey who picked up the offensive end with five three-pointers and 17 points.

Gilbert coach Gerry Hicks didn’t need to think long and hard about the differences this time around after two wins during the regular season.

“Nonnewaug’s defense was much better than in the past. They worked hard to shut down Arel. And we made some turnovers that were not typical of what we did in the last few games. And No. 2 (Classey) really hurt us. She hadn’t done much against us in the other two games.”

Brutting watched his team step up after the slow start and stay up when Gilbert refused to go away. The Chiefs regrouped to take a 19-17 halftime lead and still led, 29-26 after three quarters.  With the score tied, 34-34, Nonnewaug ripped off seven straight points to put the game away. Mallory Tomkalski (14 points) hit six free throws in the final period.

The kid stood there a long, long time ago with a wide-eyed smile that only champions can conjure up. He wasn’t thinking about that smile Thursday night. But I can tell you it was just as broad just as satisfying. He knows the arena, he knows titles in the arena, the wall will testify.   He played with a great team, this time he coached a champion team.

One more time never gets old.