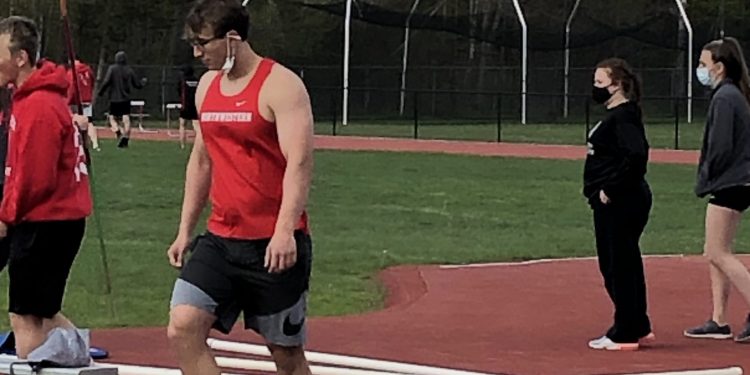 Chris Persechino was following in his older brothers’ swim strokes when he entered Northwestern Regional 7 High School. Both Ryan and Bobby were accomplished in the pool for the Highlanders.

The younger Persechino, who lives in New Hartford, swam and played basketball as a freshman and also swam his sophomore year at Regional 7 before climbing out of the pool and dedicating himself full time to the throwing events in track and field. The move paid off handsomely for the 18-year-old, who is headed to Roger Williams College in Rhode Island this fall to continue his education and likely his athletic career.

“I swam for the first two years and basketball for one in high school but they just weren’t for me, so I focused on track and field, which I began in middle school,” said the 6-3, 230-pounder who has the physique of a football linebacker. “I also liked the fact that in track and field you can compete as an individual, something that I could concentrate on by myself. You are judged by your results in events.”

Persechino dedicated himself to becoming stronger by working out year round at Club 24 in Torrington and improving his technique in the shot put, discus and most notably the hammer throw. Chris Heacox, whose daughter, Katie Heacox, coaches the Housatonic High School track and field team and was herself an accomplished hammer thrower, saw something in Persechino and the latter began to travel Housatonic to work with Heacox.

“Chris really taught me a lot and helped me improve as a hammer thrower,” said Persechino of his personal mentor. “I owe a lot to him. It was a lot to travel to Housatonic, but my mom (Laurie) and dad (Robbie) would drive me and I also credit them for sacrificing their time to make me better.” He also gave a nod to his freshman coach at Northwestern, Rebecca Perry, his coach sophomore and junior seasons, Paul Burch, and Will Tellier, his coach this past spring, for helping him become an outstanding athlete.

Heacox obviously was right when he saw something special in Persechino. The youngster found success in the hammer throw as a freshman, finishing first at the Berkshire League Hammer Festival (at Housatonic) and placing seventh in the event at the State Open. He also finished first in the event at the BL Hammer Festival as a sophomore and vaulted to second at the State Open that year.

Persechino was primed for an really big junior season but his, and that of all other high school athletes in the state, was preempted by the COVID-19 pandemic. “It was tough and it was a setback for all of us. I threw the hammer 136 feet as a sophomore at the State Open and I felt maybe I had a chance compete for first at the State Open as a junior. But after everything shut down, I kept training and working out to get stronger and improving my technique.”

Persechino had a great showing at this June’s State Open at Veterans Stadium in New Britain. The now graduated senior finished fourth with a throw of 154-feet, 10-inches, a toss that was almost 10 feet beyond his seeded throw and one that broke a school record that stood for almost 20 years. “It was a strong field (Coventry’s Alex Krause won with a throw of 196-feet, 9-inches) and I was quite a bit behind the first and second place finishers but close to third place. I was happy with my throw and I know I can improve and increase the distance.” He plans to compete in the event at this summer’s Nutmeg Games.

While his hammer throwing ability put him on the state high school sports map, Persechino also excelled in the shot put and discus. This past season he finished first in both events at the Berkshire League Championships and then placed fifth in the discus and eighth in the shot put at the state Class M meet.

The “hammer” used in the event is not like any of the tools also called by that name. It consists of a metal ball (16 pounds) attached by a steel wire to a grip. With roots dating back to the 15th century, the contemporary version of the hammer throw is one of the oldest of the Olympic Games’ events.

The throwing motion involves about two swings from a stationary position to generate the initial momentum. Then the hammer is swung around three, four or very rarely five rotations of the body in a circular motion using a heel-toe movement of the foot. The ball moves in a circular path, gradually increasing in angular velocity with each rotation with the high point of the hammer ball toward the target sector and the low point at the back of the circle. The thrower releases the ball at the side of the circle as the hammer’s velocity tends upward and toward the target. During the “launch” process, the thrower is given a circular area to perform the throw. The athlete is not allowed to step outside the circle before the object has landed.

“Throwing the hammer is a lot about using your leg strength to sit down during the motion and generate power and then it’s timing when to perfectly release the hammer,” said Persechino. “That’s why I have been working hard to improve my leg and lower body strength for that explosion at the moment you throw.”

Persechino is looking to walk on to the Roger Williams (Division III) track and field team. He received interest from colleges such as Springfield and Williams (in Williamstown, Massachusetts) but chose the Rhode Island school because “It has top academics,” said the honor student (4.36 GPA as a senior), “and I really liked the campus. It’s also close to home. I looked up the record for the men’s hammer throw and it is 178 feet, so I think if I continue to improve my technique, get stronger and keep getting great coaching, I think I can compete with throws in that range.”

Chris Persechino chose a different athletic path and the change made a world of difference for him. Now, he hopes, it’s on to the next chapter of his story at the collegiate level.