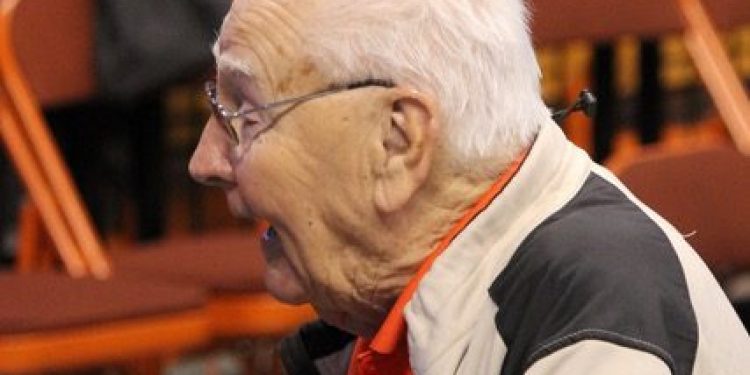 On the road with Harry and the Mayor

(Editor’s Note: The area lost one of its biggest sports fans and high school basketball enthusiasts with the passing of Thomaston’s Gene Sleeper' McMahon recently. McMahon would travel anywhere with his pal Harry Innes to watch a game. Rick Wilson grew up across the street from McMahon and chronicled the duo on the road almost two decades ago.)

It’s 5:15 on a Tuesday afternoon in late winter and Harry and the Mayor are a long way from home. Sheehan High School in Wallingford to be exact, 30-35 miles away from their home base of Thomaston.

It isn’t a craft show, some sightseeing or a wrong turn that has led the durable duo over the river and through the wood to Sheehan. It’s high school basketball and on this night the gymnasium is alive with players’ hopes and dreams in form of the Class M girls’ semifinals.

It’s the type of venue you will find Harry and the Mayor at often and anywhere. It gets their blood moving. There is nowhere else they would rather be at this time of the year. The more road trips the better. Fill `er up and let’s go.

Harry is Harry Innes and the Mayor, is former Thomaston First Selectman Gene McMahon. If there is a basketball game, they’ll be there. Particularly come state tournament time. It is just what the love to do and have been doing for more than 40 years.

Harry figures they have been traveling the high school hoop highways and byways together since at least 1963 when he moved back to Thomaston from Watertown. They are the walker and the talker, basketball junkies who enjoy sharing a passion together.

They have seen offspring play and relatives. Harry’s granddaughter, Heather Boguslawski was a three-sport All-Stater at Thomaston (1985-89) and the school’s first thousand-point scorer.

McMahon’s three sons, Paul, Denny, Tommy and Bob all were athletes and his granddaughter, Amy Belonick, had a stellar career as a pitcher for the Holy Cross softball team.

But those days are gone. It is the game that draws them now.

“I love it,” McMahon said. “I don’t want to sit home and watch TV every night.”

So off they go. McMahon usually drives because Harry doesn’t see well at night. Harry is still fit and fiddle despite the risks.

Often they will go out to eat after the game and make a night out of it. They don’t always see good games but they usually always have a good time.

They have seen the best over the years with special fond remembrances of Calvin Murphy during his days at Norwalk and the old Stanley Gym in New Britain. These days they stay mostly in the area during the regular season.

This season they watched all of the Thomaston girls’ games. McMahon’s son, Bob is the JV coach. On other nights you might see them up at Wamogo, down at Holy Cross or Naugatuck or up at Northwestern Regional for boys or girls action.

Once the tournament starts they will get to as many area games involving area teams as possible. When the area teams are gone, they look for the good games.

At Sheehan High they watched Northwestern Regional play Notre Dame-Fairfield and Career-New Haven tangle with East Catholic. The following night they were back at Sheehan to watch the Class S semifinals, which featured East Granby against Old Lyme and Trinity Catholic against St. Paul’s.

Friday night they were off to Farmington High School to check out former Holy Cross and UConn star Jim Abromaitis’ son play as Farmington hosted Ledyard.

Prior to that, Harry and the Mayor had seen Ellington and East Catholic, Litchfield and East Granby and Northwestern against Plainville. Saturday was spent at Central Connecticut watching the state championship games.

This week, the boys will get their due.  No rest for the weary, but what a way to get tired.

On this night, Harry and the Mayor along with friend Stanley Hurlbert, have left the driving to Bill Ryan, an old friend and Thomaston High girls coach. That means two good games but no dinner after.

“Harry and I have no problem with our wives, but these guys have to get home,” McMahon says.

McMahon, nattily attired in a pair of corduroys and a dark sweater, is a people person. It is a characteristic that comes easily to him, honed by his days as a politician and before that proprietor of a soda Shoppe.

His pregame involves conversation with former Thomaston High boys coach Muffy Gomes who is in the crowd and one of the game officials, Lou Moscaritolo. He is rarely still and always ready to go.

Harry is the quieter of the two. A student of the game, he can pick it apart with the knowledge of somebody who has seen much and learned more. While the Mayor is kibitzing, Harry sits and talks quietly with a reporter.

After the opening tap, rapt attention is given to the game. Northwestern is locked in tight battle with Notre Dame and will end up winning in the final seconds, 50-47. Harry and the Mayor are rooting for the Highlanders, but it is a silent loyalty.

They just sit there and enjoy what is transpiring. They will watch the second game with less of a rooting interest, but and equal appreciation for the talent and the game.

By game’s end it is getting late and they are a long way for home. But, no matter. They aren’t driving tonight and there is no other place they would rather be.

Tomorrow they will be back again. After that there will be another gym and another game. It is what they have been doing together for more than 40 years.

It is what they have loved doing for more than 40 years. As long as there is a gym and a game, look for Harry and the Mayor. Home is where the heart is and that could be anywhere you hear a ball bouncing and a whistle blowing.