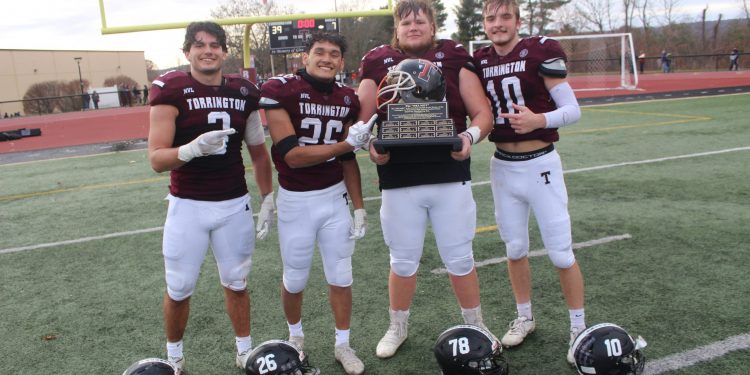 On to the Class M States! Raiders top Watertown, 39-7.

TORRINGTON: The Brotherhood moves on.

The Torrington Raiders football team gets to keep playing in 2021 after beating rival Watertown at the Robert H Frost Complex by a 39-7 final.

Three touchdown runs by Sean Clinkscales and two by Tyler Semonich (one passing TD as well) backed by one of the best offensive lines in the Naugatuck Valley League, made sure there would be no upset at home this day.

No way was this group going to stop the magical run that began with early season road wins that put them in position for playing game eleven.

No way was this group going to be denied after missing the 2020 campaign because of Covid-19.

It’s been a team, and as I said at the top, a Brotherhood who refuse to not give 100 percent for each other, each time they take the field, be it practice or game time.

A single-wing offense lives and dies with their line and the Raiders have a marvelous offense line, led by co-captain Michael Isczak who, along with mates Aiden Rivera, Josh Coleman, and Brendan McGowan opens holes for Semonich, Clinkscales and Exodus Rosado game after game.

Young men of character, not characters.

You see it in practice, you see it inside the school walls and out in the community.

On Thursday, so much was at stake.

It was simple for the home team. Win, and you’re in.

Watertown was playing for a playoff themselves with an identical 6-3 mark coming in.

The visitors had a tall task ahead of them is slowing down the high-powered run game of the home team and came out with an interesting strategy to start the game.

Before each snap, the Warriors quarterback, Sam Weidemier waited almost the entire 40-seconds of the play clock before taking the snap, something you mostly see towards the end of games when a team is up and trying to run the clock.

It worked on their first drive as the visitors ate nearly five minutes before a fumble that was recovered by Clinkscales ended the treat. Eight plays later, Semonich found a wide-open Rosado for 33 yards and a 7-0 lead.

Watertown would respond just four plays later when Weidemier threw his team first pas that connected with Cam GGuerrera for a 55-yard TD that knotted things at 7.

As the second quarter began, the Raiders waisted no time in verifying why it was a good idea to keep the Torrington offense off the field as it took a little over a minute for them to drive 46-yards for the go ahead score, this one by Semonich from seven yards out.

Was this going to be a back-and-forth contest, dominated by each offense?

It sure seemed that way for but as the Warriors converted on a pair of fourth down tries before the home team held on try number three, giving the ball back to Torrington.

The Raiders have the ability to strike so fast and went up 20-7 on a Clinkscales 22-yard run.

Torrington scored on every possession they had on Thursday, six for six.

At 20-7 at the break, the Warriors were on the brink but looked like they may change their own luck after recovering the second half kickoff on an on-side kick.

They would turn the ball over on downs though and the Raiders iced things with a 16-yard TD run by Semonich.

So, part two of this team’s objectives is in the books.

Goal number one was to win the Iron which they do with a perfect 4-0 mark.

Goal two was to make it to the postseason.

Check on both marks.

NOTES: It was a beautiful morning for football and a good-sized crowd seemed really happy to be back on the sidelines after the year off in 2020.

Normal is a strange concept right now but for this day, it did feel that way.

The game marked the first-time head coach Gaitan Rodriguez has coached at home on a Thursday.

Mother Nature had complicated efforts in previous attempts, causing the game to be played either before or after the last Thursday in November.

The Gilbert/Northwestern/Housatonic co-op beat number two Granby/Canton by a 21-0 final on Thursday morning, earning the Yellowjackets into the playoffs in the number eight spot and dropping Granby/Canton to number three.

If all stays as it seems it will, the Raiders will travel next Tuesday to Granby for the quarterfinal match up.