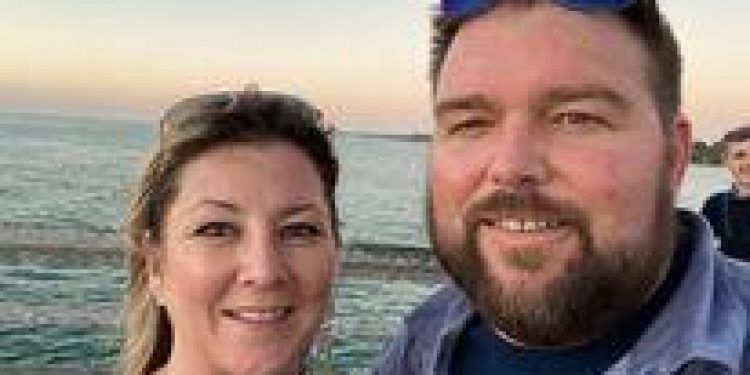 Perfectly Imperfect – My Time With a Legend

After chatting for several months, Ora and I had our first date in May of` 2015 at a restaurant in Middletown. I ordered the scallops and several glasses of wine, and he had the pasta Bolognese and not much to drink.  Since he was a gentleman, he scooped up the bill. He later told me that he was sweating over what the bill’s total would be.

This became a long-standing joke with us: “I’ll have the scallops,” I’d say with a wink, to which he’d reply, “Well, then I guess I’ll have the Bolognese.”

During one of our earliest conversations Ora informed me that he was “a legend” in Torrington.

He stated it as a simple fact. I rolled my eyes and thought “Who is this guy? He sure is full of himself…”

Despite that, I had to admit that I was already hooked. For the next two years we

dated casually, until suddenly it wasn’t casual, and we were ready to fully commit to each other.

After the introductions had happened, we spent our first family vacation in Florida visiting every corner of the state. Our catchphrase that trip was “making memories” and make memories we did. More family trips followed, and the next thing we knew, we were all living under one roof.

The five of us were a blended, perfectly imperfect family that was enjoying life and each other.

​​That first year of living together was not without growing pains, but we learned, and we grew stronger together. Together we hit our stride and life was good.  Together we celebrated each of our children’s accomplishments. He was so proud of his kids: his son, a quarterback and swimmer for Torrington High and his daughter, a gymnast and musician who graduated from

Torrington as Valedictorian.  Ora was also proud of my daughter, Abby, a cheerleader at Lauralton Hall.  Together, we attended football games, swim meets, parades, award ceremonies and cheer competitions as proud parents.

Ora’s particular brand of humor was not for the faint of heart. Yet if you were the target, you knew you were loved.  He would delight in publicly embarrassing his friends and family and was notorious for sending inappropriate texts to his unsuspecting victims. One night I found him

crying with laughter over traumatizing his sister, Alison, with one such text. Teasing, joking, and always laughing—with Ora there was never any silence in the house. Over and over, I would hear, “Hey Babe. Hey Babe. Babe. Hey Babe!” I would playfully chastise him with, “you are exhausting!” It was a badge of honor he wore with pride.

On our first trip to Florida, we made a plan to relocate there once our youngest, Abby, entered college in the Fall of 2022.  We were looking forward to being empty nesters and starting that new chapter of our life together.  We’d dream about what home we would buy—would it be a condo or house? Would it have a pool? Be on the beach? Ora jokingly (I hope) told me his dream was to have a hot dog cart on the beach somewhere and I resigned myself to having the conventional job of bringing home the true bacon.

About two and a half years ago, our plans were indefinitely put on hold when we received devastating news: Ora had stage 4 colon cancer/metastatic disease.  After the initial shock and horror, he decided that he would continue to live his life as normally as he could.  In true Ora fashion, he wanted no pity and did not want to be treated any differently.  So, we had no choice but to fall into step alongside him.

The treatments began during the week of Thanksgiving 2019.  Every two weeks, I would sit with him for the day while he received his various infusions of “poison,” as it was often referred to by the nurses.  It’s no surprise that he took his treatments like a champ and eventually had all the nurses wrapped around his finger.  Some weeks were worse than others and he would need an extra day or two to snap back to his old self. Treatment plans changed and locations changed, but he kept on; still living life to his fullest ability.

Through it all, he remained positive and optimistic.  Before Covid shut everything down, he cheered at O’s football games at West Conn. Last summer, he beamed with pride as Daley gave her Valedictorian speech.  Later that summer, we were part of the caravan to help Daley get settled into her new adventure at Belmont University in Nashville.  Shortly afterwards, he surprised O on his 21st Birthday with a trip to Chicago to watch their favorite team, The Bears.

With two of the three in college, the house became very quiet, and the pantry remained fully stocked. We had more time to ourselves, time to spend with friends and have new experiences, but we missed the activity that had once hummed through our house. Ora was over the moon to have everyone together in October to celebrate his 46th Birthday. He blew out the trick candles

on his cake surrounded by his entire family.  If he made a wish, I’m sure it was for more time with his family. Or maybe it was that his fantasy team won the league…

This past Christmas was not the usual jovial get together, due to family losses and a Covid outbreak within the family.  We spent Christmas morning unwrapping presents via Facetime and trying to make the best of a sad and unfortunate situation. We had our usual Christmas hibachi dinner at Fuji’s with the family and then went to our first movie in years.

After Christmas, the two of us were able to escape the frigid weather and enjoy a little R and R at my parents’ house in Naples. We enjoyed the time away.  He especially enjoyed the pina coladas by the pool!  On his last night there, we went to the Naples pier to watch the sunset.  That evening, it was the most beautiful sunset I’d ever seen. As the sun dipped into the Gulf of Mexico, a boat cut across the horizon, a pelican flew overhead, and a dolphin broke the surface of the water below while we stood in awe, just taking it all in. Then he began to speak to me and all I heard were words and phrases like, “you have been my rock,” “we’ve been through a lot,” and “you deserve this.”  I turned to him, stunned to see him holding a little blue box.  I do remember my exact words were “What the hell are you doing?!?!”  He laughed, opened the box, revealing a beautiful sapphire ring (my birthstone), and asked “Would you do me the honor?”

The answer was “Absolutely!!”  After sharing our news with family and friends, we returned home to reality.  Newly engaged, we started dreaming of what our wedding would be.

Destination or local? Small and intimate with a party? Or would we elope?

We didn’t have much time to enjoy our newly engaged high before we both became sick from Covid.  As fate would have it, Ora became gravely ill and needed to be hospitalized. I dropped him off on Thursday, January 12 for some breathing treatments then went home to my quarantine.  Ora didn’t come home that day.  He needed to stay for a few days.  A few days

stretched into a week.  He was not happy about being there and we hoped a visit from Daley would cheer him up.  The nurses told me how he bragged about his kids and showed them photos.  He was looking forward to seeing his daughter.  Once I was able to come out of

isolation, I spent the next two weeks in the hospital with him, coordinating the acquisition and delivery of whatever his cravings were—which were on par with the cravings of a pregnant woman.

We still talked about our wedding plans, as it seemed Ora was improving, and it was safe to do so.  We decided that we were going to elope with our three children to Atlantis in the Bahamas in the spring. We discussed dates and ideas until he grew tired.  The little signs of improvement slowed and sadly, reversed direction. He grew weary and tired, and we were faced with the

harsh reality that he would not be coming home.  Despite his protests, his close friends and family came to visit him, showing their unmeasurable love and support, saying what they needed him to know, which he was grateful for.  He was aware of all the messages of encouragement and all the love that was sent.  On February 2, 2022 at 4:31 pm, he earned his angel wings with his family and friends all holding him tightly.

So, instead of writing my wedding vows, I am writing a personal tribute to the man I loved so fiercely and will love forever. Ora lived up to every bit of the legendary status he claimed he had on that early date. He was passionate, driven, full of life, and he loved his family above all. He instilled his determination, work ethic, and love into his children, his legacy. We are all filled with grief today. I lost my soulmate, his children lost their father, his family lost a brother and a son, and countless friends have lost their best friend. The world is emptier without his infectious laughter. Though the loss and grief seem insurmountable now, I know that the days will get easier with time.

We are going to be okay because he would not have it any other way.