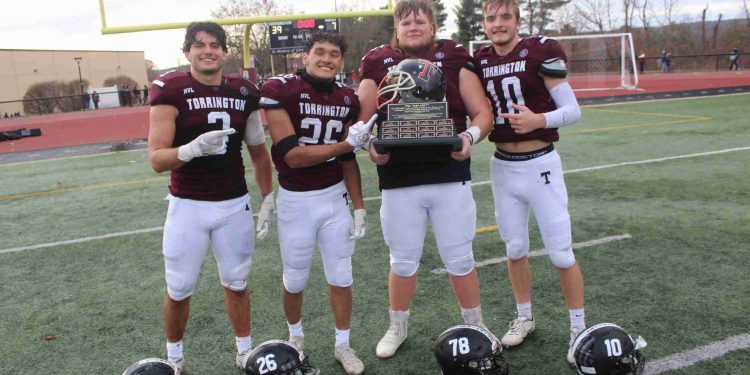 TORRINGTON: The post season begins for the Torrington Raider football team tomorrow night when they travel to Granby to take on the co-op of Granby/Canton at 6:30.

The Bears are ranked number three while the Raiders own the number 6 spot in the Class M playoff seedings.

Both teams posted 7-3 records during the regular season but each had a very different result in their last game played.

Torrington took care of rival Watertown by a 39-7 final at home while the Bears were blanked by the co=op of Gilbert/Northwestern/Housatonic, 21-0 at Van Why Field in Winsted.

The Raiders were last in the playoffs in 2015 when they fell to Wethersfield by a 33-6 final.

Previous to that game, the Raiders had made the states one other time, in 1983 when they lost to New London in a Class MM contest by a 24-0 final score.

Torrington’s Single Wing offense has been in full swing in 2021 and while opponents might think they know what’s coming, the multi-player backfield manned by Tyler Semonich, Sean Clinkscales and Exodus Rosado has proven very tough to handle.

The offense has produced an average of 29.3 points per game While the defense has given up an average of 19 this year but just 28 over their last three wins.

Granby/Canton has put up an average of 19.4 points while giving up just 16.5 per game.

The Bears had two tough losses, back to back in late October to Rockville (42-0) and Cromwell/Portland (45-6) before being shut out by the Yellowjackets on Thanksgiving Day.

The Raiders big wins came on the road versus Naugatuck (the eventual NVL Champion) by a 27-19 score and against Woodland in a 36-33 final.

Torrington was 3-2 after a tough opening schedule and 4-1 in the second half of the campaign.

The Bears started hot at 4-0 before going 3-3 the remainder of the season.

It was the Rockville 27-7 win over Ellington last Wednesday that shuffled the Class M standings, putting Torrington in the sixth spot.

The semi-finals are being played at the higher seed on Sunday at 12:30.

If the Raiders get by the Bears and Ellington (#7) pulls the upset, Torrington would be higher seed and play at home.

On the other side of the bracket, the co-op of Gilbert/Northwestern/Housatonic (#8) travel a long way to take on top seeded Killingly (9-0) while Avon (#4) hosts Branford (#5).

The finals will be played on Saturday, December 11 at a site to be determined.