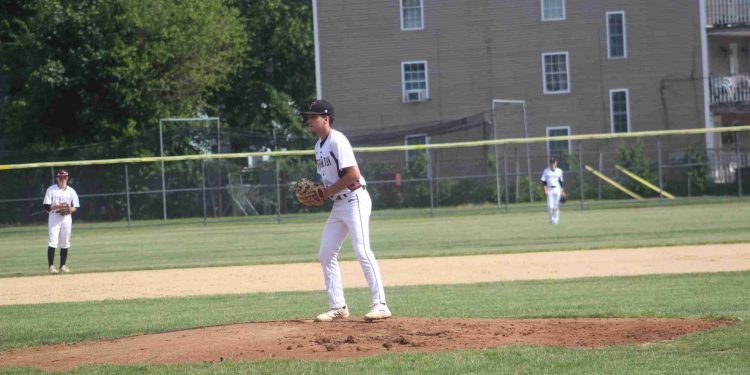 TORRINGTON: As he glanced back into his dugout before talking about what had transpired on the field over the previous two and a half hours, Raider coach Pat Richardson had to take a moment.

Not a moment that he may have expected when the season began, but a moment he will none the less cherish for a good long time.

His team had just battled back from a 6-1 deficit going into the bottom of the seventh inning with a determination that was the mark of the ’21 Raiders and while their dream of coming away with a remarkable win fell a hit short, it mattered not to their coach who was imply sad because of what had come to an end.

Wilton escaped Fuessenich Park with a 6-5 decision that puts them into the second round of the Class L State Tournament where they will travel to take on Woodstock on Tuesday in a second-round matchup.

Sometimes in the course of a coach’s career, a team comes along that leaves an imprint of a coach’s heart that lasts a lifetime.

This was one of those teams for Richardson.

“I can’t say enough about the character of this team,” Richardson said. “As far as character goes, this is the best group of guys that I have been around. From the time we started the year, they brought everything. They brought energy, and effort. They were just a special group of kids.”

That energy and effort nearly got them to the next round with a resounding bottom seven rally that saw them send ten men to the plate, chase a pair of Warriors pitchers, and have the bases loaded with two outs.

Sometimes the final hit doesn’t come but it doesn’t take away from the never say die attitude that the Raiders brought all season.

It didn’t look good for the host team, who end their campaign with a 13-8 overall record, when the visitors jumped out to a 3-0 lead after one inning, forcing a pitching change for Richardson.

Senior Corey Pray, who won big game after big game for his team this year, was replaced by sophomore Joe DiPippo in the second inning and the first-year varsity hurler earned his stripes for next season with his effort.

DiPippo went the rest of the way, allowing three runs (one earned) while keeping the game from getting too far out of reach which earned praise from his coach.

“He was becoming a junior on the mound today,” Richardson said, “He went from being a sophomore to a junior today on the mound.”

Wilton started their ace, junior Luca Wentzel who was dominant early, striking out the side in the first on his way to a one hit, eight strikeout efforts, before being replaced in the after walking two of the first three batters in the frame.

Torrington would break through with a run ion the frame on an RBI single by Brian Duman, only the second hit by the home team but one that cracked the ice that would break in the next frame.

Pray would lead off the last of the seventh with his second single of the game and moved to third on a double by Ben Smith.

Tyler Semonich got a run home with a grounder to short to make it a 6-2 ball game. A long fly to center by Roy Campbell moved Smith to third before a walk to Cooper Seminski but runners on the corners with one out.

Leadoff batter, Jason Karpeichik then laced a double down the right field line that made it a 6-3 game with runners on second and third. All this with two outs and each batter from here on out with two strikes on them.

Jacob Groebl then hit a soft liner to the left of second that got through for a two-RBI single and the home team was within one at 6-5 in dramatic fashion.

Despite loading the bases on a walk and a hit batter, the last hit proved to be elusive, but the loss did not diminish the effort the team showed.

That effort is what forced their coach to take a moment before he spoke.

“As coaches,” Richardson said. “We remember everybody, but this team will really be cherished by me. There was no selfishness on this team, none. Didn’t matter if we were down ten or got mercy ruled, they came right back the next day.”

The departure from the dugout one last time was tough for all, especially for their coach.

“It’s not about the loss, it’s about not being around these guys anymore.”

That’s a grateful coach of young men who needed a moment when it was all over.