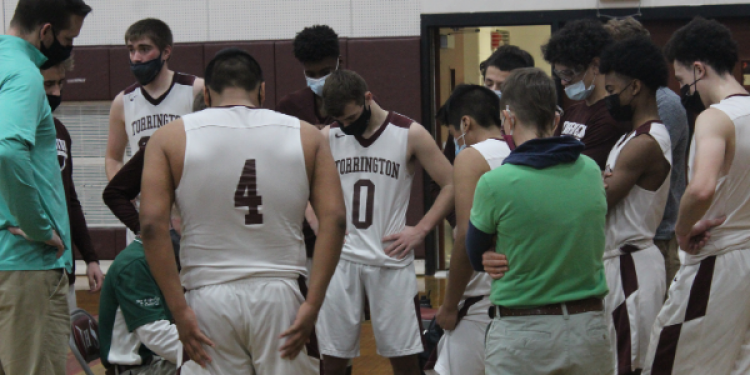 Raider Boys Fall In OT To Eagles But Battle Hard

TORRINGTON: Down 7-0 after nearly half the opening quarter in their game against Kennedy on Wednesday night, it looked like it was going to be a long night for the Torrington boys basketball team.

The Eagles, an athletic city team or threatening to run away with this one the Raiders regular season finale Before the home team shook off the rust and started to find their way.

They found themselves down just six at 19 to 13 after one quarter and just one at the half 29 to 28.

Joey White (10) and Ben Smith (8) helped cut the Eagles lead in half at 12 to 6 late in the first quarter an as head coach Eric Gamari had said before the game, if his team kept their head up and kept fighting, they would be in it..

It’s just what happened and it’s a very good omen as the regular season comes to an end and we look towards the future.

We saw a lot of fight out of the Raiders last night and an entertaining game they went to overtime before the visitors prevailed 63 to 59.

While Smith, White Charlie Matthieu and Brian Duman are graduating the cupboard is hardly bare, with lots of skilled players coming back.

It was the Raiders bench, after all, that got them back in the game after the slow start.

After struggling to get back close to the visitors most of the half, a three-pointer by Matthieu gave the home team their first lead just before the half.

Another Matthieu trey stopped a 5-0 third quarter run by the Eagles.

Buckets by Ben 0Smith and Brian DDuman kept the momentum going before Allen Smith put Torrington up 37-35 with 3:18 left in the third.

Kennedy was led by Lennox Serrano (20), John Cintron (17) and Sydciere Alves (15) and answered the challenge each time it arose.

The Eagles drove the basket on a constant basis, resulting in a 31-11 discrepancy from the free throw line.

Only connecting on 17 of those 31 chances helped the Raiders, who weren’t much better at 5 of 11 from the charity stripe.

Trailing 43-39 at the start of the fourth, the Raiders had their best stretch over the next three plus minutes as a 13-4 run gave them their biggest lead at 52-47 with 4:51 left in the quarter.

Three balls by Matthieu and Peter Duman fueled the run but a traditional three-point play by Serrano stopped the momentum and his long distance three with 54-seconds to play tied things at 56 and forced the extra frame.

Both teams had shots at winning outright in regulation but could not take advantage.

Four straight points by the visitors made it tough on the home team but a White three pointer made it a 60-59 game with 1:55 left in the four-minute extra frame.

Free throws would settle this one for the road team, but the Raiders take a great deal of positive out of this one and will look to utilize this fight in the future.